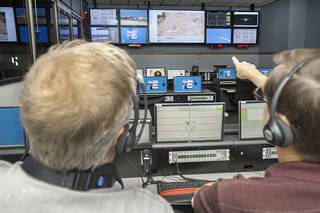 Engineers and researchers at NASA’s Armstrong Flight Research Center monitored the flights, and were able to observe the mapping of the sonic boom carpet from the F-18, from the center’s Mission Control Center.
Credits: NASA Photo / Ken Ulbrich

NASA pilots flying supersonic aircraft now have a display that tells them exactly where sonic booms are hitting the ground.

A series of flights, recently flown at NASA’s Armstrong Flight Research Center in Edwards, California, featured a display that allowed NASA research pilots the ability to physically see their sonic footprint on a map as the boom occurred. The series, which marked the second phase of the Cockpit Interactive Sonic Boom Display Avionics project, or CISBoomDA, continued from the project’s first phase, where only a flight test engineer could see the display.

With the ability to observe the location of their aircraft’s sonic booms, pilots can better keep the loud percussive sounds from disturbing communities on the ground.

Sonic booms occur when an aircraft’s speed exceeds Mach 1, the speed of sound, causing an air density change to occur and sending shockwaves away from the aircraft. Upon reaching the ground, those shockwaves are perceived audibly as a sometimes loud, disruptive sonic boom. Civilian aircraft are currently prohibited from flying supersonically over land, to prevent communities on the ground from being startled by sonic booms.

NASA has researched supersonic flight for decades, and is working to identify and develop the methods and tools necessary to mitigate the sonic boom. Recent research projects, such as the Background Oriented Schlieren using Celestial Objects, or BOSCO, and Sonic Booms in Atmospheric Turbulence, or SonicBAT, are helping engineers and researchers accomplish this, through further understanding of how supersonic shockwaves travel through the air.

CISBoomDA project manager Brett Pauer says the display will be a useful tool for supersonic-related projects in the future. 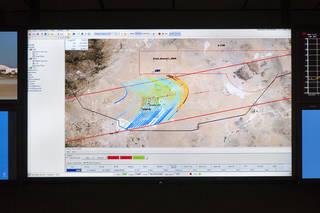 The CISBoomDA display allows the pilot of a supersonic aircraft to monitor the locations of any sonic booms produced, to prevent the aircraft from positioning booms in restricted areas.
Credits: NASA Photo / Ken Ulbrich

“The display is there to minimize the impact of sonic booms on the ground. Sonic booms generally don’t cause damage at higher altitudes, but they can disturb people, and we want to make sure that we are good stewards to the public,” said Pauer. “The use of this software allows pilots to maximize their flight, and still not bother people on the ground, if used properly.”

NASA’s supersonic research projects are helping engineers develop the means to design and build a proposed Low Boom Flight Demonstrator experimental aircraft, or X-plane, as part of the agency’s New Aviation Horizons initiative. The X-plane would be designed to demonstrate what NASA believes could be a quieter thump in place of the louder sonic boom. This could, in the future, introduce the opportunity to permit supersonic flight over land.

The display used in the CISBoomDA Phase II flights, however, is not limited to just the proposed X-plane, according to Pauer.

“This isn’t just for the Low Boom Flight Demonstrator, it’s for any supersonic aircraft. There are several companies that are looking to build supersonic aircraft that wouldn’t produce a low boom, and would still be restricted from supersonic flight over land. This would give them a way to show their sonic boom footprint over water,” explained Pauer. “So let’s say you’re flying from Miami to New York. You can see how far off the coast you need to be to not have that boom hit land.”

The display used in CISBoomDA Phase II was operated by the flight test engineer in the backseat of a NASA F-18 research aircraft, and was transmitted to the pilot’s display in the front seat. The project team integrated a research-quality GPS to feed into the system, updating the positioning software from the aircraft’s previous inertial navigation system, improving position accuracy to within 10 to 20 feet.

CISBoomDA principal investigator Ed Haering says the flights were designed to simulate boundaries on the ground, to help pilots practice monitoring the booms, and to keep the booms from impacting potentially populated areas. 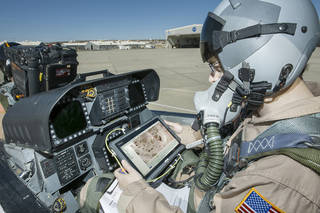 “We flew in the High Altitude Supersonic Corridor, which is one place we’re allowed to fly supersonically. The sonic boom carpet width, when you are 30,000 feet up, is about 30-miles wide. So we told him to fly as if the boundaries represent places you can’t boom past, and he flew to get the carpet to the edge of that boundary, but not past it,” Haering said.

The display is able to show the location of sonic booms based on tracking the aircraft’s trajectory and altitude, and is founded on an algorithm designed by Ken Plotkin of Wyle Laboratories, who died in 2015.

That algorithm is also being used by two companies, contracted by NASA, to develop similar displays, with more of a predictive element.

Honeywell Aerospace in Phoenix, Arizona, and Rockwell Collins in Cedar Rapids, Iowa, are both working in collaboration with NASA’s CISBoomDA project to develop displays with predictive capabilities. While the CISBoomDA display in NASA’s F-18 shows the real-time location of sonic booms, the displays being developed by Honeywell and Rockwell Collins, using the same algorithm, are looking to see where sonic boom locations would be on the ground, based on a planned flightpath.

“What Rockwell Collins and Honeywell are developing actually runs on the same algorithm as our display, but uses a predictive capability to show your booms on a proposed flightpath,” said Haering. “The pilot can adjust a proposed flightpath to avoid sonic booms in a particular spot, and then lock it in and fly that path.”

The display will ultimately be used to help NASA proceed with supersonic research in a way that minimizes disturbance on the ground and provides practice with the future of supersonic technology for pilots such as NASA research pilot Nils Larson.

“Flying with the CISBoomDA display was really interesting,” Larson stated. “It was great to have it in the cockpit, and I think it’s a valuable tool for the future. As a matter of fact, I’ve asked to be allowed to start using the display on my proficiency flights, just so I can keep practicing with it.”