Now in its final year of operations, on Nov. 30, 2016, NASA’s Cassini mission will begin a daring set of ring-grazing orbits, skimming past the outside edge of Saturn's main rings. Cassini will fly closer to Saturn’s rings than it has since its 2004 arrival. It will begin the closest study of the rings and offer unprecedented views of moons that orbit near them. Even more dramatic orbits ahead will bring Cassini closer to Saturn than any spacecraft has dared to go before.

A thrilling ride is about to begin for NASA's Cassini spacecraft. Engineers have been pumping up the spacecraft's orbit around Saturn this year to increase its tilt with respect to the planet's equator and rings. And on Nov. 30, following a gravitational nudge from Saturn's moon Titan, Cassini will enter the first phase of the mission's dramatic endgame.

Launched in 1997, Cassini has been touring the Saturn system since arriving there in 2004 for an up-close study of the planet, its rings and moons. During its journey, Cassini has made numerous dramatic discoveries, including a global ocean within Enceladus and liquid methane seas on Titan.

Between Nov. 30 and April 22, Cassini will circle high over and under the poles of Saturn, diving every seven days -- a total of 20 times -- through the unexplored region at the outer edge of the main rings.

"We're calling this phase of the mission Cassini's Ring-Grazing Orbits, because we'll be skimming past the outer edge of the rings," said Linda Spilker, Cassini project scientist at NASA's Jet Propulsion Laboratory, Pasadena, California. "In addition, we have two instruments that can sample particles and gases as we cross the ringplane, so in a sense Cassini is also 'grazing' on the rings."

On many of these passes, Cassini's instruments will attempt to directly sample ring particles and molecules of faint gases that are found close to the rings. During the first two orbits, the spacecraft will pass directly through an extremely faint ring produced by tiny meteors striking the two small moons Janus and Epimetheus. Ring crossings in March and April will send the spacecraft through the dusty outer reaches of the F ring.

"Even though we're flying closer to the F ring than we ever have, we'll still be more than 4,850 miles (7,800 kilometers) distant. There’s very little concern over dust hazard at that range," said Earl Maize, Cassini project manager at JPL.

The F ring marks the outer boundary of the main ring system; Saturn has several other, much fainter rings that lie farther from the planet. The F ring is complex and constantly changing: Cassini images have shown structures like bright streamers, wispy filaments and dark channels that appear and develop over mere hours. The ring is also quite narrow -- only about 500 miles (800 kilometers) wide. At its core is a denser region about 30 miles (50 kilometers) wide.

So Many Sights to See

Saturn's rings were named alphabetically in the order they were discovered. The narrow F ring marks the outer boundary of the main ring system.
Credits: NASA/JPL-Caltech/Space Science Institute

Cassini's ring-grazing orbits offer unprecedented opportunities to observe the menagerie of small moons that orbit in or near the edges of the rings, including best-ever looks at the moons Pandora, Atlas, Pan and Daphnis.

Grazing the edges of the rings also will provide some of the closest-ever studies of the outer portions of Saturn's main rings (the A, B and F rings). Some of Cassini's views will have a level of detail not seen since the spacecraft glided just above them during its arrival in 2004. The mission will begin imaging the rings in December along their entire width, resolving details smaller than 0.6 mile (1 kilometer) per pixel and building up Cassini's highest-quality complete scan of the rings' intricate structure.

The mission will continue investigating small-scale features in the A ring called "propellers," which reveal the presence of unseen moonlets. Because of their airplane propeller-like shapes, scientists have given some of the more persistent features informal names inspired by famous aviators, including "Earhart." Observing propellers at high resolution will likely reveal new details about their origin and structure.

And in March, while coasting through Saturn's shadow, Cassini will observe the rings backlit by the sun, in the hope of catching clouds of dust ejected by meteor impacts.

Preparing for the Finale

During these orbits, Cassini will pass as close as about 56,000 miles (90,000 kilometers) above Saturn's cloud tops. But even with all their exciting science, these orbits are merely a prelude to the planet-grazing passes that lie ahead. In April 2017, the spacecraft will begin its Grand Finale phase.

After nearly 20 years in space, the mission is drawing near its end because the spacecraft is running low on fuel. The Cassini team carefully designed the finale to conduct an extraordinary science investigation before sending the spacecraft into Saturn to protect its potentially habitable moons.

During its grand finale, Cassini will pass as close as 1,012 miles (1,628 kilometers) above the clouds as it dives repeatedly through the narrow gap between Saturn and its rings, before making its mission-ending plunge into the planet’s atmosphere on Sept. 15. But before the spacecraft can leap over the rings to begin its finale, some preparatory work remains.

To begin with, Cassini is scheduled to perform a brief burn of its main engine during the first super-close approach to the rings on Dec. 4. This maneuver is important for fine-tuning the orbit and setting the correct course to enable the remainder of the mission.

"This will be the 183rd and last currently planned firing of our main engine. Although we could still decide to use the engine again, the plan is to complete the remaining maneuvers using thrusters," said Maize.

To further prepare, Cassini will observe Saturn's atmosphere during the ring-grazing phase of the mission to more precisely determine how far it extends above the planet. Scientists have observed Saturn's outermost atmosphere to expand and contract slightly with the seasons since Cassini's arrival. Given this variability, the forthcoming data will be important for helping mission engineers determine how close they can safely fly the spacecraft.

Cassini used Titan’s gravity during the Titan 125 (T-125) flyby to put the spacecraft into its history-making Ring-Grazing Orbits. The spacecraft will be in an elliptical (egg-shaped) orbit inclined about 60 degrees from Saturn’s ring plane. On each orbit, Cassini will swoop down through the ring plane just 6,800 miles (about 11,000 kilometers) outside Saturn’s F ring. Each of Cassini’s orbits, known as Revs, or revolutions, begins when the spacecraft is at its most distant from Saturn, a position known as apoapse, and each of the ring-plane crossings happen around when Cassini is around its nearest point to Saturn, known as periapse.

The first Ring-Grazing Orbit begins on Nov. 30 with a ring plane crossing five days later on Dec. 4. The spacecraft will repeat this feat 20 times, with only about a week between each ring-plane crossing. Those orbits end with the spacecraft’s final close Titan flyby, T-126 in April, at which point Cassini enters a series of even more daring Grand Finale Orbits.

The summaries posted on this page for each ring-grazing orbit include only a few highlights of the many unparalleled science investigations that Cassini performs during these ambitious orbits.

On Cassini’s first ring-grazing dive past Saturn's F ring, the spacecraft’s Radio Scienceinstrument transmits a radio signal to Earth through Saturn’s rings in a uniquely long sweep. This observation occurs a few hours after the ring-plane crossing; during the crossing itself, Cassini will perform a brief burn of its main engine. Cassini will also study Saturn's northern hemisphere and atmosphere. Cassini’s Visual and Infrared Mapping Spectrometer will make a nine-hour movie of Saturn's north pole, and several instruments will measure the boundaries of Saturn's upper atmosphere, a critical observation, because future orbits will send Cassini skimming through the outermost reaches of the atmosphere for direct sampling. 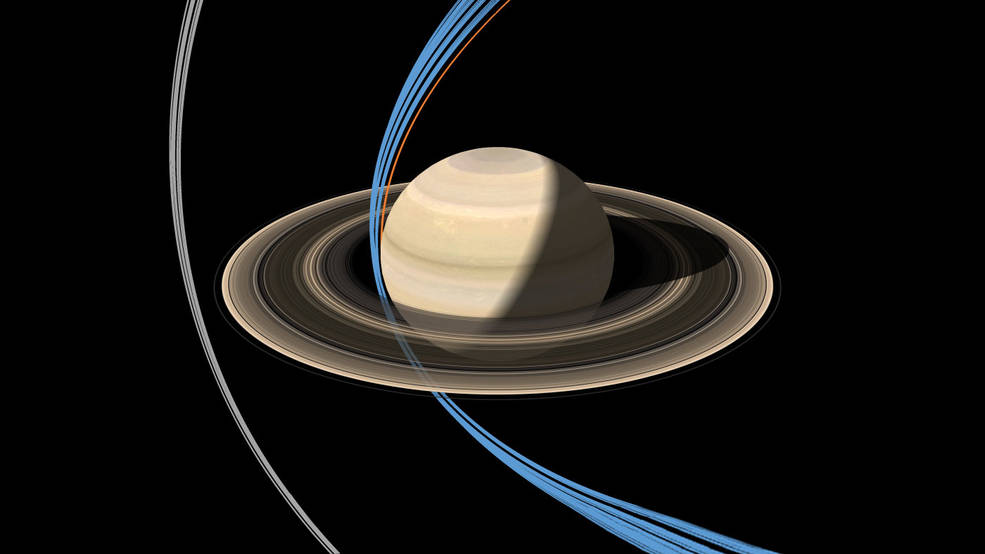 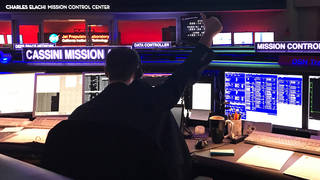 NASA's Saturn-orbiting Cassini spacecraft has made its first close dive past the outer edges of Saturn's rings since beginning its penultimate mission phase on Nov. 30.

About an hour prior to the ring-plane crossing, the spacecraft performed a short burn of its main engine that lasted about six seconds. About 30 minutes later, as it approached the ring plane, Cassini closed its canopy-like engine cover as a protective measure.

"With this small adjustment to the the spacecraft's trajectory, we're in excellent shape to make the most of this new phase of the mission," said Earl Maize, Cassini project manager at NASA's Jet Propulsion Laboratory, Pasadena, California.

A few hours after the ring-plane crossing, Cassini began a complete scan across the rings with its radio science experiment to study their structure in great detail.

"It's taken years of planning, but now that we're finally here, the whole Cassini team is excited to begin studying the data that come from these ring-grazing orbits," said Linda Spilker, Cassini project scientist at JPL. "This is a remarkable time in what's already been a thrilling journey."

Cassini's imaging cameras obtained views of Saturn about two days before crossing through the ring plane, but not near the time of closest approach. The focus of this first close pass was the engine maneuver and observations by Cassini's other science instruments. Future dives past the rings will feature some of the mission's best views of the outer regions of the rings and small, nearby moons.

Each of Cassini's orbits for the remainder of the mission will last one week. The next pass by the rings' outer edges is planned for Dec. 11. The ring-grazing orbits -- 20 in all -- will continue until April 22, when the last close flyby of Saturn's moon Titan will reshape Cassini's flight path. With that encounter, Cassini will leap over the rings, making the first of 22 plunges through the 1,500-mile-wide (2,400-kilometer) gap between Saturn and its innermost ring on April 26.

On Sept. 15, the mission will conclude with a final plunge into Saturn's atmosphere. During the plunge, Cassini will transmit data on the atmosphere's composition until its signal is lost.

Launched in 1997, Cassini has been touring the Saturn system since arriving there in 2004 for an up-close study of the planet, its rings and moons. During its journey, Cassini has made numerous dramatic discoveries, including a global ocean with indications of hydrothermal activity within the moon Enceladus, and liquid methane seas on another moon, Titan.