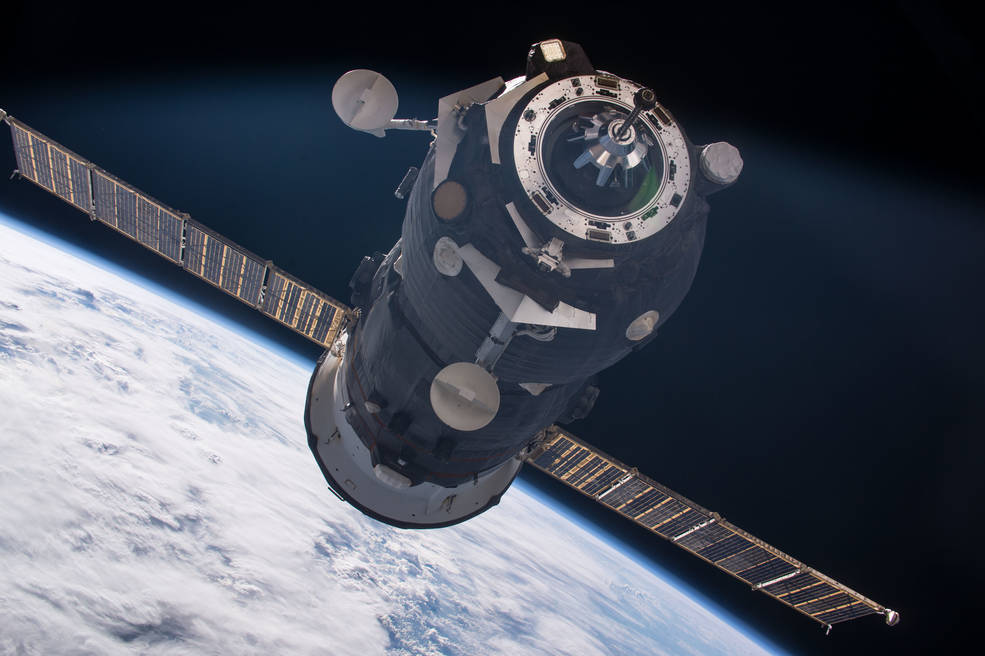 A Russian cargo spacecraft is set to launch Thursday, Dec. 1, to deliver more than two and a half tons of food, fuel and supplies to the International Space Station crew. Coverage on NASA Television and the agency’s website begins at 9:30 a.m. EST ahead of the 9:51 a.m. (8:51 p.m. Baikonur time) launch.

The unpiloted Russian Progress 65 will launch from the Baikonur Cosmodrome in Kazakhstan.

The spacecraft is set to dock to the rear port of the space station’s Zvezda Service Module at 11:43 a.m. Saturday, Dec. 3. NASA TV coverage of rendezvous and docking will begin at 11 a.m. The Progress 65 will spend more than six months docked to the station before departing in June for its deorbit into the Earth’s atmosphere. Launch of the ISS Progress 65 from the Baikonur Cosmodrome in Kazakhstan occurred at 9:51 a.m. EST (8:51 p.m. Baikonur time). Flight controllers are monitoring the spacecraft at this time and we are standing by for additional updates on Progress 65.

The Russian Progress spacecraft is carrying more than 2.6 tons of food, fuel, and supplies for the Expedition 50 crew aboard the International Space Station.

Launch of the ISS Progress 65 from the Baikonur Cosmodrome in Kazakhstan occurred at 9:51 a.m. EST (8:51 p.m. Baikonur time). An anomaly occurred sometime during the third stage operation. As we get updates from Roscosmos, we will provide them.

An H-II Transfer Vehicle (HTV)-6 from the Japan Aerospace Exploration Agency (JAXA) is scheduled to launch to the space station on Friday, Dec. 9.

Roscosmos launches Progress MS-04/65P – Suffers telemetry issues
December 1, 2016 by Chris Gebhardt no alt
The Russian Federal Space Agency (Roscosmos) launched the Progress MS-04/65P resupply mission to the ISS on Thursday at 09:51:52 EST (14:51:52 UTC). The mission is the third of three Russian resupply flights to Station this year and the first of two missions scheduled to launch to ISS in the opening 9 days of December. However, telemetry issues during third stage flight have concerned Russian controllers.

MOSCOW, December 1. Russia’s cargo spacecraft Progress MS-04, which developed telemetry transmission problems shortly after blastoff, may have already crashed in China or in the Pacific Ocean, a source in the space rocket industry has told TASS.

"Bearing in mind that the third-stage engines remained active less time than expected the spacecraft may have already crashed in China or the Pacific Ocean," the source said. 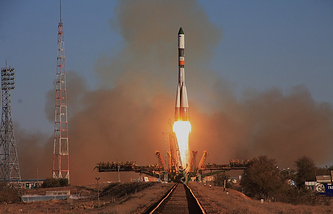 Progress MS-04 cargo spaceship blasted off for ISS from Baikonur

According to the official, the launch went wrong before the spacecraft’s separation from the rocket.

"If such a thing occurs 150 seconds before the separation, it is hard to expect anything else. Most probably the spacecraft has been lost already," the source said.

"True, it is possible that the separation did take place… but the spacecraft began to descend first and then may have burned up in the atmosphere," he added.

Earlier, Roscosmos said that problems occurred shortly after the launch of the Progress MS-04. Telemetry transmission was disrupted on the 383rd second. A TASS source in the space rocket industry said the flight went wrong when the third-stage engine RD-0110 manufactured by a design bureau in Voronezh was on.

The Soyuz-U rocket carrying the Progress MS-04 cargo spacecraft loaded with 2.5 tonnes of cargoes for the ISS crew, was launched from the Baikonur space site in Kazakhstan at 17:52 Moscow time.

KRASNOYARSK, December 1. Fragments of the Progress MS-04 cargo craft, which failed to reach orbit after launch from the Baikonur Space Center on Thursday, has presumably collapsed on to the ground in the south Siberian region of Tuva, a source in the regional law enforcement agencies said quoting eyewitness accounts.

"Eyewitnesses say they saw flashes in the area of Ishtii-Hem township where fragments might have fallen," the source said.

The Soyuz-U launch vehicle with the Progress MS-04 cargo craft lifted off from the Baikonur Space Center in Kazakhstan it 17:51 Moscow Standard Time (14:51 UTC). It was supposed to deliver 2.5 tons of payload to the International Space Station (ISS).

The Russian federal aerospace corporation Roscosmos said in a report later the spacecraft had developed equipment problems shortly after launch. Specifically, transmission of telemetric information stopped after 383 second into the flight.

A source in the missile building industry told TASS the problems emerged during the third stage burn.

The Soyuz-U carrier rocket might be replaced by another vehicle to launch the next Progress cargo spaceship in February 2017, a source in the space industry told TASS on Thursday.

"Specialists will check the Soyuz-U rocket. Should they have any claims, it will be replaced by another carrier rocket," he said

The source did not rule out that in case the loss of the Progress MS-04 is confirmed, the next cargo spaceship might be launched to the International Space Station (ISS) earlier than initially planned.

The Soyuz-U rocket carrying the Progress MS-04 cargo spacecraft loaded with 2.5 tonnes of cargoes for the ISS crew, was launched from the Baikonur space site in Kazakhstan at 17:52 Moscow time. Roscosmos said later that problems occurred shortly after the launch of the Progress MS-04. Telemetry transmission was disrupted on the 383rd second. A TASS source in the space rocket industry said the flight went wrong when the third-stage engine RD-0110 manufactured by a design bureau in Voronezh was on.

It was the Soyuz-U’s last but one launch. The last such carrier rocket is to be blasted off from Baikonur on February 2 with another Progress cargo spacecraft. Further launchers are planned to be conducted with the use of the Soyuz-2.1a carrier vehicle.

The Russian space agency Roscosmos has confirmed a Progress cargo resupply spacecraft bound for the International Space Station has been lost. The spacecraft launched from the Baikonur Cosmodrome in Kazakhstan Thursday on a Soyuz rocket, but experienced an anomaly around six and a half minutes into its flight.

Six crew members living aboard the space station are safe and have been informed of the mission’s status. Both the Russian and U.S. segments of the station continue to operate normally with onboard supplies at good levels.

The ISS Progress 65 cargo spacecraft launched on time from the Baikonur Cosmodrome in Kazakhstan at 9:51 a.m. EST (8:51 p.m. Baikonur time). The first few minutes of flight were normal, but Russian flight controllers reported telemetry data indicating a problem during third stage operation. The Russians have formed a State Commission and are the source for details on the specific failure cause.

The spacecraft was not carrying any supplies critical for the United States Operating Segment (USOS) of the station. The next mission scheduled to deliver cargo to the station is an H-II Transfer Vehicle (HTV)-6 from the Japan Aerospace Exploration Agency (JAXA) on Friday, Dec. 9.

Cargo packed inside the Progress 65 included more than 2.6 tons of food, fuel, and supplies for the space station crew, including approximately 1,400 pounds of propellant, 112 pounds of oxygen, 925 pounds of water, and 2,750 pounds of spare parts, supplies and scientific experiment hardware. Among the U.S. supplies on board were spare parts for the station’s environmental control and life support system, research hardware, crew supplies and crew clothing, all of which are replaceable. 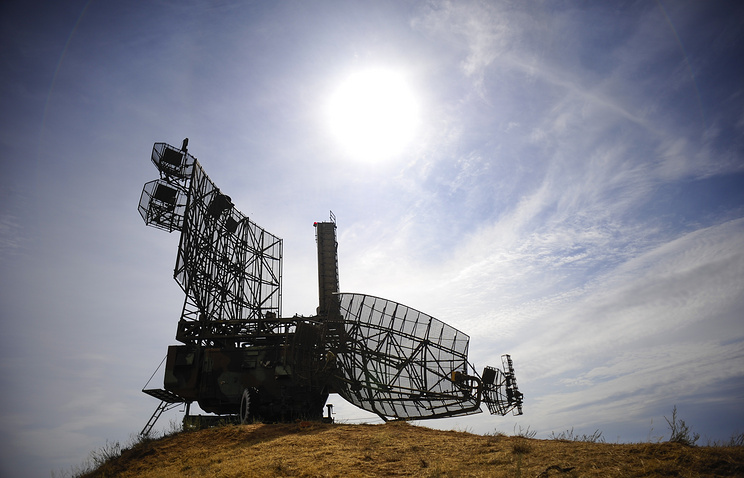 "Radio-technical means of the Central Military District’s air defense unit on December 1 identified two flying objects on radar screens at 17:56 and 17:57 Moscow time. Specialists studied their flight paths to arrive at the conclusion with nearly 100% certainty that the objects were fragments of the Progress spacecraft," Roshchupkin said.

Military personnel are not involved in search operations, the Central Military District said.

A cargo space vehicle of the Progress series, launched from the Baikonur space site in Kazakhstan at 17:51 Moscow time on Thursday was lost at an altitude of 190 kilometers over the Tyva region. Most of its fragments burned down in the atmosphere.

According to some reports several fragments may have reached the Earth’s surface in a sparsely populated area 60-80 kilometers west of the city of Kyzyl. Search groups of the Emergencies Ministry have inspected territories around four communities in the Ulug-Khem, Chaa-Khol and Sut-Khol districts of Tyva to find nothing.

KRASNOYARSK, A search team of the fire-fighting garrison in the Ulug-Khemsky district of the Republic of Tyva in south Siberia has not found any fragments of the defunct Progress MS-04 spacecraft at the expected crash site, the regional emergencies services told TASS on Friday.

According to an eye-witness’s evidence, the cargo spacecraft could have fallen in the outskirts of the village of Ishtii-Khem.

"An operational group of the fire-fighting garrison went to the scene to check information received by the integrated on-duty dispatch service of the Ulug-Khemsky district from a resident of the village of Ishtii-Khem that he had seen flashes high in the sky resembling falling stars. The group surveyed the adjacent territory around this populated area with a total radius of 2 km and the nearby forest from the village’s southern edge. No fragments of the fall of the cargo spacecraft have been found," the emergencies services said.

The cargo spacecraft Progress launched on Thursday from the Baikonur spaceport in Kazakhstan by a Soyuz-U carrier rocket to deliver supplies to the International Space Station (ISS) was lost at an altitude of 190 km above Tyva. Most of its fragments burned up in the dense layers of the Earth’s atmosphere, the press office of Russia’s State Space Corporation Roscosmos said.

The spacecraft’s remaining fragments could have fallen 60-80 km west of Kyzyl in a scarcely populated area, a source in the rocket and space industry said.

According to the source, specialists have notified all ministries and departments concerned, including Russia’s Emergencies Ministry, about the spacecraft’s accident and the expected crash site.

The Progress MS-04 spacecraft was expected to deliver about 2.5 tons of various cargoes to the world’s sole orbiter: fuel for the ISS, water and the air for cosmonauts. The spacecraft’s cargo compartment accommodated scientific equipment and spare parts, containers with foodstuffs, clothes, medicines and personal hygiene items.

Russia’s Emergencies Ministry has organized interaction with an air defense unit of the Defense Ministry in the search for the fragments of the failed cargo spacecraft, the ministry’s press office reported.

-
KRASNOYARSK, December 5. . Two more fragments of the Progress MS-04 cargo spacecraft have been found in the Republic of Tyva in south Siberia, the republican government’s press office told TASS on Monday.

"Another small fragment was found in the courtyard of a house in the village of Eilig-Khem," the press office quoted Tyva Head Sholban Kara-ool as saying. 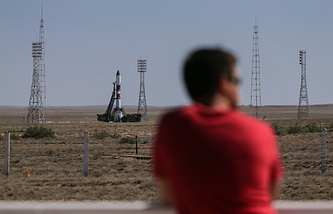 According to him, another fragment was found in the same terrain near a shepherd station.

As TASS reported earlier, the faulty spacecraft’s first fragment was found on Saturday 15 km from the village of Eilig-Khem in the area of Tos-Tevek of the Ulug-Khemsky district. A search team of the local fire-fighting garrison combed this area and found a fragment of the cargo spaceship in the form of a 90 cm metal spherical object on the slope of a mountain. Police organized the object’s protection until the arrival of a commission of Russia’s State Space Agency Roscosmos.

The cargo spacecraft Progress launched on Thursday from the Baikonur spaceport in Kazakhstan by a Soyuz-U carrier rocket to deliver supplies to the International Space Station (ISS) was lost at an altitude of 190 km above Tyva. Most of its fragments burned up in the dense layers of the Earth’s atmosphere, the Roscosmos press office said.

It was reported that the remaining fragments could have fallen 60-80 km west of Kyzyl in a scarcely-populated area. Emergencies Ministry teams searched four districts of Tyva but found no fragments.

As it was reported earlier, radar stations of Russia’s Central Military District registered the flight of two objects on December 1. After the analysis of the flight path, specialists came to the conclusion that these were fragments of the faulty Progress spacecraft.