TORONTO, A professional astrophysicist and an amateur astronomer have teamed up to reveal surprising details about an unusual millisecond pulsar (MSP) binary system comprising one of the fastest-spinning pulsars in our Galaxy and its unique companion star. 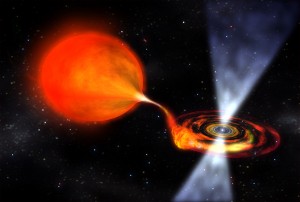 Artist’s rendition of a typical millisecond pulsar binary system in which the shape of the companion star (l.) is deformed by the gravitational pull of the pulsar (r.) seen emitting beams of radiation. Credit: NASA

Their observations, to be published in the Astrophysical Journal in December, are the first to identify “star spots” on an MSP’s companion star. Plus, the observations show that the companion has a strong magnetic field, and provide clues into why pulsars in some MSP binaries switch on and off.

John Antoniadis, a Dunlap Fellow with the Dunlap Institute for Astronomy & Astrophysics, University of Toronto, and André van Staden, an amateur astronomer from South Africa, analyzed observations of the brightness of the companion star made by van Staden over a 15-month period, with his 30cm reflector telescope and CCD camera in his backyard observatory in Western Cape. The analysis revealed an unexpected rise and fall in the star’s brightness.

In a typical MSP binary, the gravity of the pulsar distorts the shape of the companion star, pulling it into a teardrop-shape. As it circles the pulsar, we see a cyclical rise and fall in the companion’s brightness. The companion is brightest at two points in its orbit, when we see its broad, tear-shaped profile; it is dimmest midway between those two points, when we see its smallest, circular profile. Naturally, the light curve measuring the brightness rises and falls in step with the companion’s orbital period.

But Antoniadis and van Staden’s observations revealed that the brightness of the companion wasn’t in sync with its 15-hour orbital period; instead the star’s peaks in brightness occur progressively later relative to the companion’s orbital position.

They also realized that the companion star is not tidally locked to the pulsar—as the moon is to the Earth. Instead, they concluded that the companion’s rotational period is slightly shorter than its orbital period, resulting in the unexpected light curve.

The presence of starspots also led the collaborators to infer that the star has a strong magnetic field, a prerequisite of such spots.

A dedicated non-professional astronomer for many years, van Staden has a particular interest in pulsars and in 2014 came across Antoniadis’ research website listing MSP binaries with optical companions.

“I noted that the binary system MSP J1723-2837 is well suited for observing from South Africa,” van Staden says, “and that a light curve had not yet been determined for this particular system.”

“The dataset was unlike anything I had ever seen,” says Antoniadis on receiving van Staden’s data, “both in terms of quality and timespan. And I urged André to continue observing for as long as possible.”

Observations such as van Staden’s are critical in answering questions about the evolution and complex relationship between the MSP and its companion in “black widow” and “redback” binaries—pairs of stars in which the pulsar, like its arachnid namesake, devours its companion.

In a typical scenario, a newly formed neutron star feeds off of gas gravitationally pulled from the companion. As the pulsar gains mass, it also gains angular momentum and spins faster.

Eventually, the neutron star is rotating hundreds of times a second. At this point, it enters the next phase of its evolution. The neutron star begins to emit beams of intense radiation that we see as a rapidly pulsating signal: a pulsar is born.

At this point, the pulsar also begins to give off intense gamma-ray radiation and a strong stellar wind that staunch the flow of material from its neighbour. The companion is no longer being cannibalized by the pulsar, but it has only traded the means by which it is being consumed. Now the radiation and wind from the pulsar are so intense they begin to erode the doomed star.

As complex as these MSP binary systems are, they have only gotten more perplexing in recent years with observations that pulsars turn off and return to a state in which they are feeding off material from their companion—and that they can make this transition multiple times.

It has been suggested that the pulsar’s stellar wind and radiation may be behind the transition. But an additional result from Antoniadis and van Staden’s observations is that the stellar wind from the pulsar is not affecting the companion.

Typically, a pulsar’s strong stellar wind and intense radiation output create a “hotspot” on the pulsar-side of the companion. It is as if the star has a “day” and “night” side. But the presence of the hotspot was not detectable in the data. This could mean that the wind is either absent entirely or is blowing in a direction other than toward the star.

Either way, this suggests that the companion’s magnetic field—and not the pulsar’s stellar wind and radiation—may be the mechanism that turns off pulsars.