The concept image above shows Lunar Flashlight in a position over the south pole of the moon.
-
NASA’s Advanced Exploration Systems Division recently selected the Lunar Flashlight CubeSat as a secondary payload to fly aboard the Space Launch System’s Exploration Mission-1 (EM-1) flight. Lunar Flashlight, led by a team from the Jet Propulsion Laboratory and Marshall Space Flight Center, will map the lunar south pole for volatiles and demonstrate several technological firsts, including being the first CubeSat to reach the moon, the first planetary CubeSat mission to use green propulsion, and the first mission to use lasers to look for water ice.
Locating ice deposits in the moon’s permanently shadowed craters addresses one of NASA’s Strategic Knowledge Gaps (SKGs) to detect composition, quantity, distribution, form of water/H species and other volatiles associated with lunar cold traps. The scientific and economic importance of lunar volatiles extends far beyond the question “is there water on the moon?” Volatile materials including water come from sources central to NASA’s strategic plans, including comets, asteroids, interplanetary dust particles, interstellar molecular clouds, solar wind, and lunar volcanic and radiogenic gases. The volatile inventory, distribution, and state (bound or free, evenly distributed or blocky, on the surface or at depth, etc.) are crucial for understanding how these molecules interact with the lunar surface, and for utilization potential.
The Lunar Flashlight mission spacecraft maneuvers to its lunar polar orbit and uses its near infrared lasers to shine light into the shaded polar regions, while the on-board spectrometer measures surface reflection and composition. The Lunar Flashlight 6U spacecraft has heritage elements from predecessor systems including JPL’s INSPIRE and JPL’s experience with imaging spectrometers, including the Moon Mineralogy Mapper (M3). The mission will demonstrate a path where 6U CubeSats could, at dramatically lower cost than previously thought possible, explore, locate and estimate size and composition of ice deposits on the moon. It is a game-changing capability for expanded human exploration, planetary science, heliophysics, and other relevant instrument applications.
Polar volatile data collected by Lunar Flashlight could then ensure that future exploration targets for more expensive lander- and rover-borne measurements would include volatiles in sufficient quantity and near enough to the surface to potentially be operationally useful.
Quelle: NASA
----
Update: 30.10.2022
.

Set for a November launch, the small satellite mission will use lasers to search for water ice inside the darkest craters at the Moon’s South Pole.

It’s known that water ice exists below the lunar regolith (broken rock and dust), but scientists don’t yet understand whether surface ice frost covers the floors inside these cold craters. To find out, NASA is sending Lunar Flashlight, a small satellite (or SmallSat) no larger than a briefcase. Swooping low over the lunar South Pole, it will use lasers to shed light on these dark craters – much like a prospector looking for hidden treasure by shining a flashlight into a cave. The mission will launch aboard a SpaceX Falcon 9 rocket in mid-November.

“This launch will put the satellite on a trajectory that will take about three months to reach its science orbit,” said John Baker, the mission’s project manager at NASA’s Jet Propulsion Laboratory in Southern California. “Then Lunar Flashlight will try to find water ice on the surface of the Moon in places that nobody else has been able to look.” 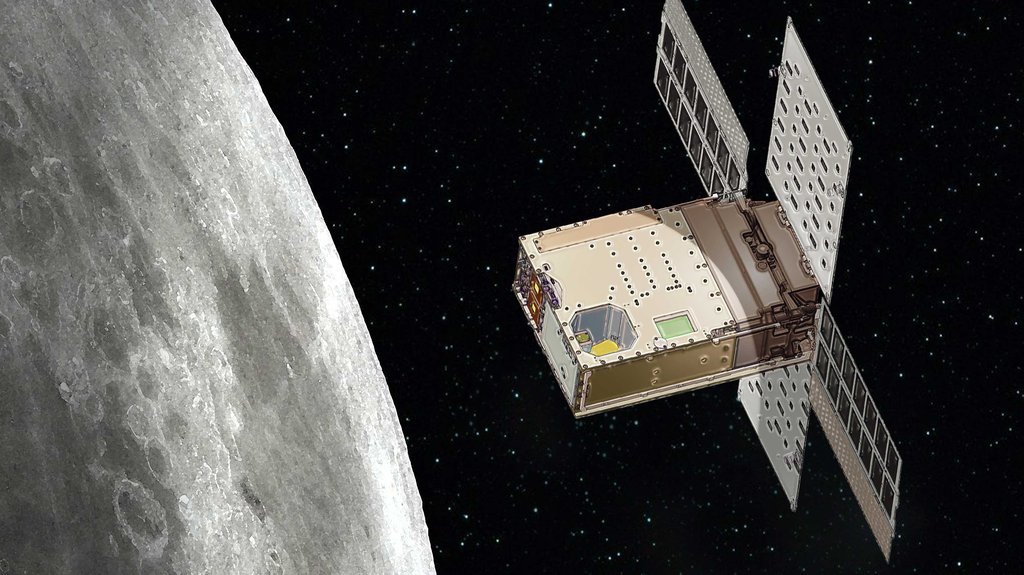 This illustration shows NASA’s Lunar Flashlight over the Moon. The SmallSat mission will have a very elongated orbit, taking it within 9 miles (15 kilometers) above the lunar South Pole to search for water ice in the Moon’s darkest craters.

After launch, mission navigators will guide the spacecraft way past the Moon. It will then be slowly pulled back by gravity from Earth and the Sun before it settles into a wide, looping, science-gathering orbit. This near-rectilinear halo orbit will take it 42,000 miles (70,000 kilometers) from the Moon at its most distant point and, at its closest approach, the satellite will graze the surface of the Moon, coming within 9 miles (15 kilometers) above the lunar South Pole.

SmallSats carry a limited amount of propellent, so fuel-intensive orbits aren’t possible. A near-rectilinear halo orbit requires far less fuel than traditional orbits, and Lunar Flashlight will be only the second NASA mission to use this type of trajectory. The first is NASA’s Cislunar Autonomous Positioning System Technology Operations and Navigation Experiment (CAPSTONE) mission, which will arrive at its orbit on Nov. 13, making its closest pass over the Moon’s North Pole.

“The reason for this orbit is to be able to come in close enough that Lunar Flashlight can shine its lasers and get a good return from the surface, but to also have a stable orbit that consumes little fuel,” said Barbara Cohen, Lunar Flashlight principal investigator at NASA’s Goddard Space Flight Center in Greenbelt, Maryland.

As a technology demonstration, Lunar Flashlight will be the first interplanetary spacecraft to use a new kind of “green” propellant that is safer to transport and store than the commonly used in-space propellants such as hydrazine. This new propellant, developed by the Air Force Research Laboratory and tested on a previous NASA technology demonstration mission, burns via a catalyst, rather than requiring a separate oxidizer. That is why it’s called a monopropellant. The satellite’s propulsion system was developed and built by NASA’s Marshall Space Flight Center in Huntsville, Alabama, with integration support from Georgia Tech Research Institute in Atlanta.