NASA’s Curiosity Mars rover used its Mast Camera, or Mastcam, to capture this panorama while driving toward the center of this scene, an area that forms the narrow “Paraitepuy Pass” on Aug. 14, the 3,563rd Martian day, or sol, of the mission. Credit: NASA/JPL-Caltech/MSSS

The rover has arrived at a special region believed to have formed as Mars’ climate was drying.

After journeying this summer through a narrow, sand-lined pass, NASA’s Curiosity Mars rover recently arrived in the “sulfate-bearing unit,” a long-sought region of Mount Sharp enriched with salty minerals.

Scientists hypothesize that billions of years ago, streams, and ponds left behind the minerals as the water dried up. Assuming the hypothesis is correct, these minerals offer tantalizing clues as to how – and why – the Red Planet’s climate changed from being more Earth-like to the frozen desert it is today.

The minerals were spotted by NASA’s Mars Reconnaissance Orbiter years before Curiosity landed in 2012, so scientists have been waiting a long time to see this terrain up close. Soon after arriving, the rover discovered a diverse array of rock types and signs of past water, among them popcorn-textured nodules and salty minerals such as magnesium sulfate (Epsom salt is one kind), calcium sulfate (including gypsum), and sodium chloride (ordinary table salt). 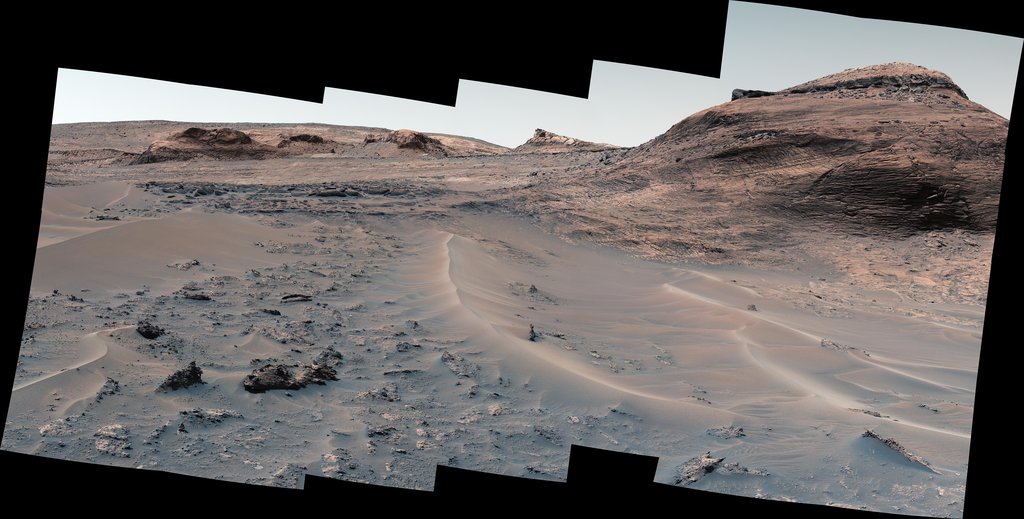 NASA's Curiosity Mars rover used its Mast Camera, or Mastcam, to capture this panorama of a hill nicknamed Bolívar and adjacent sand ridges on Aug. 23, the 3,572nd Martian day, or sol, of the mission.
Credit: NASA/JPL-Caltech/MSSS
Full Image Details

They selected a rock nicknamed “Canaima” for the mission’s 36th drill sample, and choosing was no easy task. Along with scientific considerations, the team had to factor in the rover hardware. Curiosity uses a percussive, or jackhammering, rotary drill at the end of its 7-foot (2-meter) arm to pulverize rock samples for analysis. Worn brakes on the arm recently led the team to conclude that some harder rocks may require too much hammering to drill safely.

“As we do before every drill, we brushed away the dust and then poked the top surface of Canaima with the drill. The lack of scratch marks or indentations was an indication that it may prove difficult to drill,” said Curiosity’s new project manager, Kathya Zamora-Garcia of NASA’s Jet Propulsion Laboratory in Southern California. “We paused to consider whether that posed any risk to our arm. With the new drilling algorithm, created to minimize the use of percussion, we felt comfortable collecting a sample of Canaima. As it turned out, no percussion was needed.”

The mission’s scientists look forward to analyzing portions of the sample with the Chemical and Minerology instrument (CheMin) and the Sample Analysis at Mars instrument (SAM). 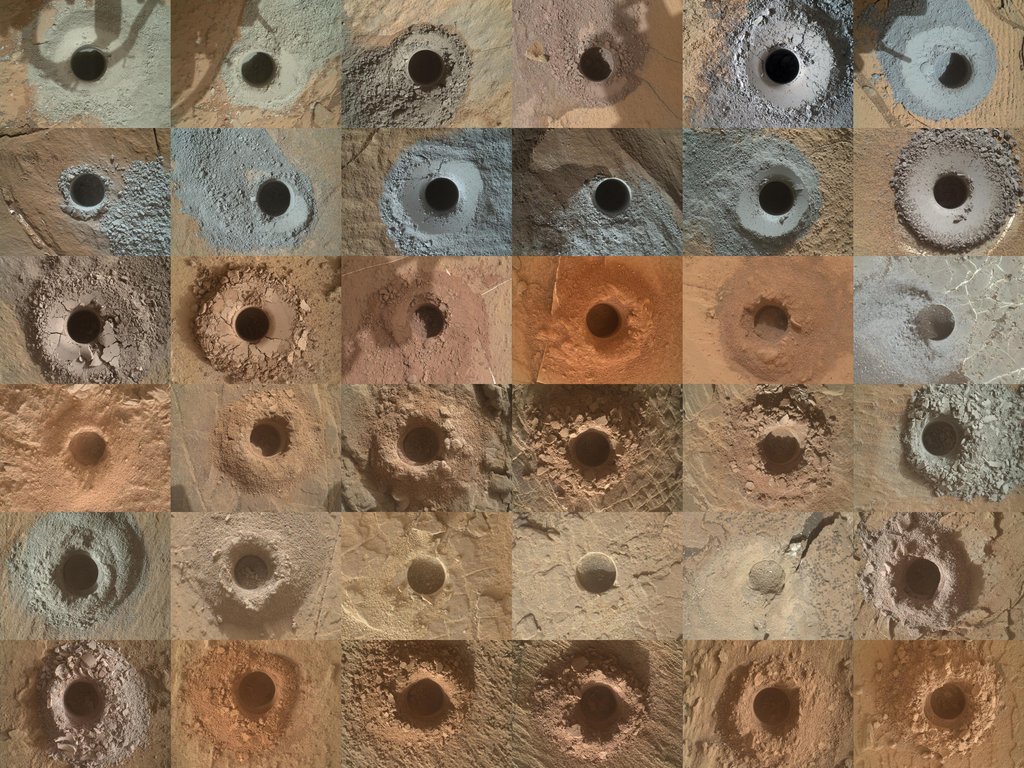 This grid shows all 36 holes drilled by NASA's Curiosity Mars rover using the drill on the end of its robotic arm. The images in the grid were captured by the Mars Hand Lens Imager (MAHLI) on the end of Curiosity's arm.
Credit: NASA/JPL-Caltech/MSSS
Full Image Details

The journey to the sulfate-rich region took Curiosity through treacherous terrain, including, this past August, the sandy “Paraitepuy Pass,” which snakes between high hills. It took the rover more than a month to safely navigate in order to finally reach its destination.

While sharp rocks can damage Curiosity’s wheels (which have plenty of life left in them), sand can be just as hazardous, potentially causing the rover to get stuck if the wheels lose traction. Rover drivers need to carefully navigate these areas.

The hills blocked Curiosity’s view of the sky, requiring the rover to be carefully oriented based on where it could point its antennas toward Earth and how long it could communicate with orbiters passing overhead. 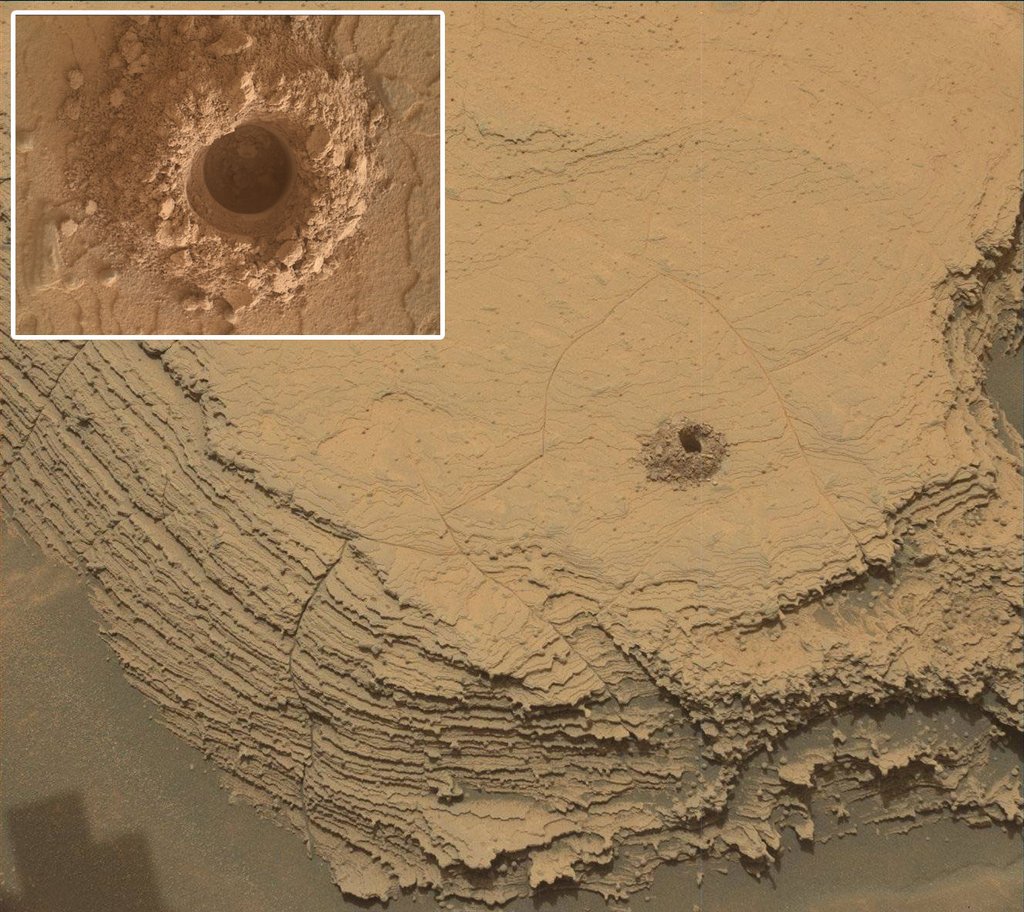 After braving those risks, the team was rewarded with some of the most inspiring scenery of the mission, which the rover captured with an Aug. 14 panorama using its Mast Camera, or Mastcam.

“We would get new images every morning and just be in awe,” said Elena Amador-French of JPL, Curiosity’s science operations coordinator, who manages collaboration between the science and engineering teams. “The sand ridges were gorgeous. You see perfect little rover tracks on them. And the cliffs were beautiful – we got really close to the walls.”

But this new region comes with its own challenges: While scientifically compelling, the rockier terrain makes it harder to find a place where all six of Curiosity’s wheels are on stable ground. If the rover isn’t stable, engineers won’t risk unstowing the arm, in case it might bang into the jagged rocks.

“The more and more interesting the science results get, the more obstacles Mars seems to throw at us,” Amador-French said.

But the rover, which recently marked its 10th year on Mars, and its team are ready for this next chapter of their adventure.