Space probes have witnessed a big impact crater being formed on Mars - the largest in the Solar System ever caught in the act of excavation.

And its blast zone would fit neatly in the area inside the UK capital's orbital motorway, the M25.

Scientists detected the event using the seismometer on the US space agency's InSight lander. The probe picked up the ground vibrations.

Confirmation came from follow-up imagery acquired by Nasa's Mars Reconnaissance Orbiter (MRO). This satellite routinely pictures the planet and could produce the before-and-after proof of a major surface disturbance, corresponding to the exact timing and in the expected direction and distance (3,500km) from InSight.

"This is the biggest new crater we've ever seen," said Dr Ingrid Daubar from Brown University. "It's about 500ft wide, or about two city blocks across, and even though meteorites are hitting the planet all the time, this crater is more than 10 times larger than the typical new craters we see forming on Mars.

"We thought a crater this size might form somewhere on the planet once every few decades, maybe once a generation, so it was very exciting to be able to witness this event."

The impact was about 3,500km from InSight's location on Mars

The post-impact observation shows huge chunks of buried water-ice have been excavated and thrown around the edges of the crater. Buried water-ice has never before been seen so close to Mars' equator.

Such deposits would be an important resource for future human missions to the planet.

"That ice can be converted into water, oxygen or hydrogen. That could be really useful," said Dr Lori Glaze, Nasa's director of planetary science.

Using its French/UK-built seismometer instrument, Nasa's Insight lander has detected more than 1,300 quakes on Mars since its arrival in November 2018. But the Magnitude 4 tremor resulting from this particular event, which occurred on 24 December, 2021, immediately piqued the interest of mission scientists because it contained a component of so-called "surface waves".

The vast majority of quakes picked up by InSight have produced the traditional primary and secondary waves associated with rock movements deep within the planet.

These newly detected ripples were travelling in the uppermost portion of Mars, through its crust.

"This is the first-time seismic surface waves have been observed on a planet other than Earth. Not even the Apollo missions to the Moon managed it," said Doyeon Kim from ETH Zurich's Institute of Geophysics and a lead author on the scholarly reports appearing in Science Magazine this week.

The recognition of surface waves also enabled the researchers to identify a second meteorite strike. This one, on 18 September, 2021, occurred roughly 7,500km from InSight. It was a slightly smaller event and produced a cluster of craters, the largest of which was 130m in diameter.

Scientists think both impacts can provide fresh knowledge about Mars' interior. Whereas the deeply sourced quakes tell them about the structure and composition of the planet's mantle and core, the surface waves reveal new details about the overlying crust.

Researchers can tell that in between the InSight lander and the impact sites, the crust has a very uniform structure and high density. This contrasts with the previously reported three layers of low-density crust directly below InSight.

This realisation may have something to say, too, about the famous Mars dichotomy - the observation that the Northern Hemisphere is low and relatively flat, whereas the Southern Hemisphere of the planet is high and mountainous.

Researchers have wondered whether that's because the crust in these regions is composed of different materials. But the new surface wave data and its suggestion of widespread uniformity in the crust would imply this theory is probably not the best explanation.

"InSight's observations in the transition zone between the North and the South have been really valuable because clearly the crust evolved in very different ways in those regions of the planet," he told BBC News.

"How and why they developed the way they did is still an open question, but I think these impact events have probably provided more understanding on this topic than anything else we've done so far on the mission."

There are many craters on Mars, the consequence of billions of years of bombardment from rocks drifting through space. Some are true giants. The Hellas Basin is an impact structure over 2,000km in diameter.

But the 2021 impacts are significant because scientists have the instrument data recording the moment of their creation.

"Something like [the 24 December impactor] hits Earth a few times every decade, but burns up safely in the atmosphere or drops a few meteorites. We were amazingly lucky to catch this one while InSight was listening," commented Prof Gareth Collins from Imperial College London.

The InSight mission is close to ending. Dust is settling on its solar panels, reducing their efficiency.

"In the next short amount of time, perhaps somewhere between four and eight weeks as best we can can predict, we expect the lander to not have enough power to operate any longer," the mission's principal investigator Dr Bruce Banerdt told reporters. 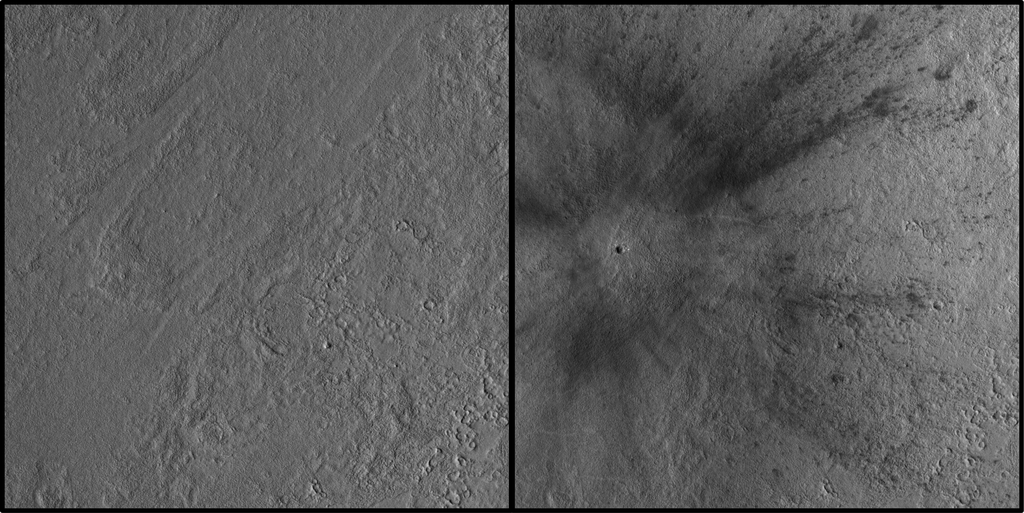 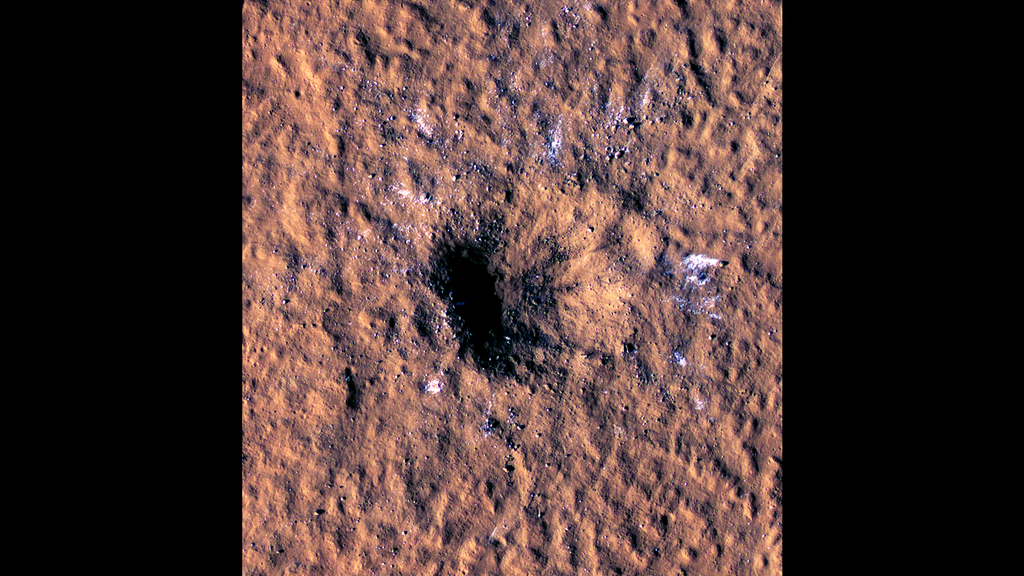 Boulder-size blocks of water ice can be seen around the rim of an impact crater on Mars, as viewed by the High-Resolution Imaging Science Experiment (HiRISE camera) aboard NASA’s Mars Reconnaissance Orbiter. The crater was formed Dec. 24, 2021, by a meteoroid strike in the Amazonis Planitia region. 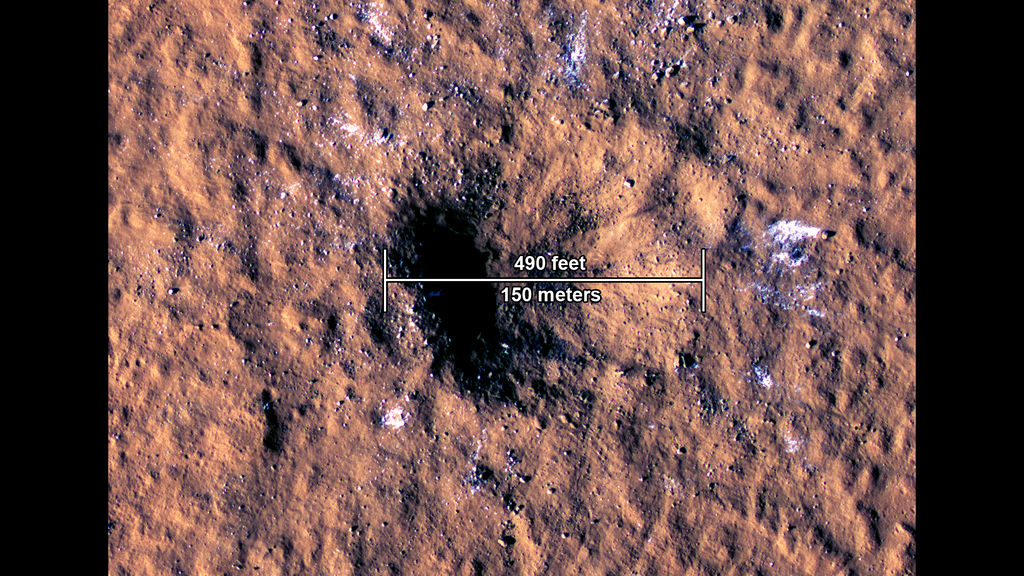 The agency’s lander felt the ground shake during the impact while cameras aboard the Mars Reconnaissance Orbiter spotted the yawning new crater from space.

NASA’s InSight lander recorded a magnitude 4 marsquake last Dec. 24, but scientists learned only later the cause of that quake: a meteoroid strike estimated to be one of the biggest seen on Mars since NASA began exploring the cosmos. What’s more, the meteoroid excavated boulder-size chunks of ice buried closer to the Martian equator than ever found before – a discovery with implications for NASA’s future plans to send astronauts to the Red Planet.

Scientists determined the quake resulted from a meteoroid impact when they looked at before-and-after images from NASA’s Mars Reconnaissance Orbiter (MRO) and spotted a new, yawning crater. Offering a rare opportunity to see how a large impact shook the ground on Mars, the event and its effects are detailed in two papers published Thursday, Oct. 27, in the journal Science.

The meteoroid is estimated to have spanned 16 to 39 feet (5 to 12 meters) – small enough that it would have burned up in Earth’s atmosphere, but not in Mars’ thin atmosphere, which is just 1% as dense as our planet’s. The impact, in a region called Amazonis Planitia, blasted a crater roughly 492 feet (150 meters) across and 70 feet (21 meters) deep. Some of the ejecta thrown by the impact flew as far as 23 miles (37 kilometers) away.

With images and seismic data documenting the event, this is believed to be one of the largest craters ever witnessed forming any place in the solar system. Many larger craters exist on the Red Planet, but they are significantly older and predate any Mars mission.

This video includes a seismogram and sonification of the signals recorded by NASA’s InSight Mars lander, which detected a giant meteoroid strike on Dec. 24, 2021, the 1,094th Martian day, or sol, of the mission.

“It’s unprecedented to find a fresh impact of this size,” said Ingrid Daubar of Brown University, who leads InSight’s Impact Science Working Group. “It’s an exciting moment in geologic history, and we got to witness it.”

InSight has seen its power drastically decline in recent months due to dust settling on its solar panels. The spacecraft now is expected to shut down within the next six weeks, bringing the mission’s science to an end.

InSight is studying the planet’s crust, mantle, and core. Seismic waves are key to the mission and have revealed the size, depth, and composition of Mars’ inner layers. Since landing in November 2018, InSight has detected 1,318 marsquakes, including several caused by smaller meteoroid impacts.

But the quake resulting from last December’s impact was the first observed to have surface waves – a kind of seismic wave that ripples along the top of a planet’s crust. The second of the two Science papers related to the big impact describes how scientists use these waves to study the structure of Mars’ crust.

In late 2021, InSight scientists reported to the rest of the team they had detected a major marsquake on Dec. 24. The crater was first spotted on Feb. 11, 2022, by scientists working at Malin Space Science Systems (MSSS), which built and operates two cameras aboard MRO. The Context Camera (CTX) provides black-and-white, medium-resolution images, while the Mars Color Imager (MARCI) produces daily maps of the entire planet, allowing scientists to track large-scale weather changes like the recent regional dust storm that further diminished InSight’s solar power.

The impact’s blast zone was visible in MARCI data that allowed the team to pin down a 24-hour period within which the impact occurred. These observations correlated with the seismic epicenter, conclusively demonstrating that a meteoroid impact caused the large Dec. 24 marsquake.

“The image of the impact was unlike any I had seen before, with the massive crater, the exposed ice, and the dramatic blast zone preserved in the Martian dust,” said Liliya Posiolova, who leads the Orbital Science and Operations Group at MSSS. “I couldn’t help but imagine what it must have been like to witness the impact, the atmospheric blast, and debris ejected miles downrange.”

This animation depicts a flyover of a meteoroid impact crater on Mars that’s surrounded by boulder-size chunks of ice. The animation was created using data from the High-Resolution Imaging Science Experiment (HiRISE) camera aboard NASA’s Mars Reconnaissance Orbiter.

Establishing the rate at which craters appear on Mars is critical for refining the planet’s geologic timeline. On older surfaces, such as those of Mars and our Moon, there are more craters than on Earth; on our planet, the processes of erosion and plate tectonics erase older features from the surface.

New craters also expose materials below the surface. In this case, large chunks of ice scattered by the impact were viewed by MRO’s High-Resolution Imaging Science Experiment (HiRISE) color camera.

Subsurface ice will be a vital resource for astronauts, who could use it for a variety of needs, including drinking water, agriculture, and rocket propellant. Buried ice has never been spotted this close to the Martian equator, which, as the warmest part of Mars, is an appealing location for astronauts.

More About the Missions