Venus Oxygen Fugacity (VfOx) is a small, button-sized sensor aboard NASA’s DAVINCI mission to Venus’ atmosphere that will be designed, fabricated, tested, operated, and analyzed by undergraduate and graduate students as the mission’s Student Collaboration Experiment.

DAVINCI will send a meter-diameter probe to brave the high temperatures and pressures near Venus’ surface to explore the atmosphere from above the clouds to near the surface of a terrain that may have been a past continent. During its final kilometers of free-fall descent (artist's impression shown here), the probe will capture spectacular images and chemistry measurements of the deepest atmosphere on Venus for the first time.
Credits: NASA/GSFC/CI Labs

Planned for launch in 2029, the DAVINCI mission (Deep Atmosphere Venus Investigation of Noble gases, Chemistry, and Imaging) will send a spacecraft and a probe to Venus to investigate numerous unsolved mysteries of the planet. Prior to dropping its descent probe into the Venus atmosphere, the spacecraft will perform two flybys of the planet, taking measurements of clouds and ultraviolet absorption on the Venusian day side, and taking measurements of heat emanating from the planet’s surface on the night side. Two years after launch, the mission’s probe, called the Descent Sphere, will enter the Venus atmosphere, ingesting and analyzing atmospheric gases and collecting images as it descends to the surface of the planet at the Alpha Regio region.

VfOx will be mounted on the outside of the Descent Sphere, where it will measure the oxygen fugacity – the partial pressure of the oxygen – in the deep atmosphere beneath Venus’ clouds, including the near-surface environment.

By analyzing these ground-breaking VfOx measurements, scientists will, for the first time, seek to identify what minerals are most stable at the surface of Venus in the highlands and link the formation of rocks to their recent modification histories. VfOx will measure the amount of oxygen present near the surface of Venus as a “fingerprint” of the rock-atmosphere reactions that are going on today. The balance of how much oxygen is present in the atmosphere, compared to the amount of oxygen captured in the rocks of Venus, will provide information towards a new understanding of the surface minerals in a mountainous region of Venus (known as “tessera”) that has never been visited by a spacecraft.

Understanding how much oxygen is contained in Venus’ atmosphere will be important in preparation for characterizing Venus-like worlds beyond our solar system with the JWST and future observatories. How much oxygen Venus has in its deepest atmosphere will help scientists studying these remote worlds distinguish between oxygen produced by life, such as what happens on Earth, from oxygen produced solely by abiotic chemical planetary processes, such as what happens on Venus. 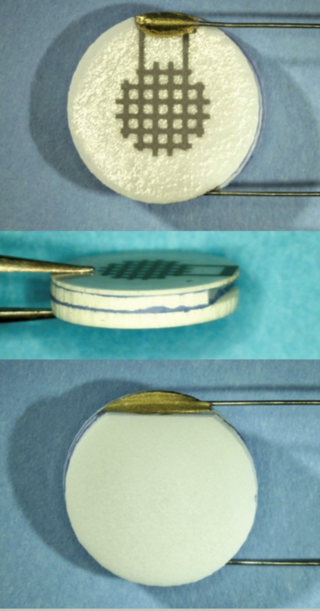 These images of a prototype of the shirt-button-sized VfOx instrument show the disk of the sensor itself. It has a diameter of just under one centimeter (almost 0.4 inches) and will be located on the side of the DAVINCI Descent Sphere.
Credits: Johns Hopkins APL

The instrument will operate similarly to the oxygen sensor in many automobile engines, which measures the amount of oxygen in the fuel system relative to other components of the fuel. Like all instruments aboard the DAVINCI Descent Sphere, VfOx must be adapted to survive Venus’ inhospitable atmosphere. Even though temperatures at the surface of the planet are hot enough to melt lead, the temperatures in internal combustion car engines are even hotter, so VfOx will operate in a comparatively cooler environment on Venus. Additionally, VfOx will be built out of ceramic, a material that is resistant to temperature changes.

The motivating goal for DAVINCI’s Student Collaboration Experiment is educating and training young scientists and engineers in planetary science and engineering skills and providing a real-world application for those skills. “We are trying to engage and encourage the next generation of planetary scientists and engineers,” says Dr. Noam Izenberg, principal research staff at the Johns Hopkins University Applied Physics Laboratory in Laurel, Maryland, and student collaboration lead for VfOx on DAVINCI.

Students will build the VfOx instrument, analyze the data it returns from Venus, and participate in science activities with the DAVINCI science team. Students involved will be advised by faculty at the Johns Hopkins University in Baltimore.

The excitement of being actively involved with a real space-flight mission as an undergraduate may be one of the best incentives to attract a diverse group of students to this project. “We want to attract more students from all backgrounds, including the less-advantaged and the less-represented,” says Dr. Izenberg. “There will be lots of mentors across the board – on the mission and science side, and the engineering side – where students can find not just mentors of the professions that they might be looking for, but also mentors who look like them, because the DAVINCI team itself is fairly good in its own diversity.”

Johns Hopkins will be working in collaboration with the Applied Physics Lab to plan and implement the student experiment. Johns Hopkins will also work in collaboration with the Maryland Institute College of Arts in Baltimore, which has an extreme arts institute that will be involved with an intersection between science and art. The Hopkins Extreme Materials Institute in Baltimore will help coordinate this project, and Morgan State University in Baltimore is an intended partner.

NASA’s Goddard Space Flight Center in Greenbelt, Maryland, is the principal investigator institution for DAVINCI and will perform project management and scientific leadership for the mission, as well as project systems engineering to develop the probe flight system. Goddard also leads the project science support team and provides two key instruments on the probe.

NASA Instrument to Measure Temperature, Pressure, and Wind on Venus

The VASI (Venus Atmospheric Structure Investigation) instrument aboard NASA’s Deep Atmosphere Venus Investigation of Noble gases, Chemistry, and Imaging, or DAVINCI, mission to Venus, together with the other instruments on this mission, aims to investigate Venus’ mysterious atmosphere by painting a more detailed picture of it than ever before.

DAVINCI will send a meter-diameter probe to brave the high temperatures and pressures near Venus’ surface to explore the atmosphere from above the clouds to near the surface of a terrain that may have been a past continent. During its final kilometers of free-fall descent (shown here), the probe will capture spectacular images and chemistry measurements of the deepest atmosphere on Venus for the first time.
Credits: NASA GSFC visualization by CI Labs Michael Lentz and others

VASI will be installed on the DAVINCI mission’s descent sphere to parachute through Venus’ atmosphere. The descent sphere carries a sophisticated suite of five instruments, including VASI, collectively designed to study the characteristics of the atmosphere and measure how they change as it descends.

VASI measurements will provide new information about Venus’ temperature, pressure and winds and will provide the primary altitude reference for the descent sphere’s atmospheric composition instruments during the plunge into Venus’ searing, crushing atmosphere. 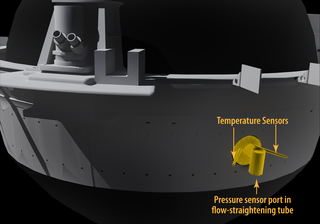 Computer rendering of the VASI instrument on the side of the DAVINCI Descent Sphere (probe).
Credits: NASA/GSFC

“​​There are actually some big puzzles about the deep atmosphere of Venus,” said Ralph Lorenz, a scientist at Johns Hopkins Applied Physics Laboratory (APL) in Laurel, Maryland, who is the science lead for the VASI instrument. “We don't have all the pieces of that puzzle and DAVINCI will give us those pieces by measuring the composition at the same time as the pressure and temperature as we get near the surface.”

Among the many mysteries of the thick Venusian atmosphere are its structure, how volcanoes may have interacted with the atmosphere, and what that interaction can tell us about Earth’s future.

“The long-term habitability of our planet, as we understand it, rests on the coupling of the interior and atmosphere,” said Lorenz. “The long-term abundance of carbon dioxide in our atmosphere, which we really rely on to have kept Earth’s surface warm enough to be habitable over geologic time, relies on volcanoes.” One key question is whether volcanoes are still active on Venus. Detailed, altitude-resolved measurements of the atmospheric temperatures, winds and composition will contribute to answering this question.

Yet clouds of sulfuric acid, surface atmospheric pressure about 90 times higher than Earth’s, and surface temperatures around 900 F (about 460 C) make Venus incredibly challenging to explore, and it’s a herculean task to create instruments that can make sensitive measurements while being exposed to Venus’ harsh environment. Because of this, most of DAVINCI’s sensors and other subsystems are enclosed in a descent sphere built like a submarine, with sturdy construction to withstand the intense atmospheric pressures and effective insulation to shield these systems from the intense heat near Venus’ surface. However, VASI’s sensors must be directly exposed to these harsh conditions to do their job.

“Venus is hard. The conditions, especially low in the atmosphere, make it very challenging to engineer the instrumentation and the systems to support the instrumentation,” Lorenz said. “All that has to be either protected from the environment or somehow built to tolerate it.”

As the sphere descends toward the surface of Venus, VASI will record the atmosphere’s temperature variations with a temperature sensor wrapped in a thin metal tube, like a straw. The atmosphere heats up the tube, which the sensor measures and records while being protected from the corrosive environment.

Simultaneously, VASI will measure atmospheric pressure using a small silicon membrane encased in the instrument. On one side of the membrane is a vacuum, and on the other is Venus’ atmosphere, which will push on the membrane and stretch it. This stretch will be measured and used to calculate the strength of the pressure.

The various sensors and housings for VASI are being assembled by NASA’s Goddard Space Flight Center in Greenbelt, Maryland, with science direction from APL’s Lorenz. The Doppler measurements are implemented in DAVINCI’s radio system, which is built at APL.

NASA Goddard is the principal investigator institution for DAVINCI and will perform project management for the mission, provide science instruments as well as project systems engineering to develop the descent sphere. Goddard also leads the project science support team with an external science team from across the U.S. and including international participation.