What happens when the densest, most massive stars – that are also super small – collide? They send out brilliant explosions known as kilonovae. Think of these events as the universe’s natural fireworks. Theorists suspect they periodically occur all across the cosmos – both near and far. Scientists will soon have an additional observatory to help follow up on and even scout these remarkable events: NASA’s Nancy Grace Roman Space Telescope, which is set to launch by May 2027.

The key actors in kilonovae are neutron stars, the central cores of stars that collapsed under gravity during supernova explosions. They each have a mass similar to the Sun, but are only about 6 miles (10 kilometers) in diameter. And when they collide, they send out debris moving near the speed of light. These explosions are also thought to forge heavy elements, like gold, platinum, and strontium (which gives actual fireworks their stunning reds). Kilonovae shoot those elements across space, potentially allowing them to end up in rocks forming the crust of terrestrial planets like Earth. 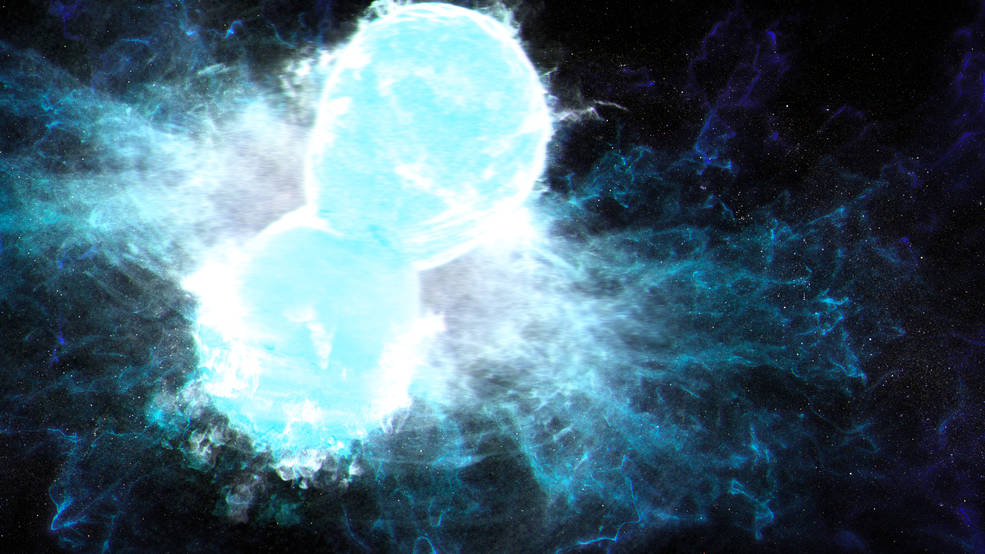 NASA’s Roman Space Telescope will survey the same areas of the sky every few days following its launch in May 2027. Researchers will mine these data to identify kilonovae – explosions that happen when two neutron stars or a neutron star and a black hole collide and merge. When these collisions happen, a fraction of the resulting debris is ejected as jets, which move near the speed of light. The remaining debris produces hot, glowing, neutron-rich clouds that forge heavy elements, like gold and platinum. Roman’s extensive data will help astronomers better identify how often these events occur, how much energy they give off, and how near or far they are.
Credits: NASA, ESA, J. Olmsted (STScI)

The astronomical community captured one of these remarkable kilonova events in 2017. Scientists at the National Science Foundation’s Laser Interferometer Gravitational-Wave Observatory (LIGO) detected the collision of two neutron stars first with gravitational waves – ripples in space-time. Almost simultaneously, NASA’s Fermi Gamma-ray Space Telescope detected high-energy light. NASA quickly pivoted to observe the event with a broader fleet of telescopes, and captured the fading glow of the blast’s expanding debris in a series of images.

But the players in this example collided practically in our “backyard,” at least in astronomical terms. They lie only 130 million light-years away. There must be more kilonovae – and many that are farther flung – dotting our ever-active universe.

“We don’t yet know the rate of these events,” said Daniel M. Scolnic, an assistant professor of physics at Duke University in Durham, North Carolina. Scolnic led a study that estimates the number of kilonovae that could be discovered by past, present, and future observatories including Roman. “Is the single kilonova we identified typical? How bright are these explosions? What types of galaxies do they occur in?” Existing telescopes can’t cover wide enough areas or observe deeply enough to find more distant examples, but that will change with Roman.

At this stage, LIGO leads the pack in identifying neutron star mergers. It can detect gravitational waves in all areas of the sky, but some of the most distant collisions may be too weak to be identified. Roman is set to join LIGO’s search, offering complementary qualities that help “fill out” the team. Roman is a survey telescope that will repeatedly scan the same areas of the sky. Plus, Roman's field of view is 200 times larger than the Hubble Space Telescope’s infrared view – not as vast as LIGO’s, but huge for a telescope that takes images. Its cadence will allow researchers to spot when objects on the sky brighten or dim, whether nearby or very far away.

How will NASA’s Roman Space Telescope detect kilonovae – brief flashes of light sent out by the merger of two neutron stars or a neutron star and a black hole? In part, due to the telescope’s wide field of view. Roman’s view is 200 times larger than the Hubble Space Telescope’s infrared view. Once Roman starts observing the sky at a regular cadence following its launch, planned by 2027, researchers expect to be able to identify more of these spectacular events, both nearby and very far away. Although we do not yet know the rate of these events, when Roman’s data pours in we will begin learn how frequent these mergers are – and what results.
Credits: NASA, Alyssa Pagan (STScI)

Roman will provide researchers a powerful tool for observing extremely distant kilonovae. This is due to the expansion of space. Light that left stars billions of years ago is stretched into longer, redder wavelengths, known as infrared light, over time. Since Roman specializes in capturing near-infrared light, it will detect light from very distant objects. How distant? “Roman will be able to see some kilonovae whose light has traveled about 7 billion years to reach Earth,” explained Eve Chase, a postdoctoral researcher at Los Alamos National Laboratory in Los Alamos, New Mexico. Chase led a more recent study that simulated how differences in kilonovae ejecta can vary what we expect to observe from observatories including Roman.

There’s a second benefit to near-infrared light: It provides more time to observe these short-lived bursts. Shorter wavelengths of light, like ultraviolet and visible, disappear from view in a day or two. Near-infrared light can be gathered for a week or more. Researchers have been simulating the data to see how this will work. “For a subset of simulated kilonovae, Roman would be able to observe some more than two weeks after the neutron star merger occurred,” Chase added. “It will be an excellent tool for looking at kilonovae that are very far away.”

Soon, researchers will know far more about where kilonovae occur, and how often these explosions occur in the history of the universe. Were those that occurred earlier different in some way? “Roman will allow the astronomy community to begin conducting population studies along with a slew of new analyses on the physics of these explosions,” Scolnic said.

A survey telescope offers enormous possibility – and also a ton of data that will require precise machine learning. Astronomers are meeting this challenge by writing code to automate these searches. Ultimately, Roman’s massive data sets will help researchers unravel perhaps the greatest mysteries about kilonovae to date: What happens after two neutron stars collide? Does it produce a single neutron star, a black hole, or something else entirely? With Roman, we will gather the statistics researchers need to make substantial breakthroughs.