Newly proven technology developed at NASA’s Wallops Flight Facility near Chincoteague, Virginia, turns a single sounding rocket into a hive deploying a swarm of up to 16 instruments. The technology offers unprecedented accuracy for monitoring Earth’s atmosphere and solar weather over a wide area.

The Swarm Communications technology, as dubbed by its NASA Wallops creators, spreads sub-payloads up to 25 miles out from the rocket. Each cannister streams its unique telemetry and science data using onboard radios through the host rocket’s communications system to the ground.

“We were lucky enough that we had this core team with the right skill set to get this done,” Scott Hesh said. “We were able to turn this around from concept to flight in under three years.”

Today, after three science-enabling test flights, the system is already booked by mission teams for another four launches through mid-2024.

“We knew from the beginning that we wanted one sub-payload that would be either spring- or rocket-ejected and not have to rely on separate designs for each option,” he said. “Every time we got together, diverse perspectives on the team led to improvements in different systems.”

Sub-payloads deployed with springs can carry larger payloads, but they eject from the rocket at 8 feet per second. This speed allows up to a 0.6-mile radius of separation from the main payload. Adding a small rocket motor limits space inside the cannister but increases their velocity by a factor of 48 for a 15-mile separation. They dubbed their project Swarm Communications, Scott Hesh said, because it communicates with multiple sub-payloads, though individual cannisters do not operate independently as in other NASA swarm initiatives. 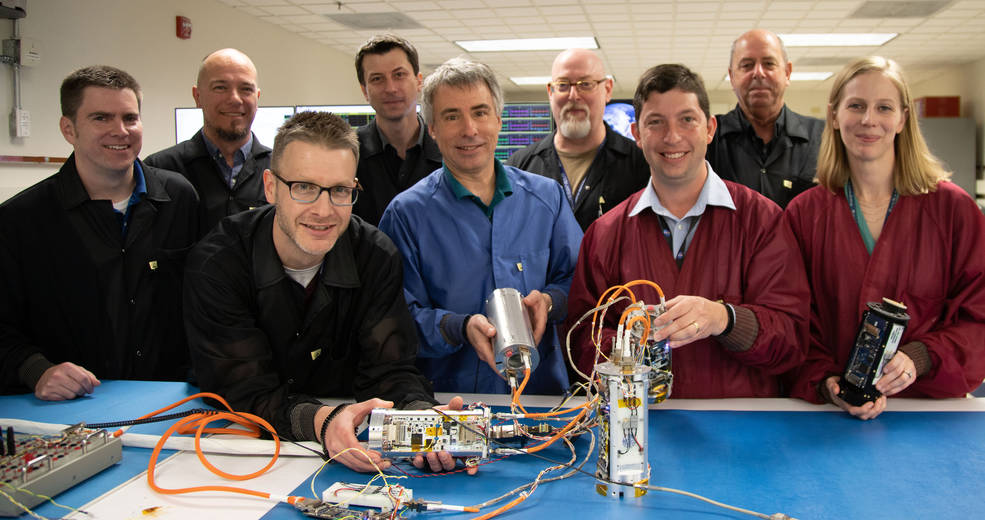 The Swarm Communications team displays their sub-payload cannisters at NASA’s Wallops Flight Facility near Chincoteague, Virginia. In the first row (left to right), Taylor Green, Steve Bundick, and Josh Yacobucci hold three of the four swarm sub-payloads that flew on the first tech demo flight, which proved the swarm technology worked. On the right, Cathy Hesh holds a 3D-printed prototype used to develop the concept prior to building the flight hardware. In the back row (left to right) are Brian Banks, Christian Amey, Scott Hesh, Chris Lewis, and Alex Coleman (now retired). Not pictured are Marta Shelton and Gerald Freeman.
Credits: NASA's Wallops Flight Facility/Berit Bland

Sounding rockets are sub-orbital launches from locations like NASA’s Wallops Flight Facility near Chincoteague, Virginia. They provide an affordable platform to test new space-bound technology and conduct science experiments that cannot be accomplished on the ground. Sounding rockets, along with balloons and aircraft, are part of NASA’s affordable access to space program that brings these opportunities to scientists, educational institutions, and students.

Riding on the third launch this past August, researcher Dr. Aroh Barjatya’s Sporadic-E ElectroDynamics Demonstration mission, or SpEED Demon, traveled up to 100 miles altitude on a Terrier-Improved Malemute rocket. He sought to measure conditions of a transitory Sporadic E event: where a cloud of evaporated micrometeor metals can reflect radio signals at a level in the ionosphere that doesn’t normally reflect radio.

“This was an excellent mission,” Barjatya said. “Preliminary analysis shows that we flew through a Sporadic E event on the down leg and the data looks great. We’ll be looking at the performance of all instruments to get us ready for a 2024 launch.” Barjatya directs the Space and Atmospheric Instrumentation Lab at Embry-Riddle Aeronautical University in Daytona Beach, Florida.

“There has been huge interest in our in our experimenter community to put their sensor packages on this platform,” Scott Hesh said. “It’s really not that hard for them to build these sub-payloads now that we have a platform with standard data interfaces and a standardized power supply. That takes a lot of design effort off them.”

“We can’t build the sub-payloads fast enough to keep our customers happy,” he added. “That’s a good problem to have.”

Working with scientists from the beginning allowed the team to direct their efforts to provide better science results, said Cathy Hesh.

“We ended up taking on several instruments and they got a lot of science data back even on our first test flight,” she said. “We also got good, real-time feedback from the scientists to help improve the whole project.”