NASA's Orion capsule has reached the moon, whipping around the far side and passing within about 80 miles

CAPE CANAVERAL, Fla. -- NASA’s Orion capsule reached the moon Monday, whipping around the far side and buzzing the lunar surface on its way to a record-breaking orbit with test dummies sitting in for astronauts.

It’s the first time a capsule has visited the moon since NASA’s Apollo program 50 years ago, and represents a huge milestone in the $4.1 billion test flight that began last Wednesday.

Video of the looming moon and our pale blue planet more than 230,000 miles (370,000 kilometers) in the distance left workers “giddy" at Houston's Johnson Space Center, home to Mission Control, according to flight director Judd Frieling. Even the flight controllers themselves were “absolutely astounded.”

The close approach of 81 miles (130 kilometers) occurred as the crew capsule and its three wired-up dummies were on the far side of the moon. Because of a half-hour communication blackout, flight controllers in Houston did not know if the critical engine firing went well until the capsule emerged from behind the moon. The capsule's cameras sent back a picture of the Earth — a tiny blue dot surrounded by blackness.

The capsule accelerated well beyond 5,000 mph (8,000 kph) as it regained radio contact, NASA said. Less than an hour later, Orion soared above Tranquility Base, where Neil Armstrong and Buzz Aldrin landed on July 20, 1969. There were no photos of the site because the pass was in darkness, but managers promised to try for pictures on the return flyby in two weeks.

Orion needed to slingshot around the moon to pick up enough speed to enter the sweeping, lopsided lunar orbit. Another engine firing will place the capsule in that orbit Friday.

The capsule will spend close to a week in lunar orbit, before heading home. A Pacific splashdown is planned for Dec. 11.

Orion has no lunar lander; a touchdown won't come until NASA astronauts attempt a lunar landing in 2025 with SpaceX's Starship. Before then, astronauts will strap into Orion for a ride around the moon as early as 2024.

Mission manager Mike Sarafin was delighted with the progress of the mission, giving it a “cautiously optimistic A-plus" so far.

The Space Launch System rocket — the most powerful ever built by NASA — performed exceedingly well in its debut, Sarafin told reporters. He said teams are dealing with two issues that require workarounds — one involving the navigational star trackers, the other the power system,

The 322-foot (98-meter) rocket caused more damage than expected, however, at the Kennedy Space Center launch pad. The force from the 8.8 million pounds (4 million kilograms) of liftoff thrust was so great that it tore off the blast doors of the elevator, leaving it unusable.

Sarafin said the pad damage will be repaired in plenty of time before the next launch.

Artemis powering past the Moon

Today at 13:44 CET (12:44 GMT) the Artemis spacecraft Orion powered its main thruster on the European Service Module to slingshot around the Moon, just five days after liftoff from NASA’s Kennedy Space Center in Florida, USA.

The European Service Module is powering Orion around the Moon and back, providing propulsion, temperature control, electricity as well as storage and delivery for essential supplies such as fuel, water and air. This first Artemis mission is an uncrewed test mission, putting the spacecraft through its paces preparing to send astronauts forward to the Moon.

After liftoff at 07:47 CET (06:47 GMT, 01:47 local time) on 16 November, the European Service Module unfolded its 7-m solar wings to start generating electricity. The Orion spacecraft received a final boost from NASA’s Artemis rocket’s second stage and has been on a five-day cruise to the Moon since. 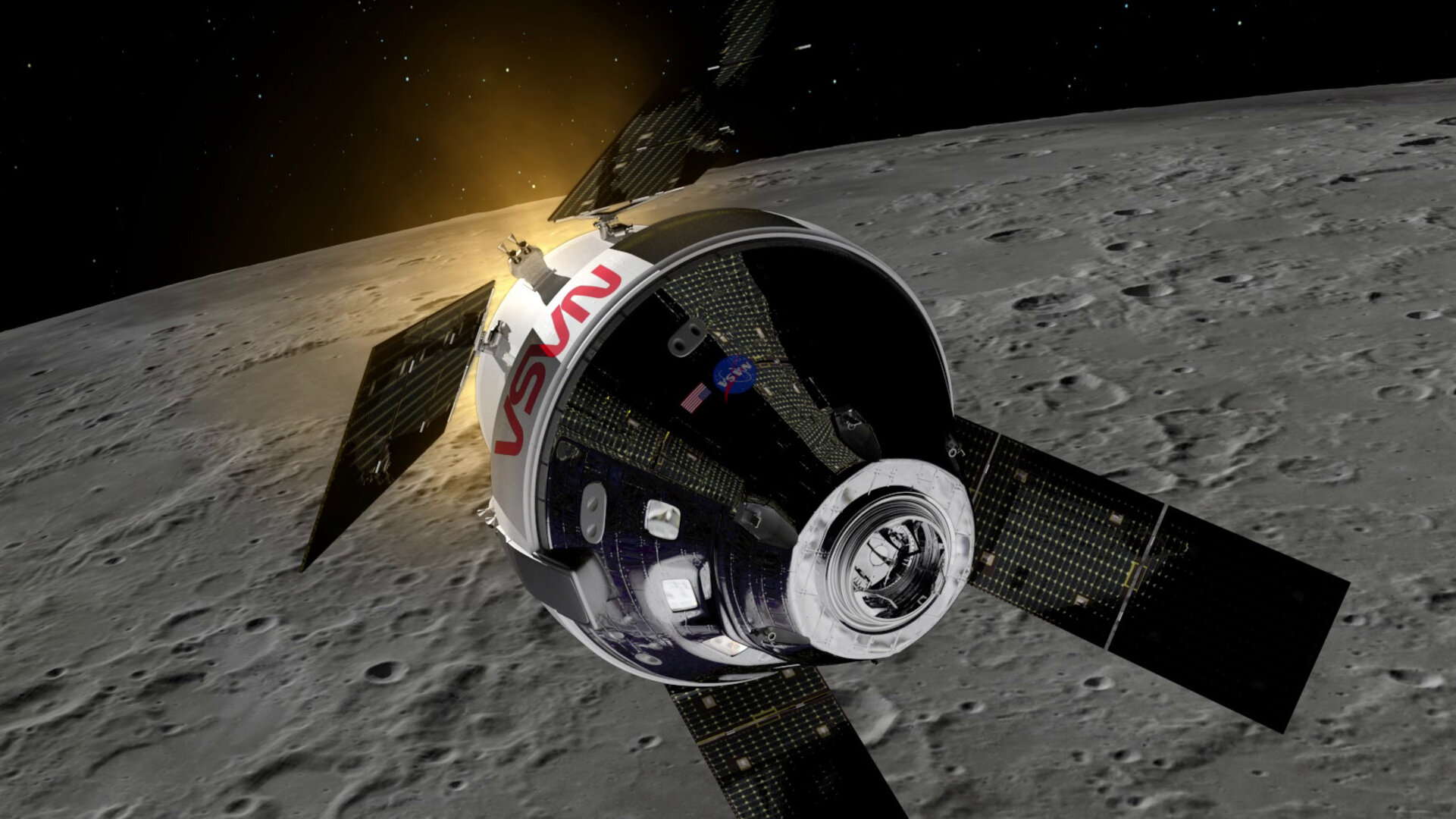 Today was a key moment for the NASA and ESA teams operating Orion, at just a little more than 130 km from the lunar surface the main engine on the European Service Module – a repurposed Space Shuttle engine that is now on 20th spaceflight – fired for just under 150 seconds to push the spacecraft and head towards a lunar orbit using the Moon’s gravity to reduce fuel consumption.

“It has been an absolute joy to follow the mission so far,” says ESA’s Programme Manger for the European Service Modules, Philippe Deloo, “all the thousands of components inside have been working together flawlessly as designed, a testament to the international collaboration and prowess of European and US industry.”

Mission control for Orion is at the Johnson Space Center in Houston, USA, with European engineers on hand at all times to offer in-depth expertise on the finer details of the service module. The mission evaluation room based at ESA’s technical heart in The Netherlands has personnel round the clock in direct communication with mission control.

The goal of the Artemis I mission is to stress-test the mission profile, the spacecraft, and the people operating it in preparation for flights with astronauts.

“Operationally the spacecraft is performing perfectly and the international collaboration with this new spacecraft with new flight rules is great to see,” continues Philippe, “The teams across both sides of the Atlantic are showing exemplary skills, knowledge and teamwork leading humankind forward to the Moon.”

Inside the Orion crew capsule are multiple experiments to prepare for astronaut flights responsibly. These include an ESA investigation recording the radiation doses an astronaut will receive and a German Aerospace Center, DLR, mannequin that is being used to test a radiation vest that astronauts could wear for protection during solar storms.

Orion is now following the Moon’s orbit around Earth and will officially enter lunar orbit on its tenth day of flight, 25 November, when the European Service Module performs the Distant Retrograde Insertion, firing its thrusters to brake Orion and keep flying around the Moon.

The mission is set to end with a splashdown in the Pacific Ocean on 11 December. Visit ESA’s Orion blogfor frequent and more detailed updates. 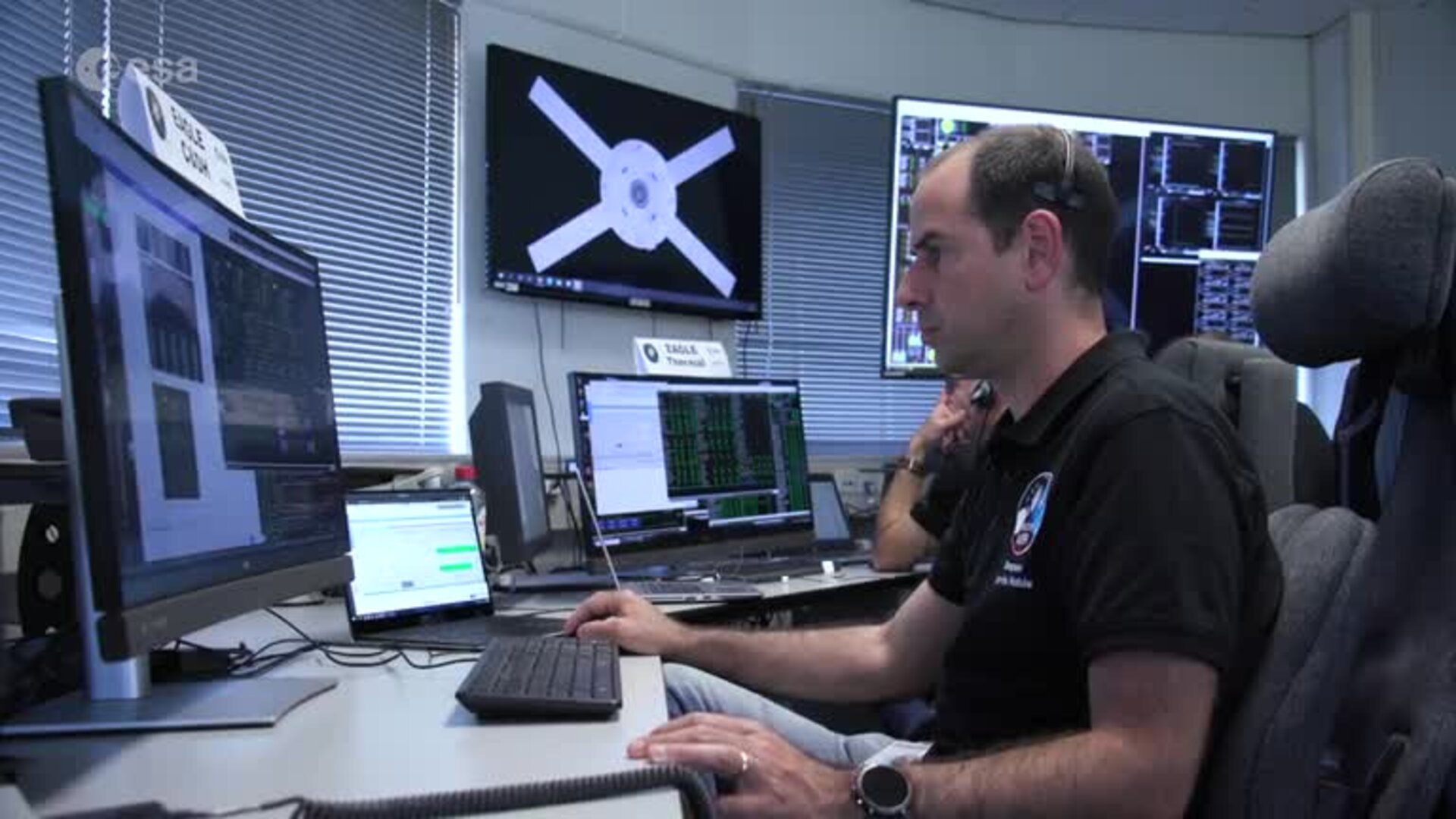 NASA’s Mission Control Center at the agency’s Johnson Space Center in Houston unexpectedly lost data to and from the spacecraft at 12:09 a.m. CST for 47 minutes while reconfiguring the communication link between Orion and Deep Space Network overnight. The reconfiguration has been conducted successfully several times in the last few days, and the team is investigating the cause of the loss of signal. The team resolved the issue with a reconfiguration on the ground side. Engineers are examining data from the event to help determine what happened, and the command and data handling officer will be downlinking data recorded onboard Orion during the outage to include in that assessment. There was no impact to Orion, and the spacecraft remains in a healthy configuration.