NASA’s newest X-ray eyes are open and ready for discovery!

Having spent just over a month in space, the Imaging X-ray Polarimetry Explorer (IXPE) is working and already zeroing in on some of the hottest, most energetic objects in the universe.

A joint effort between NASA and the Italian Space Agency, IXPE is the first space observatory dedicated to studying the polarization of X-rays coming from objects like exploded stars and black holes. Polarization describes how the X-ray light is oriented as it travels through space.

“The start of IXPE’s science observations marks a new chapter for X-ray astronomy,” said Martin Weisskopf, the mission’s principal investigator at NASA’s Marshall Space Flight Center in Huntsville, Alabama. “One thing is certain: we can expect the unexpected.”

IXPE launched Dec. 9 on a Falcon 9 rocket into orbit 370 miles (600 kilometers) above Earth’s equator. The observatory’s boom, which provides the distance needed to focus X-rays onto its detectors, was deployed successfully on Dec. 15. The IXPE team spent the next three weeks checking out the observatory’s maneuvering and pointing abilities and aligning the telescopes.

Over the course of these tests, the team pointed IXPE at two bright calibration targets: 1ES 1959+650, a black-hole-powered galaxy core with jets shooting into space; and SMC X-1, a spinning dead star, or pulsar. The brightness of these two sources made it easy for the IXPE team to see where X-rays are falling on IXPE’s polarization-sensitive detectors and make small adjustments to the telescopes’ alignment.

What’s Next for IXPE?

On Jan. 11, IXPE began observing its first official scientific target – Cassiopeia A, or Cas A – the remains of a massive star that blew itself apart in a supernova around 350 years ago in our own Milky Way galaxy. Supernovae are filled with magnetic energy and accelerate particles to near light-speed, making them laboratories for studying extreme physics in space.

IXPE will provide details about Cas A’s magnetic field structure that can’t be observed in other ways. By studying the X-ray polarization, scientists can work out the detailed structure of its magnetic field and the sites where these particles pick up speed.

IXPE’s observations of Cas A will last about three weeks.

“Measuring X-ray polarization is not easy,” said Weisskopf. “You have to collect a lot of light, and the unpolarized light acts like background noise. It can take a while to detect a polarized signal.”

More about the IXPE Mission

IXPE transmits scientific data several times a day to a ground station operated by the Italian Space Agency in Malindi, Kenya. The data flows from the Malindi station to IXPE’s Mission Operations Center at the University of Colorado Boulder’s Laboratory for Atmospheric and Space Physics (LASP) and then to IXPE’s Science Operations Center at NASA Marshall for processing and analysis. IXPE’s scientific data will be publicly available from the High Energy Astrophysics Science Research Center at the NASA’s Goddard Space Flight Center in Greenbelt, Maryland.

The Marshall science operations team also coordinates with mission operations team at LASP to schedule science observations. The mission plans to observe more than 30 planned targets during its first year. The mission will study distant supermassive black holes with energetic particle jets that light up their host galaxies. IXPE will also probe the twisted space-time around stellar-mass black holes and measure their spin. Other planned targets include different types of neutron stars, such as pulsars and magnetars. The science team has also reserved about a month to observe other interesting objects that may appear in the sky or brighten unexpectedly.

IXPE is a collaboration between NASA and the Italian Space Agency with partners and science collaborators in 12 countries. Ball Aerospace, headquartered in Broomfield, Colorado, manages spacecraft operations.

ite bar, the particles become energized and emit X-rays as they accelerate. Moving away from the shock, they emit lower-energy light: first visible, then infrared, and radio waves. Farther from the shock, the magnetic field lines are more chaotic, causing more turbulence in the particle stream. Pablo Garcia (NASA/MSFC)

Most galaxies are built around humongous black holes. While many of these are comparatively docile, like the one at our Milky Way's center, some are fierce - guzzling surrounding material and unleashing huge and blazingly bright jets of high-energy particles far into space.

The researchers studied an exotic object called a blazar at the center of a large elliptical galaxy named Markarian 501 located about 460 million light years away from Earth in the direction of the constellation Hercules. A light year is the distance light travels in a year, 5.9 trillion miles (9.5 trillion km).

Blazars are a subset of objects called quasars that are powered by supermassive black holes feeding on gas and other material at the center of galaxies and sending two jets of particles in opposite directions into space. Blazars are oriented such that one of their two jets from our vantage point on Earth is heading directly at us.

"Blazars are the most persistently bright objects in the observable universe. They are the most energetic. They have the biggest, scariest black holes. Everything that happens around them is so fascinating," said astronomer Yannis Liodakis of the Finnish Centre for Astronomy with ESO, lead author of the research published in the journal Nature.

Scientists have long sought to understand how the jets launched from blazars become so luminous and the behavior of the particles in them. The jets from this blazar extend to a distance of about a million light years.

Some of the brightest objects in the sky are called blazars. They consist of a supermassive black hole feeding off material swirling around it in a disk, which can create two powerful jets perpendicular to the disk on each side. A blazar is especially bright because one of its powerful jets of high-speed particles points straight at Earth. For decades, scientists have wondered: How do particles in these jets get accelerated to such high energies?

NASA’s Imaging X-Ray Polarimetry Explorer, or IXPE, has helped astronomers get closer to an answer. In a new study in the journal Nature, authored by a large international collaboration, astronomers find that the best explanation for the particle acceleration is a shock wave within the jet.

“This is a 40-year-old mystery that we’ve solved,” said Yannis Liodakis, lead author of the study and astronomer at FINCA, the Finnish Centre for Astronomy with ESO. “We finally had all of the pieces of the puzzle, and the picture they made was clear.” 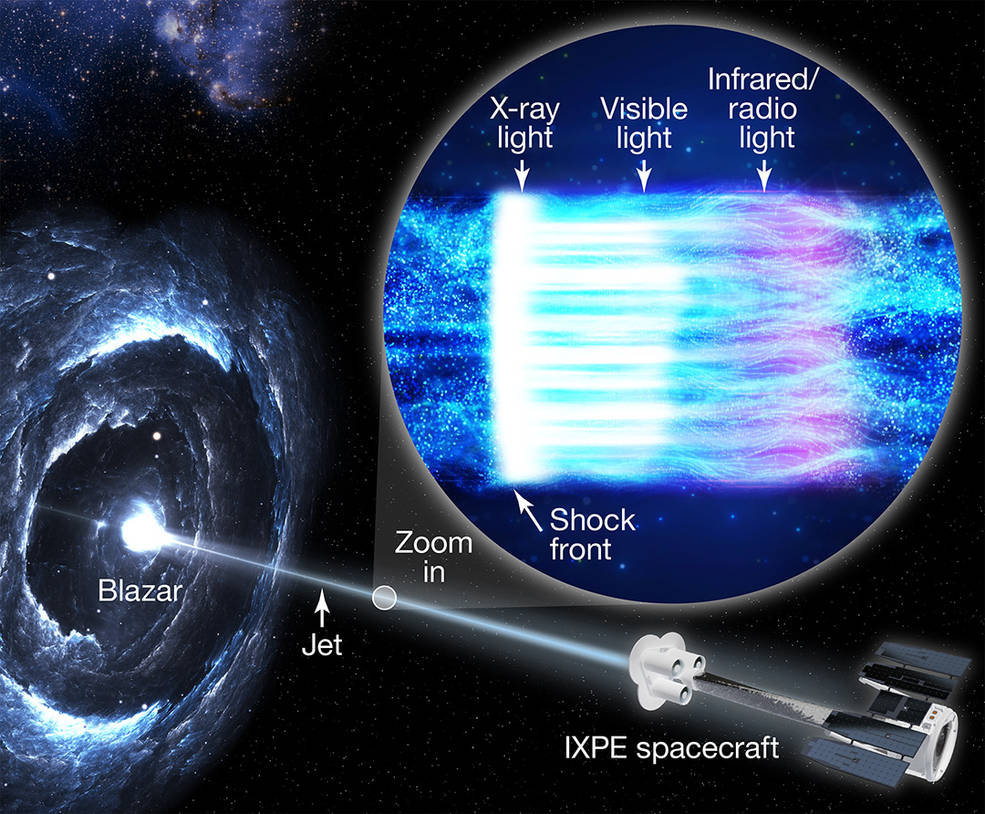 This illustration shows NASA’s IXPE spacecraft, at right, observing blazar Markarian 501, at left. A blazar is a black hole surrounded by a disk of gas and dust with a bright jet of high-energy particles pointed toward Earth. The inset illustration shows high-energy particles in the jet (blue). When the particles hit the shock wave, depicted as a white bar, the particles become energized and emit X-rays as they accelerate. Moving away from the shock, they emit lower-energy light: first visible, then infrared, and radio waves. Farther from the shock, the magnetic field lines are more chaotic, causing more turbulence in the particle stream.
Credits: NASA/Pablo Garcia
Unlabeled version of this image

Launched Dec. 9, 2021, the Earth-orbiting IXPE satellite, a collaboration between NASA and the Italian Space Agency, provides a special kind of data that has never been accessible from space before. This new data includes the measurement of X-ray light’s polarization, meaning IXPE detects the average direction and intensity of the electric field of light waves that make up X-rays. Information about the electric field orientation in X-ray light, and the extent of polarization, is not accessible to telescopes on Earth because the atmosphere absorbs X-rays from space.

“The first X-ray polarization measurements of this class of sources allowed, for the first time, a direct comparison with the models developed from observing other frequencies of light, from radio to very high-energy gamma rays,” said Immacolata Donnarumma, the project scientist for IXPE at the Italian Space Agency. “IXPE will continue to provide new evidence as the current data is analyzed and additional data is acquired in the future.”

The new study used IXPE to point at Markarian 501, a blazar in the constellation Hercules. This active black hole system sits at the center of a large elliptical galaxy.

IXPE watched Markarian 501 for three days in early March of 2022, and then again two weeks later. During these observations, astronomers used other telescopes in space and on the ground to gather information about the blazar in a wide range of wavelengths of light including radio, optical, and X-ray. While other studies have looked at the polarization of lower-energy light from blazars in the past, this was the first time scientists could get this perspective on a blazar’s X-rays, which are emitted closer to the source of particle acceleration.

“Adding X-ray polarization to our arsenal of radio, infrared, and optical polarization is a game changer,” said Alan Marscher, an astronomer at Boston University who leads the group studying giant black holes with IXPE.

After comparing their information with theoretical models, the team of astronomers realized that the data most closely matched a scenario in which a shock wave accelerates the jet particles. A shock wave is generated when something moves faster than the speed of sound of the surrounding material, such as when a supersonic jet flies by in our Earth’s atmosphere.

The study was not designed to investigate the origins of shock waves, which are still mysterious. But scientists hypothesize that a disturbance in the flow of the jet causes a section of it to become supersonic. This could result from high-energy particle collisions within the jet, or from abrupt pressure changes at the jet boundary.

“As the shock wave crosses the region, the magnetic field gets stronger, and energy of particles gets higher,” Marscher said. “The energy comes from the motion energy of the material making the shock wave.”

As particles travel outward, they emit X-rays first because they are extremely energetic. Moving farther outward, through the turbulent region farther from the location of the shock, they start to lose energy, which causes them to emit less-energetic light like optical and then radio waves. This is analogous to how the flow of water becomes more turbulent after it encounters a waterfall – but here, magnetic fields create this turbulence.

Scientists will continue observing the Markarian 501 blazar to see if the polarization changes over time. IXPE will also investigate a broader collection of blazars during its two-year prime mission, exploring more longstanding mysteries about the universe. “It’s part of humanity’s progress toward understanding nature and all of its exoticness,” Marscher said.