Continued operation in RF environments — whether that's GPS denial or communications disruption — is the number one need for tactical unmanned aerial systems.

In the current adversarial environment, unmanned aerial systems need to do more and be better. They must operate effectively even when the enemy tries to disrupt GPS or deny communications capabilities. And because they cannot always communicate with an operator, they need autonomy — onboard artificial intelligence that takes the burden off the operator and speeds results for the warfighter.

AeroVironment is tackling these challenges and in this Q&A with Chief Technology Officer Scott Newbern and Senior Program Director of Autonomy Andrew Browning, we discuss evolving capabilities in the UAS arena.

Breaking Defense: Tell us about the need to make UAVs more survivable.

Newbern: If we think about the electronic warfare (EW) problem and GPS-degraded environments, it’s about providing a mission capability even in the presence of those adversarial capabilities.

In the counterinsurgency fight, a warfighter on the ground would be looking at live video, searching for targets on the ground using GPS guidance and a full-motion video stream coming from the aircraft. In a contested environment against a near-peer competitor, you need to be able to provide that same kind of mission capability — even in the presence of GPS jamming or communications jamming.

Browning: We recently released an alternate navigation system called Puma Visual Navigation System. It’s a payload that can be added to most of the deployed Pumas out there as a retrofit. That is going to allow all our Puma aircraft to continue operating without GPS, day or night, but still use waypoint navigation.

Newbern: Most of our technology tends to be aircraft-oriented, and assured PNT systems that do not use global satellite navigation are not necessarily new. However, deploying it in such a low size, weight, and power-constrained system is the leap ahead that we’re talking about.

Breaking Defense: Are you getting Assured PNT capability from another vendor, or do you develop that yourself?

Browning: We started from the ground up, including the algorithms as well as the payload design. The primary driver for our in-house development was the need for night operations. A lot of the third parties at the time were producing day-only solutions. We designed our solution to function with very low SWaP (size, weight, and power), day or night.

Breaking Defense: Let’s shift to autonomy: What does it mean to be “autonomous” in a contested environment?

Browning: In the context we’re talking about, autonomy is taking something from being a tool that someone uses, to being an asset that provides valuable information to them, without them having to do very much at all.

An autonomous UAS that’s valuable is one that is out there getting the information that the people on the ground need, at the time they need it, and delivering it to them in a way that doesn’t require them to go out of their normal mode of operations to receive that information.

In most of our aircraft or UAS, autonomy will enable the system to go find the things that you care about in the environment and tell you where they are. With our kinetic products it will do that, and then ask you if you want to do something about it.

Breaking Defense: We’re witnessing the practical impact of all this, with the U.S. sending your Puma and Switchblade UAS to Ukraine. What are you seeing there?

Newbern: The Ukrainian experience shows the utility of UAVs in general. It’s a new validation of this kind of capability in its military utility in an environment that hasn’t really been tested in real operation.

It’s striking to see that the UAS value proposition still exists. It still works in these environments, and it’s one of the most valuable tools that the Ukrainian forces have.

Browning: We’re getting a lot of valuable data from the Ukraine conflict that speaks to requirements for our system, as well as the parts of our systems that operate well. We’re ingesting and folding that information into our products. 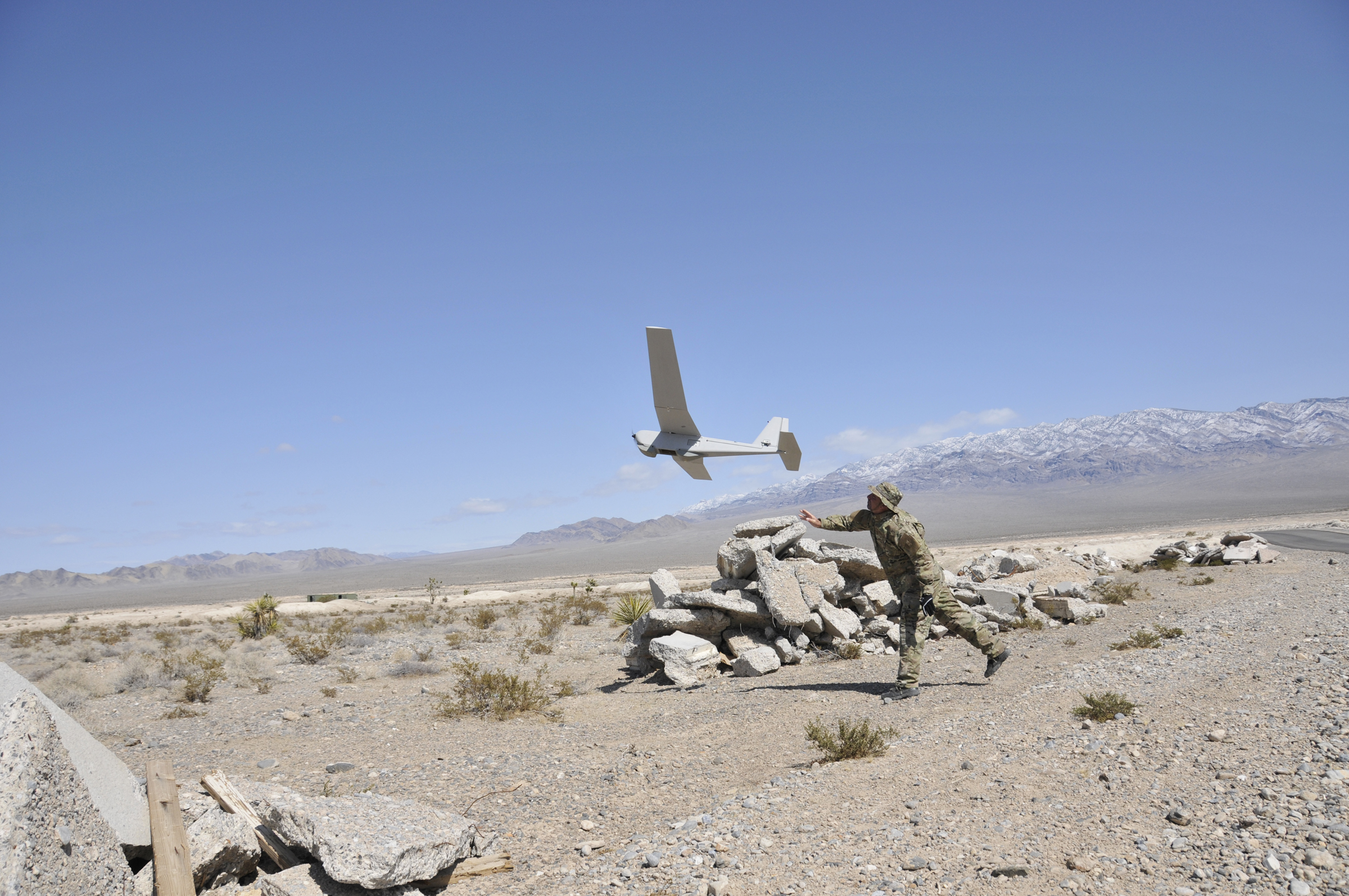 The Puma Visual Navigation System is a leap ahead in such a low size, weight, and power-constrained system. Photo courtesy of AeroVironment.

Breaking Defense: Let’s look at some of those operational enhancements. For example, you’re working on a sensor-to-shooter comms bridge from Puma to a Switchblade operator. Tell us about that?

Newbern: Since early in our development of small UAS, we’ve always had a means of sharing targeting information. The new announcement is a more direct methodology where you maintain positive ID on a target and electronically hand off that target information with basically an operator button push, versus what before might have been a little more work setting up the communications, ensuring the accuracy of target information, and manually verifying the target handoff.

Browning: We’re always looking for ways to refine the way our platforms work together and automate how data flows between them. Sensor-to-shooter is a good example of how we’ve used automation to improve operator workflows.

It’s also a priority for us to understand the mission set that our operators and our customers need to solve, and produce products that allow them to do that faster, easier, safer, and cheaper. Autonomy extends that further, usually in the form of better information that is more reliable, more robust, and more resilient across the full set of environments that our operators work in.

Breaking Defense: Let’s discuss AeroVironment’s acquisitions over the last couple years and what they mean to the warfighter? Let’s start with the ground robotic solutions company Telerob.

Newbern: Our future-state vision is to have this portfolio of intelligent multi-domain robotic solutions that provide mission capabilities. Our UGVs help to increase our presence in a ground environment. There are a number of opportunities there for both military and commercial operations, and it’s about expanding our portfolio into the ground domain.

Breaking Defense: This past summer, your JUMP 20 was selected by the Army for Future Tactical Unmanned Aircraft System (FTUAS) Increment 1. Talk us through that?

Newbern: As a stepping stone on the path to full deployment, Increment 1 is a procurement of our MUAS JUMP 20 platform that will be deployed to select Brigade Combat Teams. It leads to the future of the FTUAS program, the Army’s roadmap to deploy the next generation of tactical UAS. It rolls up into the Army’s Future Vertical Lift program. We’re highly aligned with their roadmap to make Future Vertical Lift a success.

Newbern: Planck Aerosystems was a small startup company that we’ve done quite a bit of work with over the past two or three years. We thought their capabilities were intriguing and valuable enough that we wanted to bring them on as part of our team.

Quite a bit of what they bring to the table is GPS-degraded navigation, in particular, for launch and landing of vertical takeoff and landing systems, as well as a suite of autonomy capabilities that we have added to our portfolio.

Browning: In the last 18 months we also acquired a machine learning group. They were a subgroup of the company Progeny, called the Progeny Intelligence Systems Group. We brought that group into AV as LEAP, the Learning and Active Perception group. LEAP is a team of highly accomplished engineers in the AI /machine learning space that provides relevant solutions across the whole of US DOD. They’re becoming a core part of how we think about object detection, tracking, target identification, and target verification — trying to pull that into our solutions.

Newbern: We’re at the forefront of these capabilities, integrating robotic systems that are mission-oriented, driving autonomy for our user community. We are deploying advanced autonomous capabilities and they continue to build on our robust mission capabilities. We’re making it happen.

Browning: Because we’re at the forefront of deploying operationally relevant autonomous capabilities, we’re experiencing all of the challenges that current environments push on our customers, and on the warfighter in general. We’re seeing that up close, and that drives us to produce autonomy and machine learning solutions that solve the real problems. We’re looking to produce an autonomous system that will help the warfighter do their job better, faster, safer.

Continued operation in RF environments — whether that’s GPS denial or communications disruption — is the number one requirement across the board. It’s all about the ability of our systems to collect and distribute information across military networked systems in contested environments.