Scientists from the International Centre for Radio Astronomy Research (ICRAR) and The University of Western Australia (UWA) have set a world record for the most stable transmission of a laser signal through the atmosphere.

In a study published today in the journal Nature Communications, Australian researchers teamed up with researchers from the French National Centre for Space Studies (CNES) and the French metrology lab Systèmes de Référence Temps-Espace (SYRTE) at Paris Observatory. 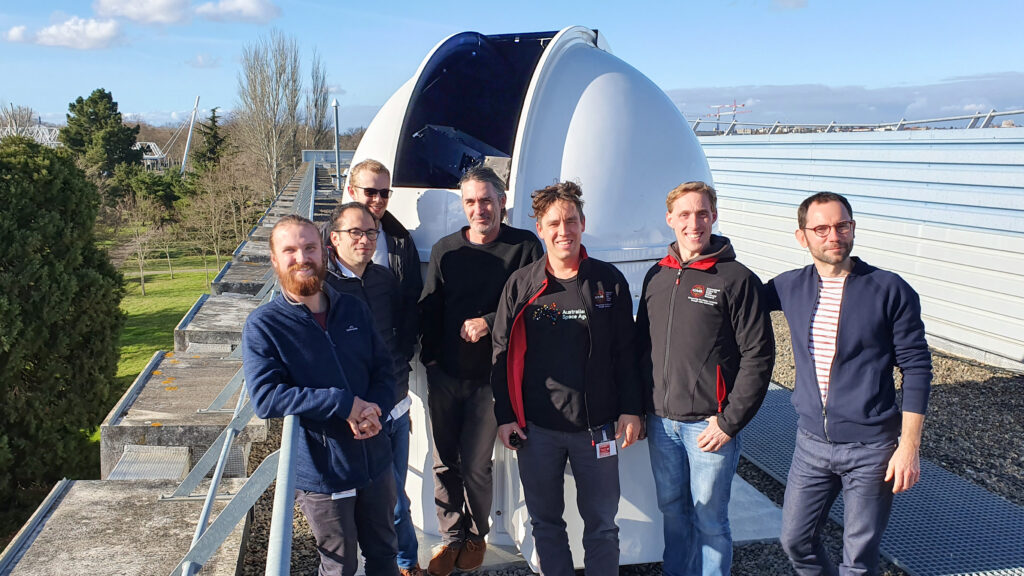 Members of the project team standing in front of a telescope dome located at the CNES campus in Toulouse, containing one of the self-guiding optical terminals. Credit: ICRAR/UWA.

The team set the world record for the most stable laser transmission by combining the Aussies’ ‘phase stabilisation’ technology with advanced self-guiding optical terminals.

Together, these technologies allowed laser signals to be sent from one point to another without interference from the atmosphere.

“We can correct for atmospheric turbulence in 3D, that is, left-right, up-down and, critically, along the line of flight,” he said.

“It’s as if the moving atmosphere has been removed and doesn’t exist.

“It allows us to send highly-stable laser signals through the atmosphere while retaining the quality of the original signal.”

The result is the world’s most precise method for comparing the flow of time between two separate locations using a laser system transmitted through the atmosphere. 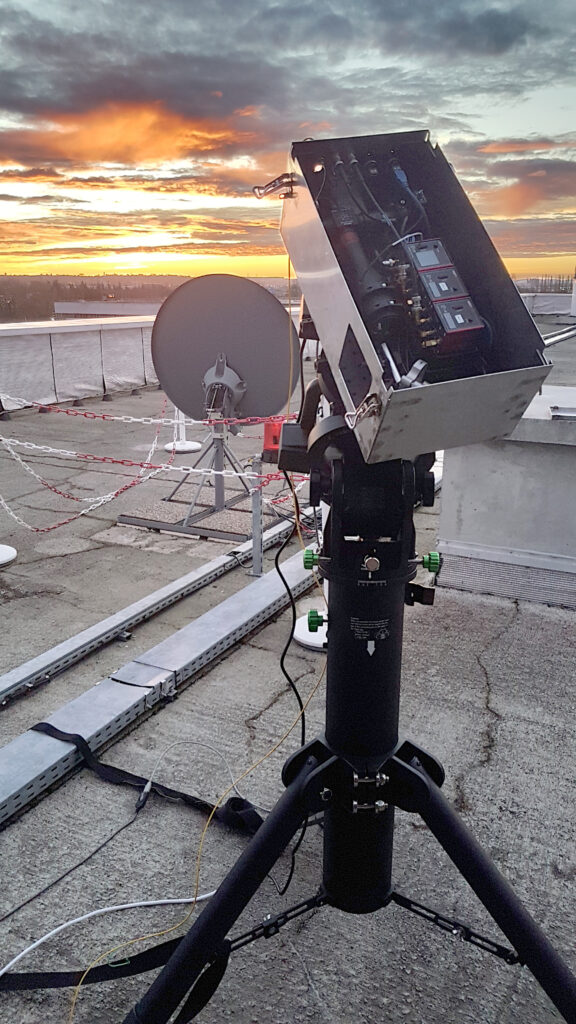 One of the self-guiding optical terminals on its telescope mount on the roof of a building at the CNES campus in Toulouse. Credit: ICRAR/UWA 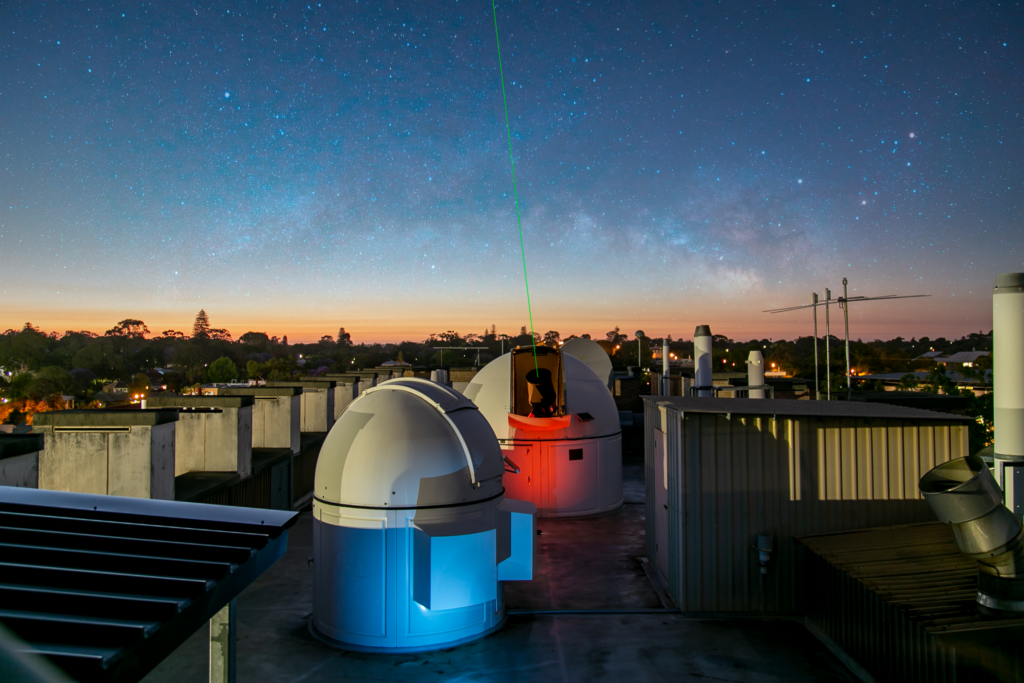 “If you have one of these optical terminals on the ground and another on a satellite in space, then you can start to explore fundamental physics,” he said.

“Everything from testing Einstein’s theory of general relativity more precisely than ever before, to discovering if fundamental physical constants change over time.”

The technology’s precise measurements also have practical uses in earth science and geophysics.

“For instance, this technology could improve satellite-based studies of how the water table changes over time, or to look for ore deposits underground,” Dr Schediwy said.

There are further potential benefits for optical communications, an emerging field that uses light to carry information. 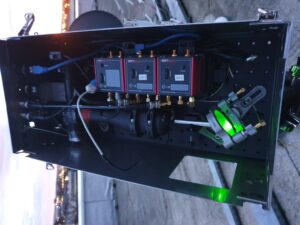 A close-up of one of a self-guiding optical terminal showing the fibre-to-free-space telescope, active optics tip-tilt mirror, and feedback electronics. Credit: ICRAR/UWA.

Optical communications can securely transmit data between satellites and Earth with much higher data rates than current radio communications.

“Our technology could help us increase the data rate from satellites to ground by orders of magnitude,” Dr Schediwy said.

“The next generation of big data-gathering satellites would be able to get critical information to the ground faster.”

The phase stabilisation technology behind the record-breaking link was originally developed to synchronise incoming signals for the Square Kilometre Array telescopes.

The multi-billion-dollar telescopes are set to be built in Western Australia and South Africa. 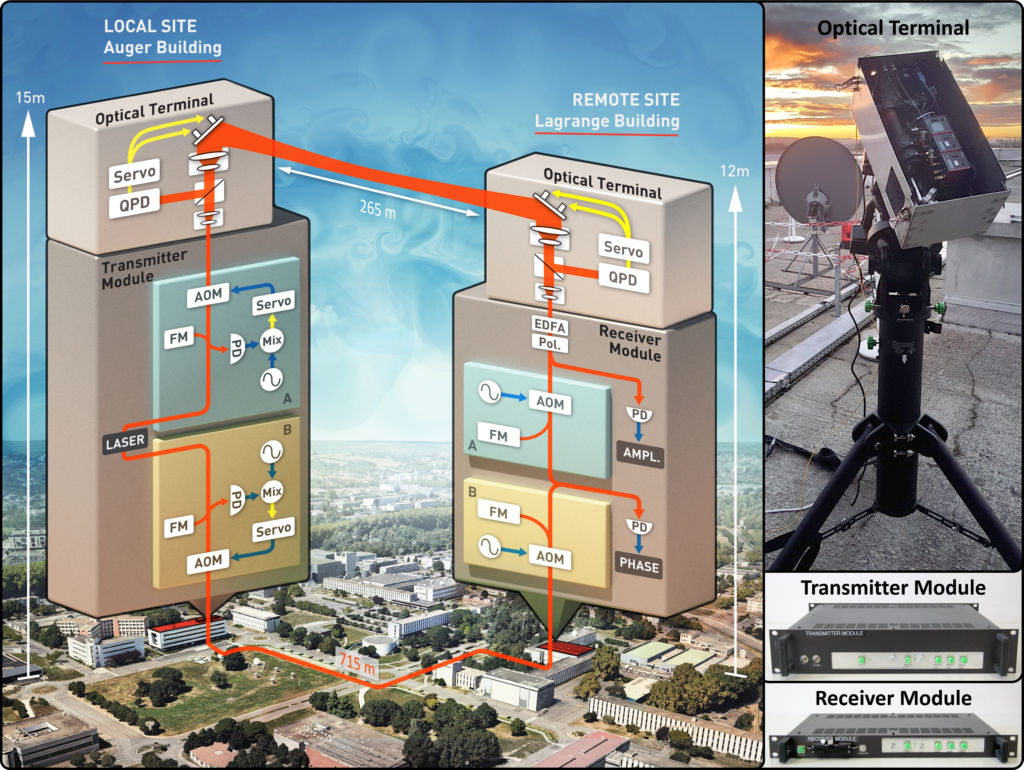 A schematic view of our point-to-point atmospheric-stabilised optical link between two buildings at the CNES campus in Toulouse. Right; one of the self-guiding optical terminals on its telescope mount, and the phase-stabilisation Transmitter Module and Receiver Module. Credit: ICRAR/UWA

The Centre national d’études spatiales (CNES) (English: National Centre for Space Studies) is the French space agency. Established in 1961, its headquarters are located in central Paris and under the supervision of the French Ministries of Defence and Research. It operates out of the Toulouse Space Center and Guiana Space Centre but also has payloads launched from space centres operated by other countries.

The SYRTE (SYstèmes de Référence Temps Espace) is a department of the Paris Observatory, performing the role of France’s national metrology institute. Combining high-level research and scientific services, SYRTE is at the forefront of various disciplinary fields including time and frequency metrology and celestial reference systems.