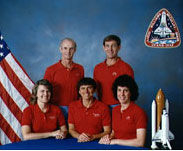 NASA policy in the early 1980's was to launch all spacecraft from the shuttle, unlike earlier, expendable-rocket-launched interplanetary missions such as Voyager (which visited Jupiter, Saturn, Uranus and Neptune).

Initially, it seemed as though Galileo's launch was fated to be delayed. Worries over whether Hurricane Hugo would come onshore at the Kennedy Space Center mounted until, at the last moment, the destructive force of the storm swept north of the launch site, allowing engineers to relax. Then, the day before the rescheduled launch, a 7.1 earthquake, centered just 25 kilometers (15 miles) south of Sunnyvale, California, caused evacuation of the Inertial Upper Stage control center there, which was crucial to mission operations. The control center crew recovered as the night progressed, allowing the countdown to continue.

It wasn't a trivial matter to get Atlantis and its launch vehicle-2,056,277 kilograms (4,523,810 pounds) at launch-into orbit. Each of the three main engines in tail of the shuttle can provide almost a half-million pounds of thrust. The thrust to weight ratio for these engines (about 70:1) is the best in the world-each engine weighs less than 3,200 kilograms (7,000 pounds) but puts out the power equivalent of seven Hoover Dams! The shuttle experiences a maximum of 3 g's of gravity (that is, three times the gravitational force that we feel here on Earth) during ascent; due to vibration, loads on parts of the spacecraft may exceed 10 g's.

Since the shuttle needs to have a daylight landing opportunity at the trans-Atlantic landing abort sites, and since there are performance constraints on Galileo's inertial upper stage, spacecraft liftoff could only occur during certain periods of time. The launch opportunity opened on Oct. 12, 1989 for a 10-minute period. The launch window then grew each day, reaching a maximum of 47 minutes on Nov. 2. The window then decreased each day through the remainder of the launch opportunity, which ended on November 21, 1995.

To get to Jupiter, Galileo had to be inserted into its interplanetary trajectory at the correct time so that, when it arrives at Jupiter's orbit, Jupiter is right there (and not, say, half an orbit away!). This task might be compared to throwing a water balloon at someone running in front of you. You have to lead the aim point by just the right amount to hit the target; if you aim at where the person is right when you throw the balloon, you'll end up missing the target. If an interplanetary spacecraft misses its launch opportunity, we have to wait for the orbital motion of the planets to realign them into the "correct" geometry for a successful launch opportunity.

Because Galileo used a VEEGA (for Venus-Earth-Earth Gravity Assist) trajectory to fly to Jupiter (rather than a direct trajectory), its launch opportunities did not repeat at regular intervals the way direct trajectories do. This is because there are many ways to combine a launch from Earth with one Venus and two Earth flybys to get to Jupiter. The next three VEEGA opportunities to Jupiter after the one Galileo used occurred in November 1989 and May/June 1991. There were actually two different opportunities in the May/June 1991 time period.

Space Shuttle Atlantis lifted off from Launch Pad 39B at NASA's Kennedy Space Center in Florida at 12:53 p.m. EDT, Oct. 18, 1989 on the STS-34 mission.
Atlantis carried a crew of five and the spacecraft Galileo which was deployed on a six-year voyage to Jupiter.

Mission Specialist Shannon Lucid started Galileo's deployment by pushing a button; automatic systems then took over to separate Galileo from the shuttle. As deployment finished Commander Donald E. Williams declared "Galileo is on its way to another world. It's in the hands of the best flight controllers in this world-fly safely."

Beginning an hour after deployment, two rocket stages of Galileo's IUS booster fired one after the other. Galileo separated from the IUS's second stage at 9:05 p.m. and began its ballistic (or "freefall") flight to Venus for the first of three gravity assisted flybys, which would take Galileo to Jupiter.

Galileo was the second spacecraft to be launched using the IUS ( Magellan, the Venus radar mapping mission, was the first. Interestingly, even though Magellan was launched first (in April of 1989), Galileo reached Venus first.). Built by Boeing for the Air Force, the IUS, which uses solid (as opposed to liquid) fuel, gave Galileo an additional speed of 4.0 kilometers per second (8,640 miles per hour).