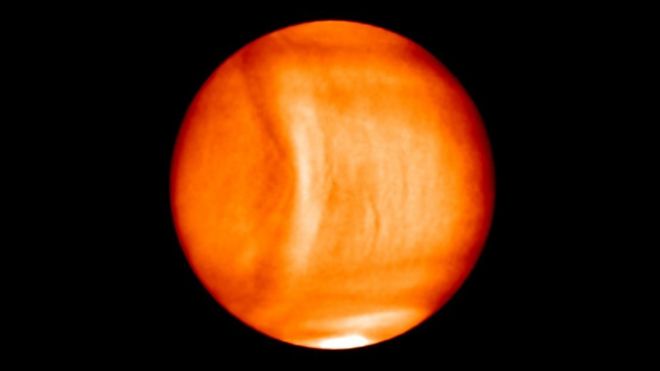 A giant wave in the atmosphere of Venus may be the biggest of its kind in the Solar System.

The feature, observed by a Japanese spacecraft, is thought to be generated in a broadly similar way to the surface ripples that form as water flows over rocks on a stream bed.

In this case, the wave is thought to form as the lower atmosphere flows over mountains on Venus' surface.

The findings are published in Nature Geoscience journal.

Just after entering orbit around Venus in 2015, the Akatsuki spacecraft observed a bow-shaped feature in the upper atmosphere over several days.

Curiously, the bright structure - which stretched for 10,000km - remained stationary at the altitude of Venus' cloud tops. This is difficult to reconcile with what we know about Venus' thick upper atmosphere, in which clouds streak by at 100 metres per second (m/s).

The clouds travel much faster than the slowly rotating planet below, where a Venusian day lasts longer than it takes for the planet to orbit the Sun.

Makoto Taguchi from Rikkyo University in Tokyo, Atsushi Yamazaki from the Japan Aerospace Exploration Agency (Jaxa) and others show that the bright region was fixed over a mountainous region of the surface known as Aphrodite Terra. It was also found to be hotter than surrounding parts of the atmosphere.

The researchers propose that the phenomenon is the result of a gravity wave that is generated as the lower atmosphere passes over mountains and then propagates upwards through Venus' thick atmosphere. Gravity waves ensue when a fluid - such as a liquid, gas or plasma - is displaced from a position of equilibrium.

Dr Colin Wilson, a planetary scientist from the University of Oxford, who was not involved in the study, explained: "If you have a stream and it's flowing over a rock, you get the gravity waves propagating upwards through the water. At the surface of the stream, you will see it as changes in height.

On this point Dr Wilson told BBC News: "I think we should give them that... it stretches almost from pole to pole, which is phenomenal in distance.

He added: "The thing is you can't have a feature like that on Jupiter because the planet's fast rotation means (the atmosphere) is broken up into belts. Venus' slow rotation lets you have a whole feature like this."

It has been unclear whether gravity waves generated by mountainous topography can travel upwards to the Venusian cloud tops. But the observations suggest that atmospheric dynamics may be more complex at depth than some scientists had supposed.

Dr Wilson was involved with the European Space Agency's Venus Express mission, which ended in December 2014. Toward the end of the mission, the spacecraft detected tantalising potential evidence for present-day volcanism on Earth's neighbour.

"[The Venus Express team] only saw that in one location on Venus. The fact that Akatsuki is there for another couple of years equipped with the right sort of cameras, they could detect more of these potential active volcanic events," Dr Wilson told BBC News.