Scientists at BAE Systems are researching future technology which would enable aircraft to use lasers to create ‘virtual lenses’ in the sky which could be used for long-distance reconnaissance and for deflecting attacks from high-energy laser beams. However, the potential uses for the system are not limited to defence, as BILL READ FRAeS reports

Scientists at BAE Systems are working on research to develop a military airborne system which could be used to greatly increase over the horizon surveillance range and to deflect enemy laser attacks. Called the Laser Developed Atmospheric Lens (LDAL) concept, the system has been developed by technologists at the BAE’s military aircraft facility in Warton, Lancashire. The system works by simulating naturally occurring phenomena and temporarily - and reversibly - changing the Earth’s atmosphere into a lens-like structures to magnify or change the path of electromagnetic waves such as light and radio signals. The concept is based on known science and has been evaluated by the Science and Technology Facilities Council (STFC) Rutherford Appleton Laboratory as well as specialist optical sensors company LumOptica.

According to BAE, LDAL copies two existing effects in nature; desert mirages and the reflective properties of the ionosphere. Both processes rely on the principle of refraction, in which electromagnetic waves can change direction depending on the medium they're passing through. Mirages, which give the illusion of a distant lake in the hot desert, are caused by atmospheric refraction, as hot air near the ground bends light from the sky to make it appear as if the sky is shimmering on the ground. The refraction of light waves can be observed when a straw appears to be bent in a glass of water but also affect ground-based space telescopes which have to look through random bubbles and layers of hot air which can refract light.

Refraction can also occur in the ionosphere, a naturally occurring very high altitude layer of the Earth’s atmosphere. The ionosphere can be reflective to radio waves which can result in the ‘skywave’ phenomenon in which AM radio signals can bounce off the ionosphere and travel very long distances, allowing listeners to tune in to radio stations thousands of miles away.

I can see clearly now

A still from a BAE concept video showing the atmospheric lens being created. (BAE Systems)

LDAL utilises both of these effects by using a high pulsed power laser system to temporarily ionise or heat a bubble of air in a controlled way (known in physics as the ‘Kerr Effect’). The effect would be to create a virtual lens, mirror or Fresnel zone plates (a device that uses diffraction to focus light) which would have the same properties of refraction, reflection and diffraction as one built from solid materials, except that it could be much larger.

The enemy installation is now visible through the giant aerial lens. (BAE Systems)

BAE has produced a video https://www.youtube.com/watch?v=j0JR_L_VY8Y showing how the system could be utilised. Military commanders of the future would be able to use a LDAR mounted aboard a flying military platform to create a giant lens of air which it could use to enhance its own onboard optics to see over much greater distances than the range of current sensors. The virtual lens would then disappear as the atmosphere returns to normal temperature.

The lens is used as a defensive shield to counter a ground-based laser attack. (BAE Systems)

The onboard laser could also be used to create a ‘deflector shield by changing the properties of the heated atmospheric bubble to alter its shape so that, instead of focusing light to form a lens, it would scatter light randomly making it impossible for an enemy to focus a high-powered laser beam onto the aircraft (the BAE video shows an offensive laser beam being reflected back and destroying an enemy ground-based directed energy weapon). Many military platforms are already fitted with laser detection systems, so the LDAR could quickly switch from reconnaissance to defensive mode. According to BAE, LDAR could also be used to protect friendly aircraft, ships, land vehicles and troops.

Fifty years from now, it may be easier to fit lasers on board aircraft. (BAE Systems)

BAE admits that the technology may not be fully mature for up to 50 years, as the idea has not yet got beyond the concept stage - although it has been reported that the company has ten patents pending for the technology. There are many problems still to be overcome with the LDAL system, not the least of which is how to control the shape and size of area of heated air so that it functions as a lens. If the system is mounted on an aircraft, the laser beam would fire regular bursts of energy, creating a lens in front of or behind the aircraft that moves along with it. This could be difficult to precisely control as, not only will the aircraft be moving but it will also be encountering a range of different conditions as it flies.

Currently, the development of high energy lasers (HEL) aboard aircraft is being constrained by their large size, the high power levels needed to operate them and the weight and size of generating equipment - see https://www.aerosociety.com/news/light-sabre-rattling/). However, according to BAE, LDAL will not need to be operated continuously but in short continuous bursts which may reduce the power levels needed. 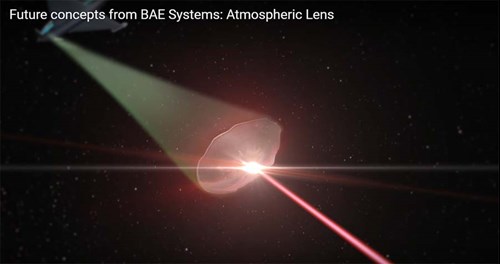 The effect of an airborne laser can also be degraded by poor atmospheric conditions and any unsteadiness from the aerial platform (such as from turbulence). It could be that LDAL may experience problems in creating and maintaining the shape of its mobile lens in anything less than perfect weather conditions, although the system is designed to focus light, so this may not be a problem. There is also the issue of what happens if the enemy has a LDAL system too which could be used to degrade the shape of the giant air lens or deflect the airborne laser. What would happen if two LDALs fought each other is anyone’s guess.

However, the system does offer some fascinating possibilities, not all of which are restricted to military applications. As well as being used for long-distance reconnaissance (perhaps as an alternative to orbiting spy satellites if these have been disabled in a war situation), it may be possible to confuse the enemy by creating mirages of false targets. As well as light, the system could refract other waves on the electromagnetic spectrum, such as radio waves. This could mean that reconnaissance platforms could collect enemy radio emissions from far greater distances than is presently possible. It also might be feasible that a LDAL system might be able to deny enemy optical or radar surveillance from space, for example, by 'blurring' or diverting SAR satellite imagery over key installations, forces or regions.

Many countries are already working on military DEWs designed to down aerial targets. (BAE Systems)

The ability of LDAL to create a defensive shield could also be useful as more countries add laser weapons to their military arsenals. Many military vehicles, such as armoured vehicles, ships and aircraft are already equipped with laser warning receivers that detect and locate the direction of laser emissions, so an additional defensive laser would not be too difficult to add.

However, some of the most interesting applications for a LDAL system are not just for the military but for the space industry. It has already been mentioned that Earth-based telescopes are affected by changes in the atmosphere, a LDAL system which enable a radio telescope to pick up signals more clearly. There are also proposals for space telescopes which could use lasers to create a virtual receiving dish to pick up signals from further out in space - although where the atmosphere to create these in space would come from is not certain.

Another possibility presented by LDAL is the creation of giant aerial lenses which could focus the power of the Sun onto a particular section of the Earth - which could be used for solar power generation or - rather less positively - as a potential weapon.

Watch the skies - they may soon be watching you …