Even before its launch, NASA’s Lucy mission was already on track to break records by visiting more asteroids than any previous mission. Now, after a surprise result from a long-running observation campaign, the mission can add one more asteroid to the list.

On March 27, Lucy’s science team discovered that the smallest of the mission’s Trojan asteroid targets, Polymele, has a satellite of its own. On that day, Polymele was expected to pass in front of a star, allowing the team to observe the star blink out as the asteroid briefly blocked, or occulted, it. By spreading 26 teams of professional and amateur astronomers across the path where the occultation would be visible, the Lucy team planned to measure the location, size, and shape of Polymele with unprecedented precision while it was outlined by the star behind it. These occultation campaigns have been enormously successful in the past, providing valuable information to the missionon its asteroid targets, but this day would hold a special bonus.

We were thrilled that 14 teams reported observing the star blink out as it passed behind the asteroid, but as we analyzed the data, we saw that two of the observations were not like the others,” said Marc Buie, Lucy occultation science lead at the Southwest Research Institute, which is headquartered in San Antonio. “Those two observers detected an object around 200 km (about 124 miles) away from Polymele. It had to be a satellite.” 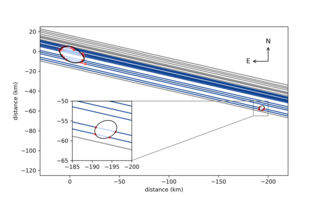 Using the occultation data, the team assessed that this satellite is roughly 3 miles (5 km) in diameter, orbiting Polymele, which is itself around 17 miles (27 km) along its widest axis. The observed distance between the two bodies was about 125 miles (200 km).
Credits: NASA's Goddard Space Flight Center

Using the occultation data, the team assessed that this satellite is roughly 3 miles (5 km) in diameter, orbiting Polymele, which is itself around 17 miles (27 km) along its widest axis. The observed distance between the two bodies was about 125 miles (200 km). Following planetary naming conventions, the satellite will not be given an official name until the team can determine its orbit. As the satellite is too close to Polymele to be clearly seen by Earth-based or Earth-orbiting telescopes – without the help of a fortuitously positioned star – that determination will have to wait until either the team gets lucky with future occultation attempts or until Lucy approaches the asteroid in 2027. At the time of the observation Polymele was 480 million miles (770 million km) from Earth. Those distances are roughly equivalent to finding a quarter on a sidewalk in Los Angeles – while trying to spot it from a skyscraper in Manhattan.

Asteroids hold vital clues to deciphering the history of the solar system – perhaps even the origins of life – and solving these mysteries is a high priority for NASA. The Lucy team originally planned to visit one main belt asteroid and six Trojan asteroids, a previously unexplored population of asteroids that lead and follow Jupiter in its orbit around the Sun. In January of 2021, the team used the Hubble Space Telescope to discover that one of the Trojan asteroids, Eurybates, has a small satellite. Now with this new satellite, Lucy is on track to visit nine asteroids on this incredible 12-year voyage.

“Lucy’s tagline started out: 12 years, seven asteroids, one spacecraft,” said Lucy program scientist Tom Statler at NASA Headquarters in Washington. “We keep having to change the tagline for this mission, but that’s a good problem to have.”