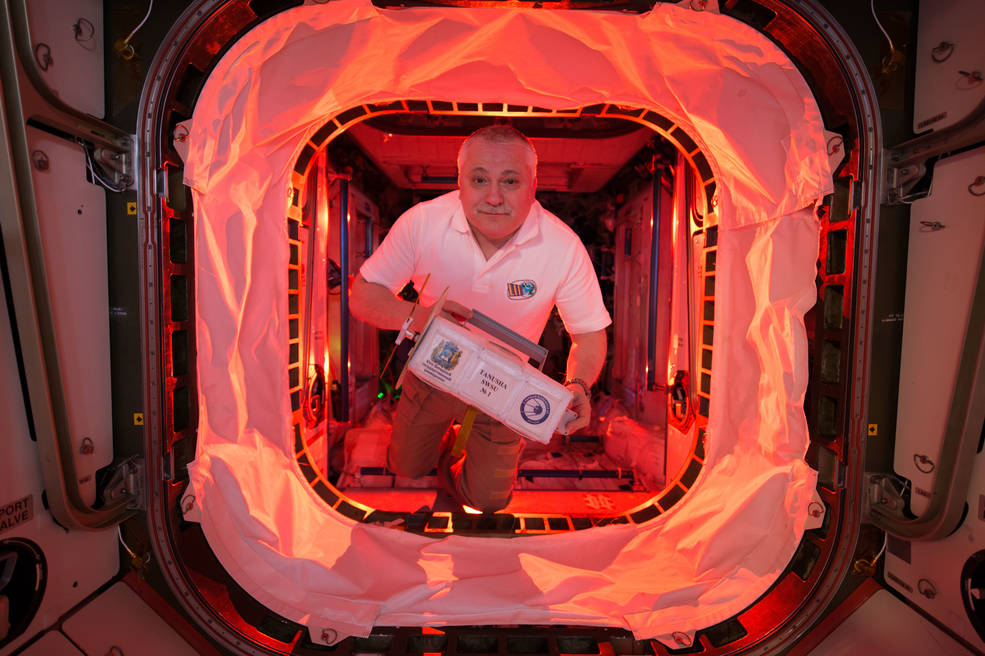 Expedition 52 commander Fyodor Yurchikhin holds one of the five satellites set to be deployed during the Russian spacewalk on Aug. 17, 2017.

Two Russian cosmonauts will venture outside the International Space Station Thursday, Aug. 17, to deploy several nanosatellites, collect research samples and perform structural maintenance. Coverage of the spacewalk will begin at 10 a.m. EDT on NASA Television and the agency’s website.

Ryazanskiy will begin the schedule of extravehicular activities with the manual deployment of five nanosatellites from a ladder outside the airlock. The satellites, each of which has a mass of about 11 pounds, have a variety of purposes.

One of the satellites, with casings made using 3-D printing technology, will test the effect of the low-Earth-orbit environment on the composition of 3-D printed materials. Another satellite contains recorded greetings to the people of Earth in 11 languages. A third satellite commemorates the 60th anniversary of the Sputnik 1 launch and the 160th anniversary of the birth of Russian scientist Konstantin Tsiolkovsky.

The spacewalkers also will collect residue samples from various locations outside the Russian segment of the station and install handrails and struts to facilitate future excursions.

In total, Russians Fyodor Yurchikhin and Sergey Ryazanskiy ended up releasing five nanosatellites by hand. One by one, the tiny craft — no more than 1 to 2 feet in size — tumbled safely away from the International Space Station.

The exterior casing of the first one tossed overboard was made with a 3-D printer. So were the battery packs inside. Researchers want to see how 3-D-made parts weather the space environment.

The 3-D satellite contains regular electronics. It also holds greetings to planet Earth in a variety of languages, courtesy of students at Siberia's Tomsk Polytechnic University, where the satellite was made.

The other satellites deployed Thursday have traditional spacecraft parts.

Each weighs just 10 to 24 pounds. They're expected to orbit for five to six months.

One commemorates the 60th anniversary of the world's first satellite, Sputnik 1, launched Oct. 4, 1957, by the Soviet Union. Another pays tribute to Russia's father of rocketry, Konstantin Tsiolkovsky. He was born 160 years ago next month.

The remaining two small satellites involve navigation and other experiments.

Yurchikhin and Ryazanskiy completed the satellite releases within an hour of venturing outside. Barely a minute passed between a few of the launches. The rest of their work took longer than expected, however, and Russia's Mission Control outside Moscow sent the planned six-hour spacewalk into overtime. It ended up lasting 7 1/2 hours, and the cosmonauts said their hands were tired. All but one task got done.

"We will have actually some grounds to get drunk today, I think," one of the cosmonauts joked in Russian. A flight controller replied that he'd do it for them.

The cosmonauts collected science experiments from outside their 250-mile-high home, and wiped thruster residue from various surfaces for analysis. Three Americans and one Italian also live on the space station.

Yurchikhin and Ryazansky began the space walk at 17:45. They are to stay outside the space station for six hours and five minutes, during which time they are to dismantle and install research equipment and test a new generation space suit, Orlan-MKS. 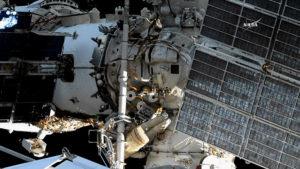 Expedition 52 Commander Fyodor Yurchikhin and Flight Engineer Sergey Ryazanskiy, of the Russian space agency Roscosmos, have completed a seven hour and 34 minute spacewalk. They re-entered the airlock at 6:10 p.m. EDT.
The two spacewalkers exited the Pirs Docking Compartment Station at 10:36 a.m. EDT. Among their accomplishments was manual deployment of five nanosatellites from a ladder outside the airlock.
One of the satellites, with casings made using 3-D printing technology, will test the effect of the low-Earth-orbit environment on the composition of 3-D printed materials. Another satellite contains recorded greetings to the people of Earth in 11 languages. A third satellite commemorates the 60th anniversary of the Sputnik 1 launch and the 160th anniversary of the birth of Russian scientist Konstantin Tsiolkovsky.
They also collected residue samples from various locations outside the Russian segment of the station.
Quelle: NASA
---
Update: 19.08.2017
.

The work took longer than expected and Russian flight controllers extended the spacewalk beyond the planned six-hour mark to give the cosmonauts time to finish as many of their tasks as possible before calling it a day.

Finally, at 6:10 p.m. EDT (GMT-4), Expedition 52 commander Fyodor Yurchikhin and flight engineer Sergey Ryazanskiy, back inside the Pirs airlock compartment, closed the hatch to officially end a seven-hour 34-minute spacewalk, the first in more than a year by Russian cosmonauts.

Mission managers said the spacewalkers accomplished all of their planned tasks except for one -- the installation of one handrail -- and that no specific problem put them behind schedule. Rather, the spacewalkers took their time and rested periodically at the insistence of Russian flight controllers.

"Everything is good, so we're insisting on your rest," a controller called up from Moscow in translated remarks. "You should rest, guys." A few moments later: "Is it enough for you to have a rest? How is the atmosphere inside your suits?"

"Well, if we could have some music, maybe, and girls to make massages it would of course be even better, but everything is fine," Ryazanskiy replied.

"It's the request of the medical team. They are worrying about your health."

"When we are back on the ground we'll discuss it," Ryazanskiy said.

"Of course, Sergey, we will be looking forward to your landing and this conversation," the flight controller replied. "So I would (not) like to bother you any more, please have a good rest."

The spacewalk got underway at 10:36 a.m. It was the ninth EVA overall for Yurchikhin and the fourth for Ryazanskiy.

Yurchikhin wore an upgraded Orlan MKS spacesuit with an improved temperature control system, a larger feed water bag, a new carbon dioxide measuring unit, improved biomedical sensors and an upgraded LCD display panel. The MKS suits will enable cosmonauts to carry out longer spacewalks than are possible with the standard MK-series like the one Ryazanskiy used.

After exiting the Pirs module, the cosmonauts retrieved a materials science sample pallet just outside the hatch before manually launching the five satellites one at a time, careful to aim then down and behind the station to prevent any future close encounters.

The first to be launched, known at "Tomsk," is an 11-pound satellite built with a 3D printer to help engineers how such materials respond to the space environment. It also carries amateur radio gear.

Another satellite will test systems needed by small "nanosats," two others will test networking and small-scale navigation technology and a fifth will serve as a passive target to help calibrate ground tracking systems. It also will help researchers study the density of the upper atmosphere as they monitor its eventual fall back to Earth in several months

After releasing the satellites, Yurchikhin and Ryazanskiy took photos of another experiment panel and an antenna boom before installing handrails and struts to help future spacewalkers move about the Russian segment of the space station.

They also installed 10 temperature sensors on the Poisk module and serviced another external experiment before returning to Pirs and ending the spacewalk.

But it was slow going throughout the day.

"That is just a really interesting day because whenever we need something it is in a completely different location than we think, and if we're moving somewhere, we're moving in the wrong direction," one spacewalker complained. "Just jinxed."

They insisted they could install the final handrail, but flight controllers told them to head back to Pirs.

This was the 202nd spacewalk devoted to station assembly and maintenance since construction began in 1998, the seventh so far this year and the first of 2017 by Russian cosmonauts. Total station spacewalk time now stands at 1,258 hours and 15 minutes, or 52.4 days.

Ryazanskiy's mark stands at 27 hours and 39 minutes outside the station during his four excursions.