NASA is inviting media to see a technology that could one day help land humans on Mars after it is inflated for the final time on Earth before its spaceflight demonstration later this year. The event will take place beginning 2 p.m. EDT Wednesday, June 15, at NASA’s Langley Research Center in Hampton, Virginia. 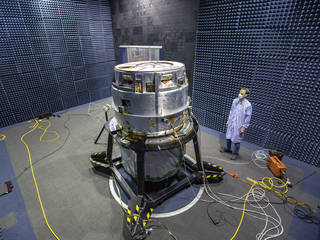 The LOFTID aeroshell is deflated and packed during testing of the flight re-entry vehicle at NASA Langley.
Credits: NASA/David C. Bowman

The Bernard Kutter Low-Earth Orbit Flight Test of an Inflatable Decelerator (LOFTID) is scheduled to launch with the National Oceanic and Atmospheric Administration’s JPSS-2 polar-orbiting satellite from Vandenberg Space Force Base in California on Nov. 1. After hitching a ride to space aboard a United Launch Alliance (ULA) Atlas V rocket, LOFTID will inflate and then descend back to Earth from low-Earth orbit to demonstrate how the inflatable heat shield can slow down a spacecraft to survive re-entry.

Engineers at Langley are completing work to ensure LOFTID is flight-ready before it is shipped to NASA’s Goddard Space Flight Center in Greenbelt, Maryland, for final acceptance testing, then to Vandenberg for launch.

NASA and ULA experts will provide a briefing on LOFTID and NASA’s Moon to Mars technologies, followed by interview availability and the opportunity to see several additional laboratories developing technologies that will enable NASA’s return to the Moon and future Mars exploration.

Media wishing to participate in person must request accreditation by 5 p.m. EDT Monday, June 13, from Kristyn Damadeo at: 757-755-0366 or kristyn.damadeo@nasa.gov. Virtual interview opportunities may also be arranged.

NASA is closely monitoring COVID-19 metrics and safety protocols are subject to change. Any updates will be provided as needed.

The LOFTID project is a part of the STMD Technology Demonstration Missions program. The project is managed by Langley with contributions from NASA’s Ames Research Center in California’s Silicon Valley, NASA’s Marshall Space Flight Center in Huntsville, Alabama, and NASA’s Armstrong Flight Research Center in Edwards, California. NASA’s Launch Services Program, based at the agency’s Kennedy Space Center in Florida, is managing the launch.