Weighing in at roughly 21 solar masses, the black hole in the X-ray binary system Cygnus X-1 is so massive that it challenges current stellar evolution models, a new study reveals. Ultimately, the mass of a black hole is determined by its parent star's properties and is generally constrained by the mass lost to stellar winds throughout its lifetime. If a black hole interacts with a binary companion star, the system emits X-rays and can sometimes form radio jets, which make the systems visible to electromagnetic observations as an X-ray binary. Measurements from known x-ray binaries have shown that black holes in these systems all have masses below 20 solar masses (M?), with the largest being 15-17 M?. However, gravitational wave detections of black hole merger events have found more massive black holes, reaching upwards of 50 M?, revealing a discrepancy that challenges current theories on black hole formation from massive stars. Here, James Miller-Jones and colleagues present new observations of Cygnus X-1 - a well-studied stellar-mass black hole located in our Milky Way Galaxy - using the Very Long Baseline Array (VLBA). Between May 29 and June 3, 2016, they performed six observations (one per day) of Cygnus X-1 with the VLBA. Using the new data and archival observations, Miller-Jones et al. refined the distance to the X-ray binary and found it to be farther away than previously estimated, thus raising the inferred mass of the system's black hole to 21 M?. The new measurements establish Cygnus X-1 as the most massive electromagnetically detected stellar-mass black hole currently known. According to the authors, for a black hole this massive to exist in the Milky Way, the mass lost through stellar winds during the progenitor star's evolution must have been lower than what current models predict.

The first black hole ever discovered still has a few surprises in store.

New observations of the black hole–star pair called Cygnus X-1 indicate that the black hole weighs about 21 times as much as the sun — nearly 1.5 times heavier than past estimates. The updated mass has astronomers rethinking how some black hole–forming stars evolve. For a star-sized, or stellar, black hole that massive to exist in the Milky Way, its parent star must have shed less mass through stellar winds than expected, researchers report online February 18 in Science.

Knowing how much mass stars lose through stellar winds over their lifetimes is important for understanding how these stars enrich their surroundings with heavy elements. It’s also key to understanding the masses and compositions of those stars when they explode and leave behind black holes.

The updated mass measurement of Cygnus X-1 is “a big change to an old favorite,” says Tana Joseph, an astronomer at the University of Amsterdam not involved in the work. Stephen Hawking famously bet physicist Kip Thorne that the Cygnus X-1 system, discovered in 1964, did not include a black hole — and conceded the wager in 1990, when scientists had broadly accepted that Cygnus X-1 contained the first known black hole in the universe (SN: 4/10/19).

Astronomers got a new look at Cygnus X-1 using the Very Long Baseline Array, or VLBA. This network of 10 radio dishes stretches across the United States, from Hawaii to the Virgin Islands, collectively forming a continent-sized radio dish. In 2016, the VLBA tracked radio-bright jets of material spewing out of Cygnus X-1’s black hole for six days (the time it took for the black hole and its companion star to orbit each other once). Those observations offered a clear view of how the black hole’s position in space shifted over the course of its orbit. That, in turn, helped researchers refine the estimated distance to Cygnus X-1.

The new observations suggest that Cygnus X-1 is about 7,200 light-years from Earth, rather than the previous estimate of about 6,000 light-years. This implies that the star in Cygnus X-1 is even brighter, and therefore bigger, than astronomers thought. The star weighs about 40.6 suns, the researchers estimate. The black hole must also be more massive in order to explain its gravitational tug on such a massive star. The black hole weighs about 21.2 suns — much heftier than its previously estimated 14.8 solar masses, the scientists say.

The new mass measurement for Cygnus X-1’s black hole is so big that it challenges astronomers’ understanding of the massive stars that collapse to form black holes, says study coauthor Ilya Mandel, an astrophysicist at Monash University in Melbourne, Australia.

“Sometimes stars are born with quite high masses — there are observations of stars being born with masses of well over 100 solar masses,” Mandel says. But such enormous stars are thought to shed much of their weight through stellar winds before turning into black holes. The bigger the star and the more heavy elements it contains, the stronger its stellar winds. So in heavy element–rich galaxies such as the Milky Way, big stars — no matter their starting mass — are supposed to shrink down to about 15 solar masses before collapsing into black holes.

The LIGO and Virgo gravitational wave detectors have discovered black holes weighing tens of solar masses in other galaxies (SN: 1/21/21). But that is probably because LIGO peers at distant galaxies that existed earlier in the universe, Joseph says. Back then, fewer heavy elements existed, so stellar winds were weaker. With the new Cygnus X-1 measurement, “now we have to say, hang on, we’re in a [heavy element]–rich environment compared to the early universe … but we still managed to make this really massive black hole,” she says, “so maybe we’re not losing as much mass through stellar winds as we initially thought.”

FIRST BLACK HOLE EVER DETECTED IS MORE MASSIVE THAN WE THOUGHT

New observations of the first black hole ever detected have led astronomers to question what they know about the Universe’s most mysterious objects.

Published today in the journal Science, the research shows the system known as Cygnus X-1 contains the most massive stellar-mass black hole ever detected without the use of gravitational waves. 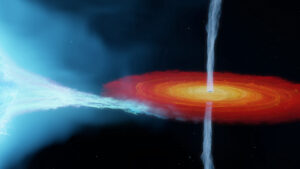 Cygnus X-1 is one of the closest black holes to Earth. It was discovered in 1964 when a pair of Geiger counters were carried on board a sub-orbital rocket launched from New Mexico.

The object was the focus of a famous scientific wager between physicists Stephen Hawking and Kip Thorne, with Hawking betting in 1974 that it was not a black hole. Hawking conceded the bet in 1990.

In this latest work, an international team of astronomers used the Very Long Baseline Array—a continent-sized radio telescope made up of 10 dishes spread across the United States—together with a clever technique to measure distances in space.

“If we can view the same object from different locations, we can calculate its distance away from us by measuring how far the object appears to move relative to the background,” said lead researcher, Professor James Miller-Jones from Curtin University and the International Centre for Radio Astronomy Research (ICRAR).

“If you hold your finger out in front of your eyes and view it with one eye at a time, you’ll notice your finger appears to jump from one spot to another. It’s exactly the same principle.”

Astronomers observed the Cygnus X-1 system from different angles using the orbit of the Earth around the Sun to measure the perceived movement of the system against the background stars. This allowed them to refine the distance to the system and therefore the mass of the black hole. Credit: International Centre for Radio Astronomy Research.

“Over six days we observed a full orbit of the black hole and used observations taken of the same system with the same telescope array in 2011,” Professor Miller-Jones said. “This method and our new measurements show the system is further away than previously thought, with a black hole that’s significantly more massive.”

Co-author Professor Ilya Mandel from Monash University and the ARC Centre of Excellence in Gravitational Wave Discovery (OzGrav) said the black hole is so massive it’s actually challenging how astronomers thought they formed. 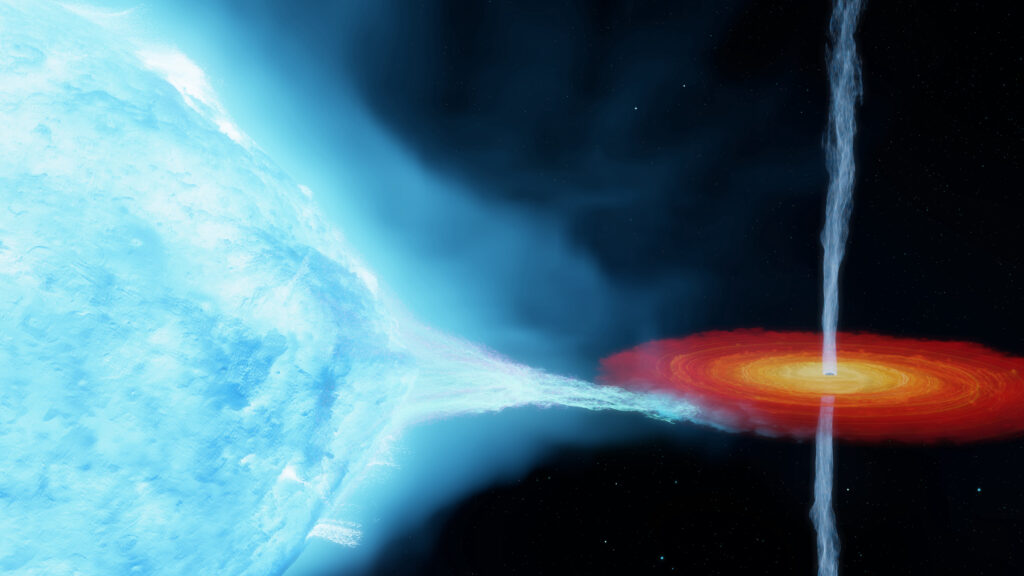 “Stars lose mass to their surrounding environment through stellar winds that blow away from their surface. But to make a black hole this heavy, we need to dial down the amount of mass that bright stars lose during their lifetimes” he said.

“The black hole in the Cygnus X-1 system began life as a star approximately 60 times the mass of the Sun and collapsed tens of thousands of years ago,” he said. “Incredibly, it’s orbiting its companion star—a supergiant—every five and a half days at just one-fifth of the distance between the Earth and the Sun.

“These new observations tell us the black hole is more than 20 times the mass of our Sun—a 50 per cent increase on previous estimates.” 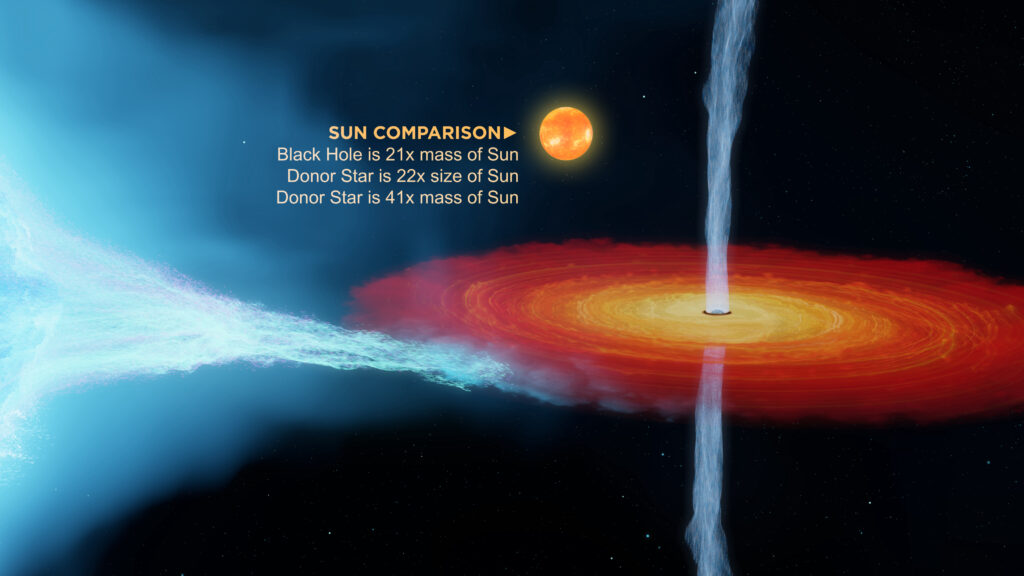 Recent observations show the black hole in the Cygnus X-1 system is 21 times the mass of the Sun—a 50 per cent increase on previous estimates. To form such a massive black hole, astronomers had to revise their estimates of how much mass stars lose via stellar winds. Credit: International Centre for Radio Astronomy Research.

Xueshan Zhao is a co-author on the paper and a PhD candidate studying at the National Astronomical Observatories—part of the Chinese Academy of Sciences (NAOC) in Beijing.

“Using the updated measurements for the black hole’s mass and its distance away from Earth, I was able to confirm that Cygnus X-1 is spinning incredibly quickly—very close to the speed of light and faster than any other black hole found to date,” she said.

“I’m at the beginning of my research career, so being a part of an international team and helping to refine the properties of the first black hole ever discovered has been a great opportunity.”