NASA’s Fermi Gamma-ray Space Telescope has discovered a faint but sprawling glow of high-energy light around a nearby pulsar. If visible to the human eye, this gamma-ray “halo” would appear about 40 times bigger in the sky than a full Moon. This structure may provide the solution to a long-standing mystery about the amount of antimatter in our neighborhood.

“Our analysis suggests that this same pulsar could be responsible for a decade-long puzzle about why one type of cosmic particle is unusually abundant near Earth,” said Mattia Di Mauro, an astrophysicist at the Catholic University of America in Washington and NASA’s Goddard Space Flight Center in Greenbelt, Maryland. “These are positrons, the antimatter version of electrons, coming from somewhere beyond the solar system.”

A paper detailing the findings was published in the journal Physical Review D on Dec. 17 and is available online.

A neutron star is the crushed core left behind when a star much more massive than the Sun runs out of fuel, collapses under its own weight and explodes as a supernova. We see some neutron stars as pulsars, rapidly spinning objects emitting beams of light that, much like a lighthouse, regularly sweep across our line of sight.

Geminga (pronounced geh-MING-ga), discovered in 1972 by NASA’s Small Astronomy Satellite 2, is among the brightest pulsars in gamma rays. It is located about 800 light-years away in the constellation Gemini. Geminga’s name is both a play on the phrase “Gemini gamma-ray source” and the expression “it’s not there” —  referring to astronomers’ inability to find the object at other energies — in the dialect of Milan, Italy.

This model of Geminga's gamma-ray halo shows how the emission changes at different energies, a result of two effects. The first is the pulsar's rapid motion through space over the decade Fermi's Large Area Telescope has observed it. Second, lower-energy particles travel much farther from the pulsar before they interact with starlight and boost it to gamma-ray energies. This is why the gamma-ray emission covers a larger area at lower energies. One GeV represents 1 billion electron volts — billions of times the energy of visible light.
Credits: NASA’s Goddard Space Flight Center/M. Di Mauro

Geminga was finally identified in March 1991, when flickering X-rays picked up by Germany’s ROSAT mission revealed the source to be a pulsar spinning 4.2 times a second.

A pulsar naturally surrounds itself with a cloud of electrons and positrons. This is because the neutron star’s intense magnetic field pulls the particles from the pulsar’s surface and accelerates them to nearly the speed of light.

Electrons and positrons are among the speedy particles known as cosmic rays, which originate beyond the solar system. Because cosmic ray particles carry an electrical charge, their paths become scrambled when they encounter magnetic fields on their journey to Earth. This means astronomers cannot directly track them back to their sources.

For the past decade, cosmic ray measurements by Fermi, NASA’s Alpha Magnetic Spectrometer (AMS-02) aboard the International Space Station, and other space experiments near Earth have seen more positrons at high energies than scientists expected. Nearby pulsars like Geminga were prime suspects.

Then, in 2017, scientists with the High-Altitude Water Cherenkov Gamma-ray Observatory (HAWC) near Puebla, Mexico, confirmed earlier ground-based detections of a small gamma-ray halo around Geminga. They observed this structure at energies from 5 to 40 trillion electron volts — light with trillions of times more energy than our eyes can see.

Scientists think this emission arises when accelerated electrons and positrons collide with nearby starlight. The collision boosts the light up to much higher energies. Based on the size of the halo, the HAWC team concluded that Geminga positrons at these energies only rarely reach Earth. If true, it would mean that the observed positron excess must have a more exotic explanation.

Particles traveling near light speed can interact with starlight and boost it to gamma-ray energies. This animation shows the process, known as inverse Compton scattering. When light ranging from microwave to ultraviolet wavelengths collides with a fast-moving particle, the interaction boosts it to gamma rays, the most energetic form of light.
Credits: NASA's Goddard Space Flight Center

But interest in a pulsar origin continued, and Geminga was front and center. Di Mauro led an analysis of a decade of Geminga gamma-ray data acquired by Fermi’s Large Area Telescope (LAT), which observes lower-energy light than HAWC.

“To study the halo, we had to subtract out all other sources of gamma rays, including diffuse light produced by cosmic ray collisions with interstellar gas clouds,” said co-author Silvia Manconi, a postdoctoral researcher at RWTH Aachen University in Germany. “We explored the data using 10 different models of interstellar emission.”

What remained when these sources were removed was a vast, oblong glow spanning some 20 degrees in the sky at an energy of 10 billion electron volts (GeV). That’s similar to the size of the famous Big Dipper star pattern — and the halo is even bigger at lower energies. 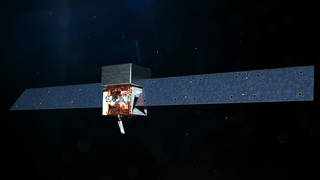 “Lower-energy particles travel much farther from the pulsar before they run into starlight, transfer part of their energy to it, and boost the light to gamma rays. This is why the gamma-ray emission covers a larger area at lower energies ,” explained co-author Fiorenza Donato at the Italian National Institute of Nuclear Physics and the University of Turin. “Also, Geminga’s halo is elongated partly because of the pulsar’s motion through space.”

The team determined that the Fermi LAT data were compatible with the earlier HAWC observations. Geminga alone could be responsible for as much as 20% of the high-energy positrons seen by the AMS-02 experiment. Extrapolating this to the cumulative emission from all pulsars in our galaxy, the scientists say it’s clear that pulsars remain the best explanation for the positron excess.

“Our work demonstrates the importance of studying individual sources to predict how they contribute to cosmic rays,” Di Mauro said. “This is one aspect of the exciting new field called multimessenger astronomy, where we study the universe using multiple signals, like cosmic rays, in addition to light.”

The Fermi Gamma-ray Space Telescope is an astrophysics and particle physics partnership managed by NASA's Goddard Space Flight Center in Greenbelt, Maryland. Fermi was developed in collaboration with the U.S. Department of Energy, with important contributions from academic institutions and partners in France, Germany, Italy, Japan, Sweden and the United States.