WASHINGTON: On-orbit maneuver capabilities are for the first time being explicitly considered in Air Force planning for future launch services, as part of a wide-ranging new study to develop a post-2025 National Security Launch Architecture (NSLA).

Under an Oct. 25 Request for Information (RFI), the Air Force Space and Missile Systems Center (SMC) is seeking commercial industry for ideas on emerging capabilities for launch, maneuver and transport (LM&T) to improve resiliency in the contested space environment of the future. In particular, SMC is interested in rapid launch, orbit transfer, on-orbit servicing and rideshare/hosted payloads.

“This is one of the first-of-its-kind RFIs and so confirms what our analysis indicated—that an OOS (on-orbit services) market is starting to materialize,” Ron Lopez, president of Astroscale US, told Breaking D today. Astroscale, a Japanese startup, is focused on on-orbit debris removal, as well as on-orbit servicing.

On-orbit transfer and maneuvering capabilities also could potentially enable future national security satellites to avoid debris or antisatellite weapons, or underpin space weapons development. (The US has accused Russia and China of developing such capabilities to build space-based weapons.)

SpaceLogistics is the first industry firm to launch an on-orbit servicing satellite, launching its Mission Extension Vehicle-1 (MEV-1) on Oct. 9. MEV-1 will dock with Intelsat’s ailing Intelsat 901 satellite in the so-called graveyard orbit above Geosynchronous Orbit (GEO, some 36,000 km above sea level). The MEV-1 will provide the satellite with electronic propulsion power so it can push itself back into GEO and extend its life by an impressive five years. The MEV-1 spacecraft has a 15-year lifespan so it could potentially be moved to service another GEO satellite after completing its first mission.

According to the RFI, “SMC is particularly interested in industry perspectives, projections, and predictions regarding future commercial or civil capability and how companies may also satisfy National Security Space (NSS) operational requirements in contested space environments (emphasis added). NSLA industry interaction is anticipated to be iterative over an extended period of time. This RFI is the first in a series of planned discussions.”

As Breaking D readers know, the Air Force has been discussing with industry how next-generation launch services can be made more resilient against possible attackby Russia and China. 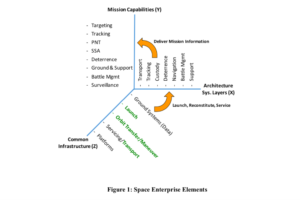 The RFI is feeding into the NSLA study, led by SMC Portfolio Architect Col. Russell Teehan, that in turn will determine requirements for the next phase, Phase 3, of the Air Force National Security Space Launch effort. The $2.3 billion Phase 2 program is slated to down-select from the four current competitors — ULA, Northrop Grumman, SpaceX and Blue Origin — to two launch providers in June 2020. The two winners, under a 60/40 split, will be contracted for some 30 national security launches between 2022 and 2027, representing hundreds of millions — if not several billion — dollars in contract awards. Phase 3 would commence after that, opening up the possibility for other competitors to be chosen.

“Through the NSLA Study, the US Air Force is evaluating next-generation LM&T architectures and emerging technologies primarily from the warfighter’s point of view for small, medium, intermediate, and heavy payload classes analyzed over two sequential epochs,” explains the RFI. These are:

Epoch 2: -2030-2050 (Focus of future RFIs)
Future payload concepts under Epoch 1 will be combined with next generation NSS satellite launch requirements to form an integrated NSLA payload manifest typical of a multi-domain space enterprise.

The Aerospace Corporation, ExoAnalytics Solutions, Centauri Corp., ManTech and Booz Allen Hamilton are helping the Air Force with the study, and reviewing the RFI submissions.

In addition, SMC is asking interested firms to answer a host of questions about future commercial market projections, in order to help the Air Force design its future procurement strategy to take best advantage of commercially available launch services. Responses are due Nov. 19, and the Air Force tentatively plans to hold the first industry day in Dec. 5-6.