Life as we know it needs water to thrive. Even so, we see life persist in the driest environments on Earth. But how dry is too dry? At what point is an environment too extreme for even microorganisms, the smallest and often most resilient of lifeforms, to survive? These questions are important to scientists searching for life beyond Earth, including on the planet Mars. To help answer this question, a research team from NASA’s Ames Research Center in California’s Silicon Valley traveled to the driest place on Earth: the Atacama Desert in Chile, a 1000 kilometer strip of land on South America’s west coast.

The Atacama Desert is one of the Earth’s environments that comes closest to the parched Martian surface. But the Atacama isn’t uniformly dry. When traveling from the relatively less dry southern end of the desert in central Chile to its extremely dry center in northern Chile, the annual precipitation shifts from a few millimeters of rain per year to only a few millimeters of rain per decade. 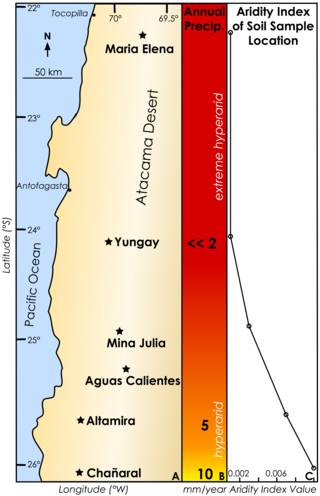 This map of the Atacama Desert shows the change in annual precipitation from one end of the desert to the other. The aridity index mentioned is a value based on annual rainfall and water loss.
Credits: NASA Ames Research Center

This non-uniformly dry environment provides an opportunity to search for life at decreasing levels of precipitation. By pinning down how much water an environment needs to be habitable, i.e. be able to support lifeforms, the research team was able to determine that a dry limit of habitability exists.

"On Earth, we find evidence of microbial life everywhere," said Mary Beth Wilhelm, an astrobiologist at Ames and lead author of the new study published in the journal Astrobiology this month. "However, in extreme environments, it’s important to know whether a microbe is dormant and just barely surviving, or really alive and well."

Biologists define something as alive if it is capable of growth and reproduction. If microbes are simply surviving or performing a few basic functions, they’ll die within one generation without passing on any genetic information. When looking for the potential of life on Mars, scientists need to see this reproduction take place, which leads to population growth and genetic change from one generation to the next.

"By learning if and how microbes stay alive in extremely dry regions on Earth, we hope to better understand if Mars once had microbial life and whether it could have survived until today," said Wilhelm.

Scientists have a few tools to figure out whether a sample is growing or just surviving. One important sign is stress. Living long enough to grow and adapt in extreme deserts like the Atacama – or potentially on Mars – is no easy task. If life is really growing in this extremely dry environment, it’s going to be stressed, while dormant life simply surviving will not. Because dormant life is not able to even try to grow or reproduce, there are no stress markers, like changes in the structure of certain cell molecules. Astrobiologists can look for some tell-tale signs of this stress to search for evidence of growth in the parched soils.

The science team collected soil samples from across the Atacama Desert and brought them back to their lab at Ames. There, they performed tests to identify stress markers in the samples by looking at features common to all known living organisms. 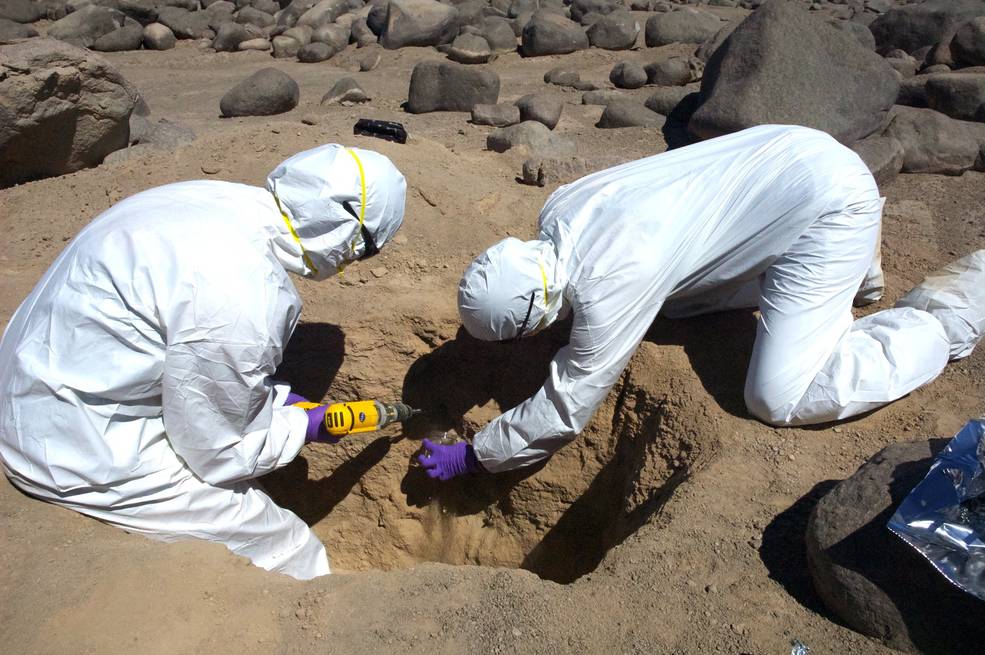 Researchers collect samples from the surface of the Atacama Desert in Chile, going a few centimeters into the ground.
Credits: NASA Ames Research Center

One stress marker can be found in lipids, molecules that make up the outer surface of a living microbial cell, known as its membrane. When cells are exposed to stressful conditions, their lipids change structure, becoming more rigid.

Scientists found this marker in less dry parts of the Atacama, but it was mysteriously missing from the driest regions, where microbes should be more stressed. Based on these and other results, the team believes that a line of transition exists between where minute amounts of water are still enough for life to grow and where the environment is so dry that microorganisms merely survive without growth in surface soil in the Atacama.

Dating the Remnants of Life

Scientists can tell how long cells have been dead by studying a type of molecule called amino acids, the building blocks of proteins. The structures of these amino acids take two forms, each a mirror reflection of the other, like a pair of hands. In fact, this "handedness" is the term scientists use to describe these structures.

All life on Earth is built with "left-handed" amino acid molecules. However, when a cell dies, some of its amino acids change at a known rate into the reflecting "right-handed" structure, eventually balancing into a 50-50 ratio over many years.

By looking at this ratio in the driest Atacama soils, the scientists found microbes there that have been dead for at least 10,000 years. Finding even the remnants of life this old is extremely rare, and surprising for a sample sitting in the surface of Earth.

Getting Ready for Mars

Mars is 1,000 times drier than even the driest parts of the Atacama, which makes it less likely that microbial life as we know it exists on the planet’s surface, even with some access to water. However, even in the driest areas of Chile’s desert, remnants of past microbial life from wetter times in the Atacama’s history were clearly present and well preserved over thousands of years. This means that because scientists know that Mars was a wetter, more vibrant planet in its past, traces of that ancient life might still be intact.

"Before we go to Mars, we can use the Atacama like a natural laboratory and, based on our results, adjust our expectations for what we might find when we get there," said Wilhelm. "Knowing the surface of Mars today might be too dry for life to grow, but that traces of microbes can last for thousands of years helps us design better instruments to not only search for life on and under the planet’s surface, but to try and unlock the secrets of its distant past."