Astronomers have produced a highly detailed image of the Crab Nebula, by combining data from telescopes spanning nearly the entire breadth of the electromagnetic spectrum, from radio waves seen by the Karl G. Jansky Very Large Array (VLA) to the powerful X-ray glow as seen by the orbiting Chandra X-ray Observatory. And, in between that range of wavelengths, the Hubble Space Telescope's crisp visible-light view, and the infrared perspective of the Spitzer Space Telescope.

This video starts with a composite image of the Crab Nebula, a supernova remnant that was assembled by combining data from five telescopes spanning nearly the entire breadth of the electromagnetic spectrum: the Very Large Array, the Spitzer Space Telescope, the Hubble Space Telescope, the XMM-Newton Observatory, and the Chandra X-ray Observatory. The video dissolves to the red-colored radio-light view that shows how a neutron star’s fierce “wind” of charged particles from the central neutron star energized the nebula, causing it to emit the radio waves. The yellow-colored infrared image includes the glow of dust particles absorbing ultraviolet and visible light. The green-colored Hubble visible-light image offers a very sharp view of hot filamentary structures that permeate this nebula. The blue-colored ultraviolet image and the purple-colored X-ray image shows the effect of an energetic cloud of electrons driven by a rapidly rotating neutron star at the center of the nebula.
Credits: NASA, ESA, J. DePasquale (STScI)

The Crab Nebula, the result of a bright supernova explosion seen by Chinese and other astronomers in the year 1054, is 6,500 light-years from Earth. At its center is a super-dense neutron star, rotating once every 33 milliseconds, shooting out rotating lighthouse-like beams of radio waves and light -- a pulsar (the bright dot at image center). The nebula's intricate shape is caused by a complex interplay of the pulsar, a fast-moving wind of particles coming from the pulsar, and material originally ejected by the supernova explosion and by the star itself before the explosion. 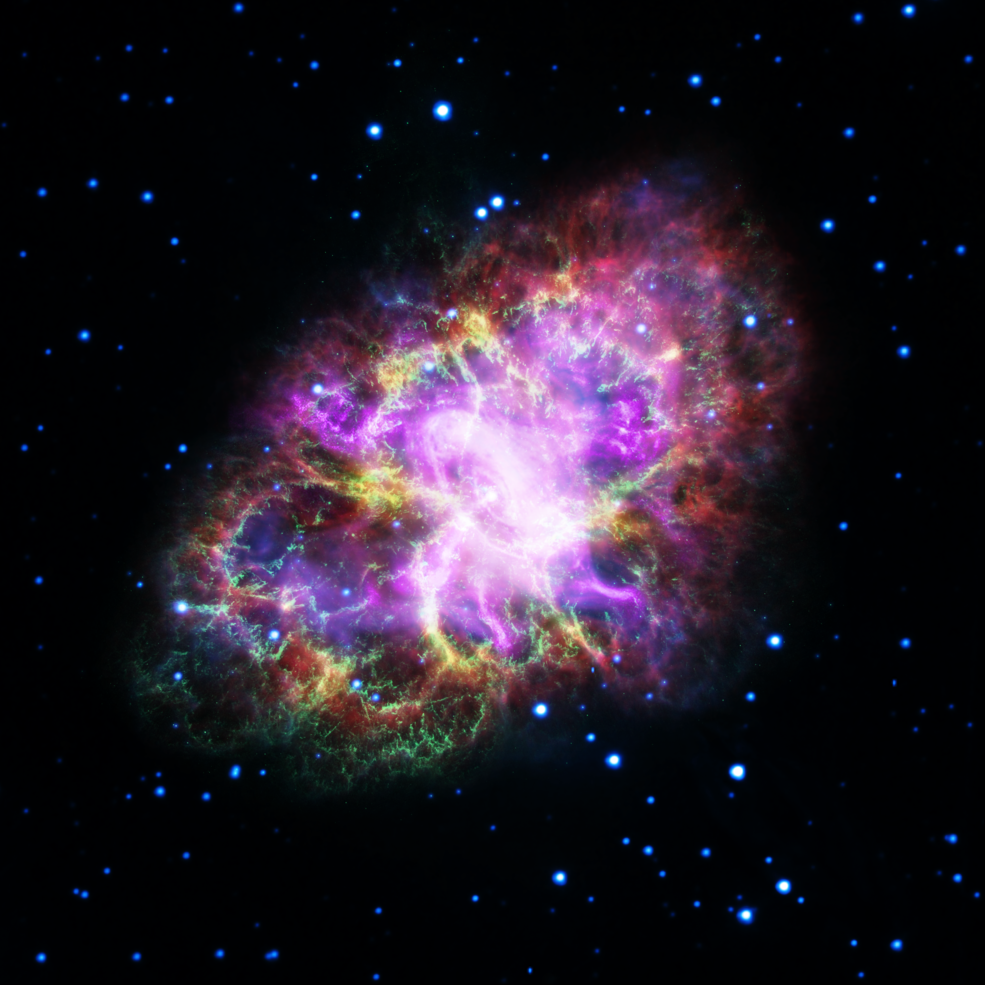 This composite image of the Crab Nebula, a supernova remnant, was assembled by combining data from five telescopes spanning nearly the entire breadth of the electromagnetic spectrum: the Very Large Array, the Spitzer Space Telescope, the Hubble Space Telescope, the XMM-Newton Observatory, and the Chandra X-ray Observatory.
Credits: NASA, ESA, NRAO/AUI/NSF and G. Dubner (University of Buenos Aires)

The new VLA, Hubble and Chandra observations all were made at nearly the same time in November of 2012. A team of scientists led by Gloria Dubner of the Institute of Astronomy and Physics (IAFE), the National Council of Scientific Research (CONICET) and the University of Buenos Aires in Argentina then made a thorough analysis of the newly revealed details in a quest to gain new insights into the complex physics of the object. They are reporting their findings in the Astrophysical Journal.

"Comparing these new images, made at different wavelengths, is providing us with a wealth of new detail about the Crab Nebula. Though the Crab has been studied extensively for years, we still have much to learn about it," Dubner said.