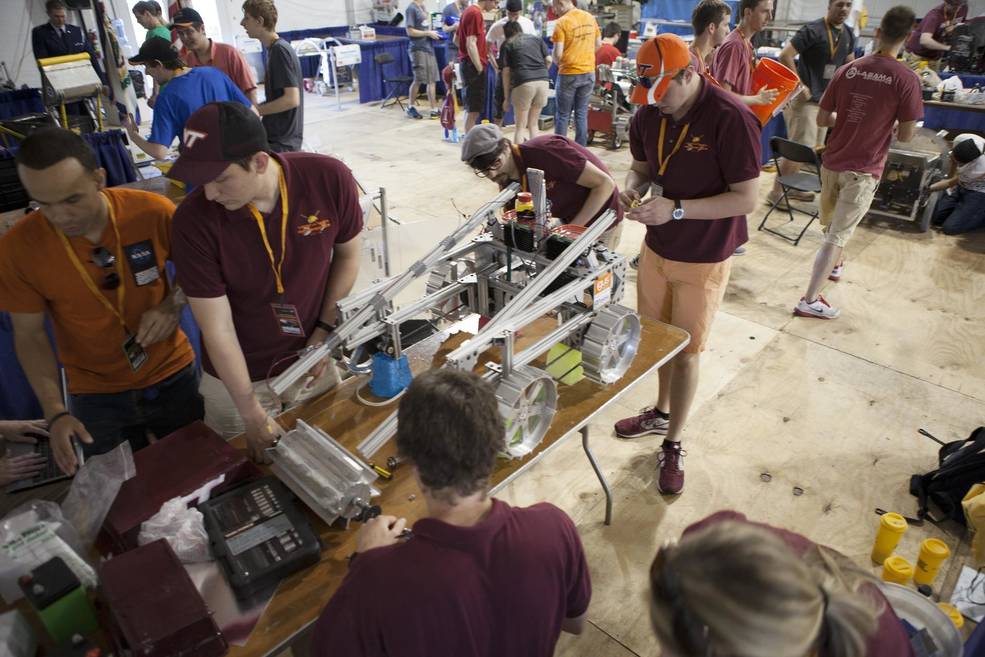 Team members from the University of Alabama prepare their robot for the mining portion of NASA's 2014 Robotics Mining Competition at the Kennedy Space Center Visitor Complex in Florida.
Credits: NASA/Frankie Martin

News media are invited to cover NASA's 2017 Robotics Mining Competition (RMC) on Thursday, May 25, from 10 a.m. to noon EDT. Center Director, Bob Cabana, also will be available for one-on-one interviews from 10 to 11 a.m. at the RMC Arena.

Media also may cover a NASA’s Women in STEM mentoring event for RMC participants at the visitor complex’s Kurt H. Debus Center from 8 to 10 a.m.

More than 45 teams have designed and built remote-controlled excavator robots to traverse the simulated Martian terrain and excavate simulated Martian dirt. During the competition, the teams' robots will go head-to-head to determine which machine can collect and move the most regolith within a specified amount of time.

The competition is a NASA Human Exploration and Operations Mission Directorate project designed to engage and retain students in science, technology, engineering and math or STEM fields by expanding opportunities for student research and design. The project provides a competitive environment to foster innovative ideas and solutions that could potentially be used on NASA’s journey to Mars.

Although the competition is for college students, the event offers many opportunities for students of all ages. NASA is hosting a college recruitment fair for high school sophomores, juniors and seniors, showcasing STEM education opportunities available at top colleges and universities across the nation. The event also will offer additional STEM activities for students of all ages.