Former US astronaut Alan Bean, who was the fourth man to walk on the Moon, has died in Texas aged 86, his family has said.

In later life he became an accomplished artist, producing paintings that were inspired by space.

His family said he had fallen ill two weeks ago in Indiana and died peacefully at a hospital in Houston.

Astronaut Mike Massimino described Bean as "the most extraordinary person I ever met".

"He was a one-of-a-kind combination of technical achievement as an astronaut and artistic achievement as a painter," said Massimino, who flew on two space shuttle missions.

Alan Bean, a former US Navy test pilot, was selected by Nasa as a trainee in 1963.

He went into space twice, the first time in November 1969 as the lunar module pilot on the Apollo 12 Moon-landing mission.

He later described how complex and risky the mission had been: "It was more science fiction to us, I think, than it was to the average public.

"We knew how difficult it was. We knew how many things had to go right. This is like going half way across the Sahara Desert and stopping your car and getting out and camping out for a couple of days and then hoping when you start it up the battery works because if doesn't you're up creek."

n 1973 he was commander of the second crewed flight to Skylab - America's first space station.

He retired from Nasa in 1981 and carved a successful career as an artist. His paintings, inspired by space travel, featured lunar boot prints as well as small pieces of his mission patches which were stained by Moon dust.

"While he captured these great scenes from history, and scenes that never could be captured by a camera, and only in painting, he would also basically sprinkle them with moon dust," space history specialist Robert Z Pearlman told the BBC.

"And so they are a tremendous legacy for not just him but the Apollo programme in general."

The three astronauts who preceded Alan Bean to the moon's surface were Neil Armstrong and Buzz Aldrin on Apollo 11 in July 1969, and Charles Conrad who was also on the Apollo 12 mission.

Of the four men, only Aldrin is still alive, now aged 88.

Alan Bean is survived by his wife Leslie, a sister and two children from a previous marriage.

Apollo 12 astronaut Alan Bean walks through an exhibition of his own artwork, mounted in 2009. Photograph: Jacquelyn Martin/AP

The astronaut Alan Bean, who in 1969 became the fourth person to walk on the moon, has died. He was 86. A statement released by Nasa and family members said he died on Saturday in Houston, after a short illness.

Bean was the lunar module pilot on Apollo 12, which made the second moon landing. He then commanded the second crewed flight to the first US space station, Skylab, in 1973. On that mission, he orbited the Earth for 59 days and traveled 24.4 million miles, a world record at the time.

Bean spent a total of 69 days in space, including 31 hours on the moon. Only 12 people have ever set foot on the lunar surface. Bean left his footprints on a region called the Ocean of Storms four months after Neil Armstrong became the first man to walk on the moon, in the historic Apollo 11 mission of July 1969.

“I remember once looking back at Earth and starting to think, ‘Gee, that’s beautiful,’” Bean told People magazine in 1981. “Then I said to myself, ‘Quit screwing off and go collect rocks.’ We figured reflection wasn’t productive.”

The mission was a success, though it started with a jolt. Shortly after liftoff, the rocket was struck by lightning. The crew was able to continue the three-day flight to the moon.

In a 1998 Nasa oral history, Bean recalled his excitement at preparing to fly to the moon. “When you’re getting ready to go to the moon,” he said, “every day’s like Christmas and your birthday rolled into one. I mean, can you think of anything better?”

Born on 15 March 1932, in Wheeler, Texas, Bean received a degree in aeronautical engineering from the University of Texas in 1955. He attended navy test pilot school and was one of 14 trainees selected by Nasa for its third group of astronauts in October 1963.

“I’d always wanted to be a pilot, ever since I could remember,” he said in the 1998 Nasa history. “I think a lot of it just had to do with it looked exciting. It looked like brave people did that. I wanted to be brave, even though I wasn’t brave at the time. I thought maybe I could learn to be, so that appealed to me.”

Bean also played a key role in preparing future astronauts, serving until the first flight of the space shuttle in 1981. He even worked with Star Trek actor Nichelle Nichols on outreach efforts.

Pete Conrad, Richard Gordon and Bean, seen at their mission simulator at the Kennedy Space Center in 1969. Photograph: HO/AFP/Getty Images

In 2009, to mark the 40th anniversary of the Apollo 11 landing, Bean exhibited his paintings of lunar scenes at the Smithsonian’s National Air and Space Museum in Washington. His paintings feature canvases textured with lunar boot prints and embedded with small pieces of his mission patches, stained with moon dust.

“Alan Bean was the most extraordinary person I ever met,” said Mike Massimino, who flew on two space shuttle missions to service the Hubble Space Telescope, in a statement. “He was a one-of-a-kind combination of technical achievement as an astronaut and artistic achievement as a painter.”

Nasa administrator Jim Bridenstine said: “Alan Bean once said, ‘I have the nicest life in the world.’ It’s a comforting sentiment to recall as we mourn his passing.” He added: “As all great explorers are, Alan was a boundary pusher. We will remember him fondly as the great explorer who reached out to embrace the universe.”

Bean’s wife of 40 years, Leslie Bean, said he died peacefully surrounded by those who loved him. He fell ill two weeks ago, while traveling in Fort Wayne, Indiana.

“Alan was the strongest and kindest man I ever knew,” said Leslie Bean. “He was the love of my life and I miss him dearly.”

He is survived by his wife, a sister and two children. 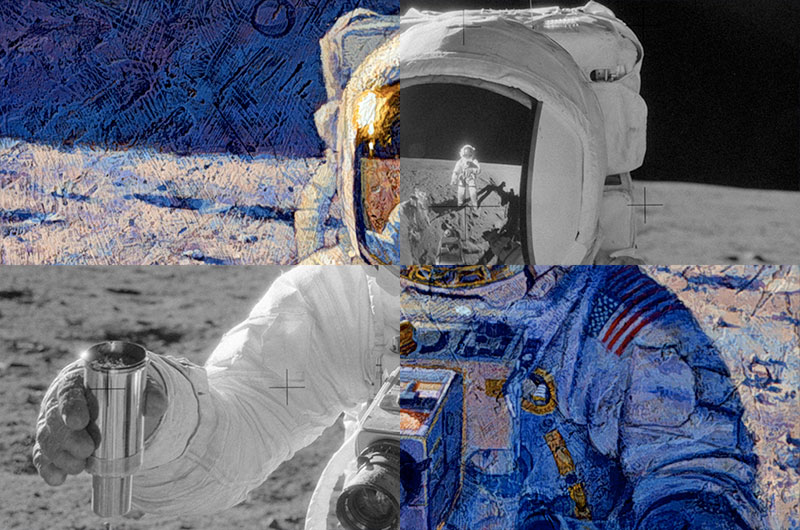 Alan Bean walked on the moon on Apollo 12, commanded the second Skylab crew and then resigned after 18 years as an astronaut to paint the remarkable worlds and sights he had seen.

Bean was lunar module pilot on the November 1969 Apollo 12 mission, the second moon landing.  He and mission commander Pete Conrad explored on the lunar Ocean of Storms and set up several experiments powered by a small nuclear generator.

“As all great explorers are, Alan was a boundary pusher," NASA Administrator Jim Bridenstine said in a statement. "Rather than accepting the limits of technology, science, and even imagination, he sought to advance those lines -- in all his life’s endeavors.

In an interview for NASA's 50th anniversary in 2008, Bean said walking on the moon was one of the most fun things he had done.

"At one-sixth gravity in that suit, you have to move in a different way," he said. "One of the paintings that I did was called 'Tip Toeing on The Ocean of Storms.' And it shows that I'm up on my tip toes as I'm moving around. And we did that a lot. On Earth, I weighed 150 pounds; my suit and backpack weighed another 150. 300 pounds. Up there, I weighed only 50. So I could prance around on my toes. It was quite easy to do. And if you remember back to some of the television we saw, Buzz and Neil on the Moon with Apollo 11. Black and white. They were bouncing around a lot. They were really bouncing on their tip toes. Quite fun to do. Someday maybe be a great place for a vacation."

NASA remembers Apollo 12 astronaut Alan Bean, who walked on the Moon in 1969, commanded the second Skylab crew in 1973 and went on in retirement to paint the remarkable worlds and sights he had seen like no other artist.
Credits: NASA

As spacecraft commander of the Skylab II mission II, from July 19 to Sept. 25, 1973, Bean and fellow crewmembers Owen K. Garriott and Jack R. Lousma accomplished half again as much as pre-mission goals. Their 59-day, 24.4-million-mile flight was a world record.

Alan L. Bean was born in Wheeler, Texas.  He graduated from Paschal High School in Fort Worth, Texas. In 1955, Bean was awarded an aeronautical engineering degree from the University of Texas.

He was a Navy ROTC student there and was commissioned when he graduated.  After he finished flight training, he spent four years with a jet attack squadron and then attended Navy test pilot school.

Bean flew as a test pilot on several types of aircraft before he was selected with the third group of NASA astronauts in October 1963.  He served as a backup for crewmembers on Gemini 10 and Apollo 9.

After his Apollo and Skylab flights, Bean remained with NASA while many of his astronaut colleagues went elsewhere as the Apollo program wound down.  He served as a backup spacecraft commander for the last Apollo flight, the Apollo-Soyuz Test Project in July 1975.

He retired from the Navy as a captain in October 1975 but continued to work with NASA as a civilian. He headed the Astronaut Office’s Astronaut Candidate Operations and Training Group at Johnson Space Center.

Bean logged 1,672 hours in space, including more than 10 hours of spacewalks on the moon and in Earth orbit. He flew 27 aircraft types and accumulated more than 7,145 hours of flight time, 4,890 hours of it in jets.

During his career he established 11 records in space and aeronautics, and received many awards and honors.

His decision to retire from NASA to devote full time to painting was, he said, based on his 18 years as an astronaut, during which he visited places and saw things no artist’s eye had ever seen firsthand.  He said he hoped to capture those experiences through his art.

He followed that dream for many years at his home studio in Houston, with considerable success. His paintings were particularly popular among space enthusiasts. 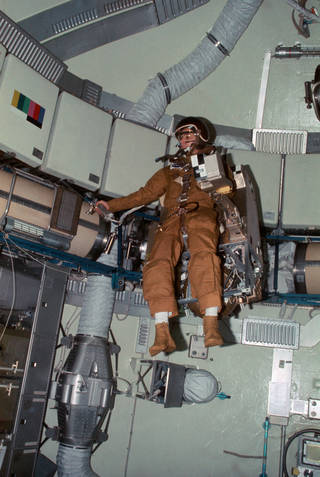 Astronaut Alan Bean, Skylab 3 commander, flies the M509 Astronaut Maneuvering Equipment in the forward dome area of the Orbital Workshop on the space station cluster in Earth orbit. Bean is strapped into the back mounted, hand-controlled Automatically Stabilized Maneuvering Unit (ASMU). The dome area is about 22 feet in diameter and 19 feet from top to bottom.