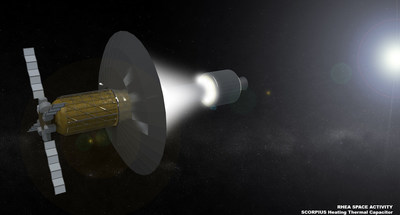 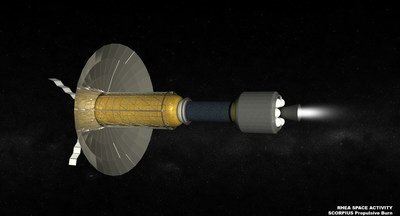 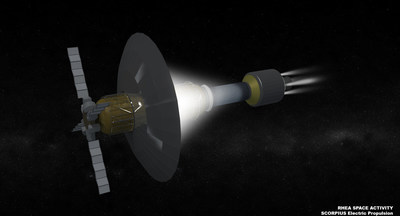 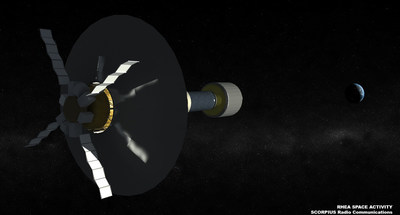 Phase I awardees will have the opportunity to showcase their solutions at the Space Force Pitch Day virtual event on August 19th, 2021.

The proposed craft, dubbed SCORPIUS, will use an origami-inspired, unfolding solar reflector to heat a tungsten block that will vaporize propellant to generate its main propulsion. This multi-role solar reflector will also act as a large-area communications antenna that can also redirect solar light to generate power for all of the spacecraft's subsystems. This architecture will allow for the USSF to rapidly reposition SCORPIUS in deep space to conduct offensive and defensive communications operations.

SCORPIUS is intended to provide a radical, cost-effective solution to a range of problems now facing USAF planners as they consider the challenges of deep-space travel. As U.S. and international spacecraft operations gradually extend past traditional geosynchronous orbits, spacecraft will require increased propulsion capabilities.

To solve the payload and deployment time issue, the Defense Advanced Research Projects Agency (DARPA) program known as "Demonstration Rocket for Agile Cislunar Operations" (DRACO), aims to develop a nuclear-thermal propulsion system, which would, in theory, deliver a high-thrust, high-efficiency spacecraft able to move large amounts of payload quickly. DRACO, however, is hampered by the safety and policy challenges of working with nuclear reactors. (The term "cislunar" refers to the vast area of space between the Earth and the Moon).

SCORPIUS addresses some of these conventional challenges by offering capabilities similar to DRACO, but without using radioactive material to achieve its high-performance level of propulsion.

Thus, SCORPIUS is intended to free up significant mass for larger spacecraft payloads, allowing the USSF to move assets through cislunar space in a much more responsive timeframe. SCORPIUS could potentially enable missions such as patrolling the Earth-Moon "Lagrange points" (defined as areas of open space in which objects remain stationary), ferrying satellites between low Earth orbit and the geosynchronous belt, or removing space debris from strategic Earth orbits. During the Phase I effort, RSA and its team worked with the USSF to identify missions of interest and ways to refine the SCORPIUS concept to improve propellant storability and lifetime.

The novel design of SCORPIUS hinges on origami unfolding solar concentrators, and a "ThermaSat+" solar thermal propulsion system now under development by Howe Industries, a SCORPIUS project partner with RSA. SCORPIUS uses the large solar concentrators to heat up the tungsten block of the ThermaSat+ system, melting encapsulated boron in the tungsten and storing significant amounts of energy in the phase change from solid to liquid. Once fully charged, the tungsten block vaporizes propellant at temperatures hot enough to melt steel and generates enough thrust to perform an impulsive burn.

SCORPIUS will also harvest electrical energy from the solar concentrators to power an electric ion engine. This bi-modal capability allows SCORPIUS to further conserve propellant during non-urgent maneuvers, and to easily make small station-keeping maneuvers without heating up the tungsten block.

For an animated rendering of the craft, see the following YouTube link. (Media please note – Rhea Space Activity has authorized this video for public distribution):

Beau Rideout, an Aerospace Engineer at RSA, commented on the importance of using a bi-modal propulsion system in deep space: "Developing a high-performance propulsion system that can operate in high-thrust/low-impulse and low-thrust/high-impulse modes allows for a wide variety of flight envelopes in cislunar space. Additionally, multiple uses for the unfolding origami-type solar-reflector allows for a complete rethink of satellite comms and power systems. In many respects, this system promises to offer multiple applications and breakthroughs for satellites and spacecraft far into the future."

Troy Howe, president of Howe Industries, described SCORPIUS as a new twist on an old concept. "Solar thermal propulsion has been extensively studied since the 1990s but was considered to be too underpowered to be of much use at the time. With SCORPIUS, we can use high-thrust maneuvers instead of the old low-thrust, continuous burn concept, and take advantage of the Earth-Moon gravitational environment. By building on well-established techniques, we can provide an innovative new way of approaching spaceflight."

David J. Strobel, Executive Chairman at Space Micro, another RSA partner on the project, said: "Space Micro is very pleased to be on the RSA team, to which we are contributing our space communications and avionics expertise for the SCORPIUS spacecraft, including propulsion controller electronics, space processing and Command and Data-Handling, software defined radios, and star tracker/cameras as required for space operations."

RSA now has the opportunity to participate in Customer Discovery with key USSF stakeholders, to compete for a Space Force Pitch Day Phase II award. RSA plans to develop a design reference mission for SCORPIUS to inform further development of the spacecraft, and to carry the project's momentum into the Phase II proposal, which will likely develop a novel high-performance propulsion system for USSF space domain awareness. RSA also plans to advance "constellation architecture" recommendations to demonstrate how such a new capability will fit into current U.S. defense practices, and the broader U.S. space environment.