Now 50 times as far from the Sun as Earth, History-Making Pluto Explorer Photographs Voyager 1’s Location from the Kuiper Belt

In the weeks following its launch in early 2006, when NASA’s New Horizons was still close to home, it took just minutes to transmit a command to the spacecraft, and hear back that the onboard computer received and was ready to carry out the instructions.

Scale of the Solar System

Here’s one way to imagine just how far 50 AU is: Think of the solar system laid out on a neighborhood street; the Sun is one house to the left of “home” (or Earth), Mars would be the next house to the right, and Jupiter would be just four houses to the right. New Horizons would be 50 houses down the street, 17 houses beyond Pluto!

As New Horizons crossed the solar system, and its distance from Earth jumped from millions to billions of miles, that time between contacts grew from a few minutes to several hours. And on April 18 at 12:42 UTC (or April 17 at 8:42 p.m. EDT), New Horizons will reach a rare deep-space milepost -- 50 astronomical units from the Sun, or 50 times farther from the Sun than Earth is.

New Horizons is just the fifth spacecraft to reach this great distance, following the legendary Voyagers 1 and 2 and their predecessors, Pioneers 10 and 11. It’s almost 5 billion miles (7.5 billion kilometers) away; a remote region where one of those radioed commands, even traveling at the speed of light, needs seven hours to reach the far flung spacecraft. Then add seven more hours before its control team on Earth finds out if the message was received.

“It’s hard to imagine something so far away,” said Alice Bowman, the New Horizons mission operations manager at the Johns Hopkins Applied Physics Laboratory in Laurel, Maryland. “One thing that makes this distance tangible is how long it takes for us on Earth to confirm that the spacecraft received our instructions. This went from almost instantaneous to now being on the order of 14 hours. It makes the extreme distance real.”

To mark the occasion, New Horizons recently photographed the star field where one of its long-distance cousins, Voyager 1, appears from New Horizons’ unique perch in the Kuiper Belt. Never before has a spacecraft in the Kuiper Belt photographed the location of an even more distant spacecraft, now in interstellar space. Although Voyager 1 is far too faint to be seen directly in the image, its location is known precisely due to NASA’s radio tracking. 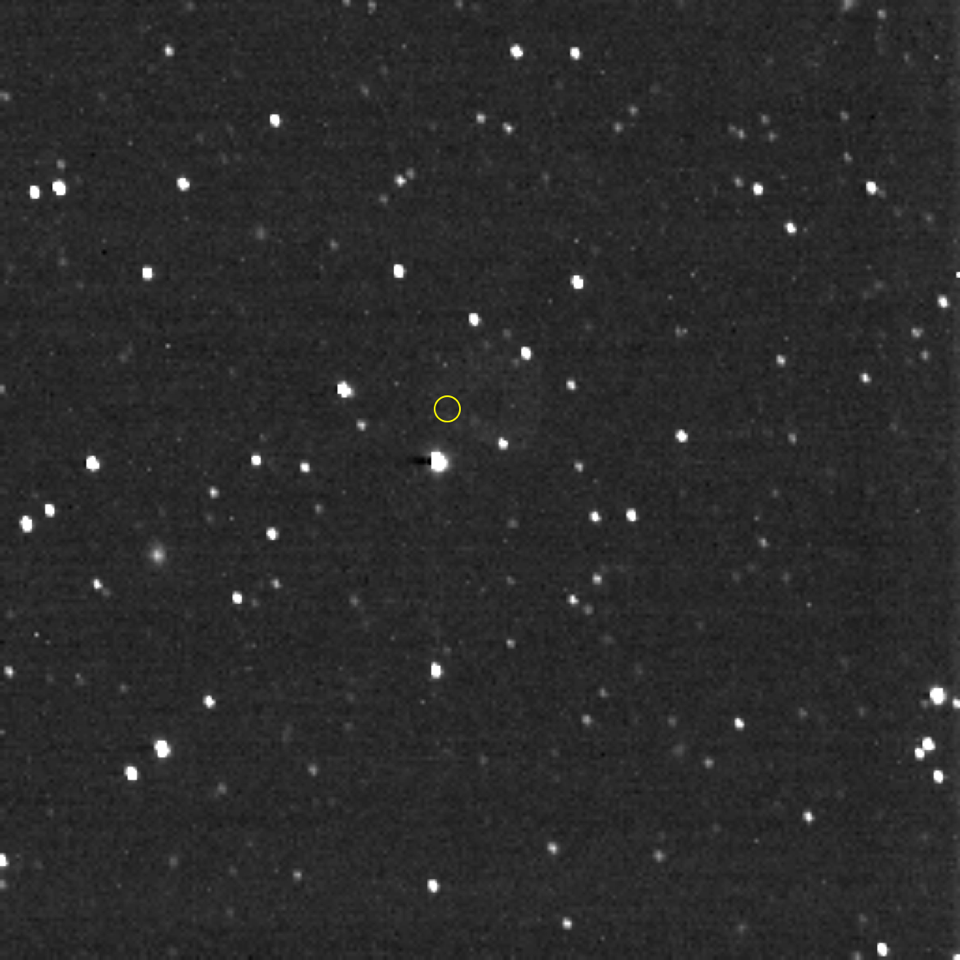 Hello, Voyager! From the distant Kuiper Belt at the solar system’s frontier, on Christmas Day, Dec. 25, 2020, NASA’s New Horizons spacecraft pointed its Long Range Reconnaissance Imager in the direction of the Voyager 1 spacecraft, whose location is marked with the yellow circle. Voyager 1, the farthest human-made object and first spacecraft to actually leave the solar system, is more than 152 astronomical units (AU) from the Sun—about 14.1 billion miles or 22.9 billion kilometers—and was 11.2 billion miles (18 billion kilometers) from New Horizons when this image was taken. Voyager 1 itself is about 1 trillion times too faint to be visible in this image. Most of the objects in the image are stars, but several of them, with a fuzzy appearance, are distant galaxies. New Horizons reaches the 50 AU mark on April 18, 2021, and will join Voyagers 1 and 2 in interstellar space in the 2040s.
Credits: NASA/Johns Hopkins APL/Southwest Research Institute

“Looking back at the flight of New Horizons from Earth to 50 AU almost seems in some way like a dream,” he continued. “Flying a spacecraft across our entire solar system to explore Pluto and the Kuiper Belt had never been done before New Horizons. Most of us on the team have been a part of this mission since it was just an idea, and during that time our kids have grown up, and our parents, and we ourselves, have grown older. But most importantly, we made many scientific discoveries, inspired countless STEM careers, and even made a little history.”

New Horizons was practically designed to make history. Dispatched at 36,400 miles per hour (58,500 kilometers per hour) on Jan. 19, 2006, New Horizons was and is still the fastest human-made object ever launched from Earth. Its gravity-assist flyby of Jupiter in February 2007 not only shaved about three years from its voyage to Pluto, but allowed it to make the best views ever of Jupiter’s faint ring, and capture the first movie of a volcano erupting anywhere in the solar system except Earth.

New Horizons successfully pulled off the first exploration of the Pluto system in July 2015, followed by the farthest flyby in history – and first close-up look at a Kuiper Belt object (KBO) -- with its flight past Arrokoth on New Year’s day 2019. From its unique perch in the Kuiper Belt, New Horizons is making observations that can’t be made from anywhere else; even the stars look different from the spacecraft’s point of view. 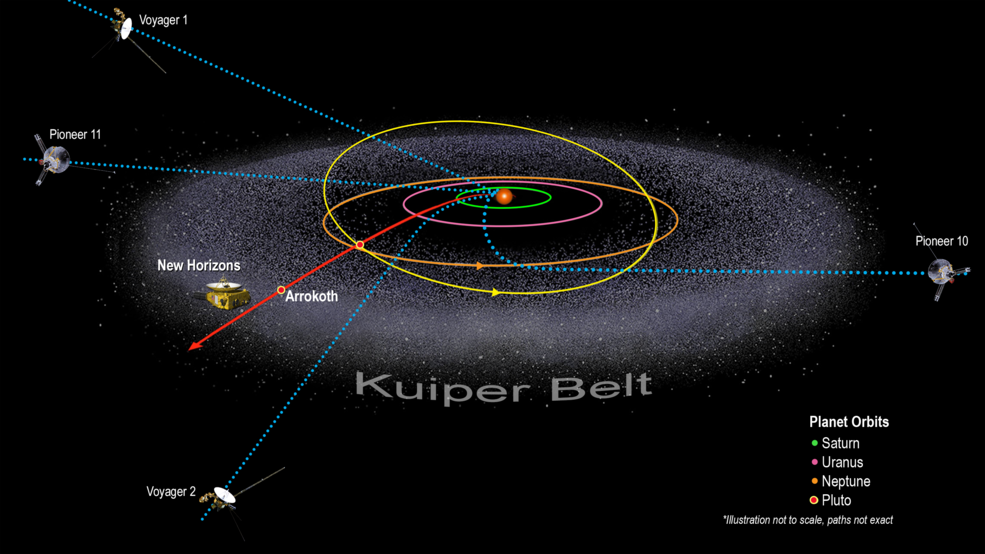 Currently exploring the Kuiper Belt beyond Pluto, New Horizons is just one of five spacecraft to reach 50 astronomical units – 50 times the distance between the Sun and Earth – on its way out of the solar system and, eventually, into interstellar space.
Credits: NASA/Johns Hopkins APL/Southwest Research Institute

New Horizons team members use giant telescopes like the Japanese Subaru observatory to scan the skies for another potential (and long-shot) KBO flyby target, New Horizons itself remains healthy, collecting data on the solar wind and space environment in the Kuiper Belt, other Kuiper Belt objects, and distant planets like Uranus and Neptune. This summer, the mission team will transmit a software upgrade to boost New Horizons’ scientific capabilities. For future exploration, the spacecraft’s nuclear battery should provide enough power to keep New Horizons operating until the late-2030s.