Scientists from Japan and NASA have confirmed the presence in meteorites of a key organic molecule which may have been used to build other organic molecules, including some used by life. The discovery validates theories of the formation of organic compounds in extraterrestrial environments.

The chemistry of life runs on organic compounds, molecules containing carbon and hydrogen, which also may include oxygen, nitrogen and other elements. While commonly associated with life, organic molecules also can be created by non-biological processes and are not necessarily indicators of life. An enduring mystery regarding the origin of life is how biology could have arisen from non-biological chemical processes, called prebiotic chemistry. Organic molecules from meteorites may be one of the sources of organic compounds that led to the emergence of life on Earth.

Photo of a piece of the Murchison meteorite that was used in this study.
Credits: NASA

Associate Professor Yasuhiro Oba from Hokkaido University, Japan, led an international team of researchers who discovered the presence of a prebiotic organic molecule called hexamethylenetetramine (HMT) in three different carbon-rich meteorites. Their discovery validates models and theories that propose HMT as an important molecule in the formation of organic compounds in interstellar environments.

“HMT is a key piece of a puzzle which draws the whole picture of chemical evolution in space,” said Oba, lead author of a paper about the research published December 7 in the journal Nature Communications. “To explain the formation of meteoritic organic molecules such as amino acids and sugars, two easily vaporized (volatile) molecules, formaldehyde and ammonia, are necessary in asteroids, the parent bodies of many meteorites. However, since they are easily lost from asteroidal environments due to their high volatility, scientists question how enough could have been available to build the meteoritic organic molecules being found. HMT does not vaporize even at room temperature, and it can produce both molecules if it is heated with liquid water inside asteroids. Finding HMT in meteorites confirms the hypothesis that it is a stable source for ammonia and formaldehyde in asteroids.”

Early in the solar system’s history, many asteroids could have been heated by collisions or the decay of radioactive elements. If some asteroids were warm enough and had liquid water, HMT could have broken down to provide building blocks such as formaldehyde and ammonia that in turn reacted to make other important biological molecules which have been found in meteorites, including amino acids. Some types of amino acids are used by life to make proteins, which are used to build structures like hair and nails, or to speed up or regulate chemical reactions.

“These results shed light on the various ways amino acids can form in extraterrestrial environments,” said Jason Dworkin, a co-author of the paper at NASA’s Goddard Space Flight Center in Greenbelt, Maryland. “This can be explored further when comparing the samples from Japan’s Hayabusa2 and NASA’s OSIRIS-REx missions. These spacecraft collected material from asteroids with what appears to be different histories of liquid water. If there is a mission to return a sample from a comet nucleus someday, perhaps we can see if there is a connection between HMT in comets and asteroids.”

While the diversity of organic compounds in meteorites is well-documented, many questions remain about the processes by which these compounds were formed. The most important meteorites in this area of research are carbonaceous chondrites, stony meteorites that contain high percentages of water and organic compounds. Experimental models have shown that a combination of water, ammonia and methanol, when subjected to photochemical and thermal conditions common in extraterrestrial environments, give rise to a number of organic compounds, the most common of which is HMT. Interstellar ice is rich in methanol. Hypothetically, HMT should be common in water-containing extraterrestrial materials, but, until this study, it had not been detected.

HMT is likely to break apart when exposed to processes commonly used in the analysis of organic compounds in meteorites, and therefore, may not have been detected in other studies even though it was present. The scientists developed a method that specifically extracted HMT from meteorites with minimal breakdown. This method allowed them to isolate significant quantities of HMT and HMT derivatives from the meteorites Murchison, Murray and Tagish Lake. 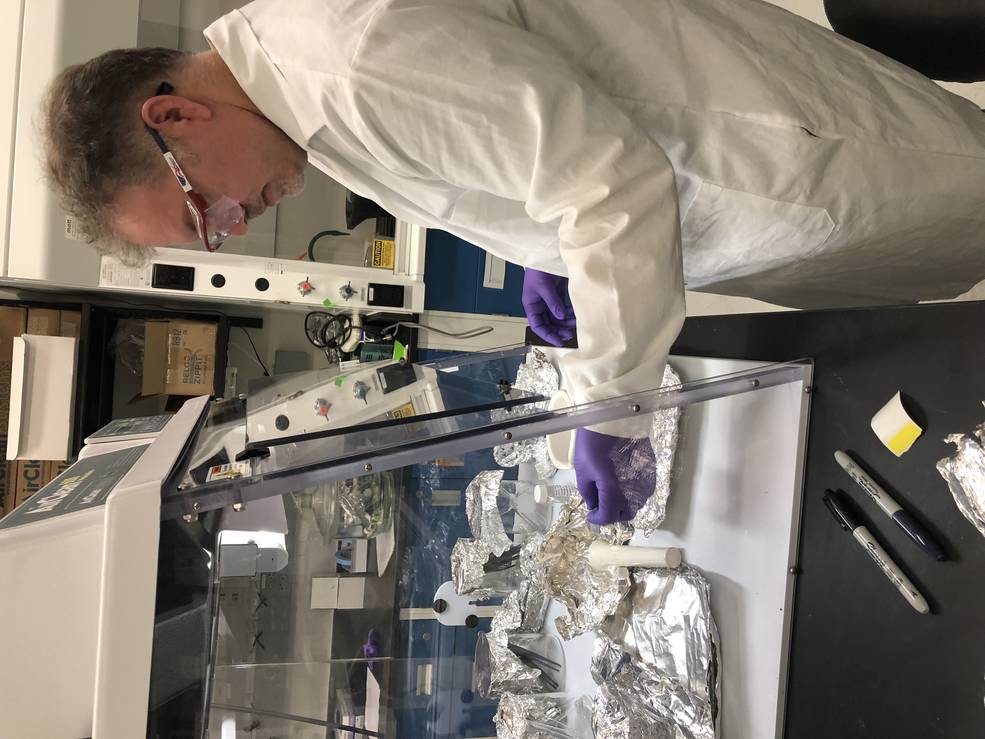 Since Earth has abundant life, the researchers had to be confident that the HMT found in the meteorites was in fact extraterrestrial, and not just from contamination by terrestrial life. “The Murchison fragment used in this study was from the Chicago Field Museum that had been stored for many years inside a sealed container, and is the least contaminated and most pristine piece of Murchison we have ever studied for amino acids, giving us more confidence that the HMT detected in this meteorite is in fact extraterrestrial in origin,” said Daniel Glavin of NASA Goddard, a co-author on the study.

Yasuhiro Oba is part of the Astrophysical Chemistry/Ice & Planetary Science Group at the Institute of Low Temperature Science, where he studies chemical evolution of compounds at scales from molecular clouds to planetary systems.