One of the first things people want to know before taking a trip is what the weather will be like wherever they are headed. For Artemis astronauts traveling on missions to the Moon, two space weather instrument suites, NASA’s HERMES and ESA’s ERSA, will provide an early forecast. Weather in this case means energized, subatomic particles and electromagnetic fields hurtling through the solar system.

The instrument suites, named after two of Artemis’s half-siblings in Greek Mythology – Ersa, the goddess of dew, and Hermes, the messenger of the Olympian gods – will be pre-loaded on the Gateway before the first two components are launched: the Power and Propulsion Element and the Habitation and Logistics Outpost. The two instrument suites will begin monitoring the lunar radiation environment and return data before crews begin to arrive.

Artist's concept of the Gateway Power and Propulsion Element, or PPE, and Habitation and Logistics Outpost, or HALO, in orbit around the Moon. The gold box on the right side of the image depicts the HERMES payload. The ERSA payload is the silver box just below it.
Credits: NASA

Reinforcing decades of agency collaboration in space, NASA and the European Space Agency (ESA) are each building one of the instruments suites to monitor deep space weather and report data back to Earth. Each agency was able to take advantage of this early opportunity to conduct science from Gateway – first realized in late 2019 – by capitalizing on technologies that were mature enough to be delivered by mid-2022. The two complementary mini weather stations will split up the work, with ERSA monitoring space radiation at higher energies with a focus on astronaut protection, while HERMES monitors lower energies critical to scientific investigations.

Swimming in a solar sea 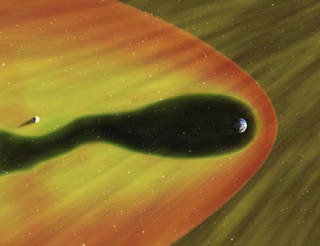 Artist rendition showing the flapping of the magnetosphere (dark region), which leaves the Moon exposed to energized particles in the solar wind (yellow-orange). Gateway’s path around the Moon, the near-rectilinear halo orbit, will pass briefly through the elongated tail of Earth’s magnetosphere.
Credits: E. Masongsong, UCLA EPSS.

The night sky may appear dark and empty, but we are swimming through an open sea of high energy particles writhing with electric and magnetic fields. Electrons and ions zoom by at over one million miles per hour, with occasional blasts from solar storms pushing them to near light-speed. This stream of particles, or tiny bits of Sun, is the solar wind.

Earth’s magnetic field, which extends approximately 60,000 miles into space, protects us and our astronaut crew closer to home aboard the International Space Station. As the Moon orbits Earth, it passes in and out of Earth’s long magnetotail, the part of Earth’s magnetic field blown back by the solar wind like a windsock. Gateway, however, will spend only a quarter of its time within this magnetic field, so it provides a research opportunity to directly measure the solar wind and radiation from the Sun. 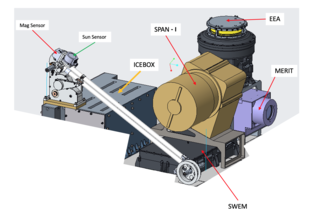 A model diagram of NASA's HERMES instrument suite. The four instruments are shown along with the ICE BOX, or Instrument Control Electronics Box, and SWEM, or Solar Wind electrons alphas and protons Electronics Module.
Credits: NASA

HERMES, short for Heliophysics Environmental and Radiation Measurement Experiment Suite, will glimpse what’s happening deep in the magnetotail, allowing NASA to compare its observations to two of the five THEMIS spacecraft, a pair of Moon-orbiters that carry some similar instruments as HERMES. The ability to collect data simultaneously from the three instrument suites in different locations will provide a rare opportunity to reconstruct solar wind behavior as it changes over time.

HERMES will measure lower energy radiation that will be considered for astronaut safety where applicable, but its primary goal is scientific.

“The deep space environment is harsh, but by understanding space weather and solar activity we can properly mitigate risks to our astronauts and hardware,” said Jacob Bleacher, chief exploration scientist in the Human Exploration and Operations Mission Directorate at NASA headquarters in Washington. “HERMES and ERSA are a perfect example of the synergy between science and exploration.”

HERMES is led by NASA’s Goddard Space Flight Center, in Greenbelt, Maryland. It consists of four instruments mounted together on a platform: A magnetometer, which measures the magnetic fields around Gateway, the Miniaturized Electron pRoton Telescope, or MERiT, which measures ions and electrons; the Electron Electrostatic Analyzer, or EEA, which measures the lower energy electrons that make up most of the solar wind, and the Solar Probe Analyzer for Ions, or SPAN-I, which measures protons and ions including oxygen. The magnetometer, MERiT and EEA are provided by Goddard; SPAN-I is built at the University of California, Berkeley.

ERSA, or European Radiation Sensors Array, will study the solar wind’s effects on astronauts and their equipment. Equipped with five instruments, ERSA measures energetic particles from the Sun, galactic cosmic rays, neutrons, ions, and magnetic fields around the Gateway. Measuring these particles can tell us about the physics of radiation in the solar system, and understand the risks posed by radiation to human spacefarers and their hardware.

“Understanding the changing radiation environment around the Moon and at the Gateway is important if we are to understand the potential dangers astronauts will face and how to address them. It also helps us to understand and predict space weather across the Earth-Moon system,” said James Carpenter, ESA’s Exploration Science Coordinator.

Gateway's path will follow a near-rectilinear halo orbit, also known as an angelic halo orbit, around the Moon.
Credits: ESA

Included in the suite is the Influence sur les Composants Avancés des Radiations de l'Espace, or ICARE-NG instrument, which measures ionizing radiation that can create brief spikes in voltage that can make electronics short-circuit. Another instrument, the European Active Dosimeter, measures the energy that would be deposited by radiation in living tissue to understand human radiation exposure.

The measurements from both HERMES and ERSA are made at time of impact, once the radiation has already arrived. But in the long term, the measurements will help NASA and ESA improve their models of space weather to better predict when such radiation could be on its way from the Sun, enabling better advanced warnings in the future.

Gateway is a vital part of the Artemis program. Through Artemis, NASA and its partners will learn to live, work, and conduct science on and around the Moon, creating a sustained human-robotic presence at Earth’s nearest neighbor. At the Moon, we will learn how to thrive on other worlds, preparing humanity for the next great voyage to Mars.