The Long March 5B had an eventful homecoming

On Monday, a massive, out-of-control Chinese rocket fell out of the sky off the west coast of Africa, becoming one of the largest human-made objects ever to make an uncontrolled descent to Earth from space. At first, the rocket seemed to harmlessly slam into the Atlantic Ocean. But now it seems that some pieces of debris may have hit solid ground, according to local reports from Côte d’Ivoire describing metallic objects that apparently fell from the sky.

The rocket that just made a chaotic return to Earth was the core of China’s powerful Long March 5B rocket, which launched on May 5th. The mission marked the first time China had launched this particular rocket variant to space. Ultimately, the mission was a success, allowing China to test this massive new vehicle and put an experimental new spacecraft into orbit.

THE LONG MARCH 5B IS A TRULY MASSIVE ROCKET

However, once the launch was over, the core of the Long March 5B didn’t fall back to Earth, as most rocket cores do once they’ve completed a mission. Instead, the core made it into a very low orbit and stayed in space for the last week. Its orbit was pretty unstable, though, and it was predicted to fall to Earth early this week.

The whole ordeal was a tad scary since the Long March 5B is a truly massive rocket. When smaller-sized vehicles fall out of orbit, they will usually completely burn up in Earth’s atmosphere. But more massive objects like this rocket have a higher chance of partially surviving reentry. Normally, if a country or company puts a particularly heavy object into orbit like this one, they have a detailed plan in place for how to bring the thing down safely. China hasn’t been clear about its plans for the rocket.

“Did they perhaps have a plan to de-orbit it that went wrong?” Jonathan McDowell, an astrophysicist at Harvard and satellite tracker, tells The Verge. “The Chinese have not discussed whether they had any plan of the sort, so therefore we’re forced to assume that they didn’t.” China also doesn’t have a very good track record of making sure its rockets don’t hurt people. Rather than launch over the ocean as the US does, China will often launch its rockets over land, prompting reports of rocket parts falling over populated areas.

At 21 metric tons, the core of the Long March 5B is way more massive than the 8-metric-ton Chinese space station Tiangong-1 that careened to Earth in 2018. In fact, the Long March 5B is the fifth most massive object to make an uncontrolled descent to Earth, according to McDowell. “This is the heaviest object to make an uncontrolled reentry since 1991,” he claims.

“THIS IS THE HEAVIEST OBJECT TO MAKE AN UNCONTROLLED REENTRY SINCE 1991.”

Adding to experts’ worries, the Long March 5B core took a rare and unexpected path over heavily populated areas on Earth during its final orbit. McDowell notes that the vehicle passed over both Los Angeles and New York City just before it entered the atmosphere over the Atlantic.

The Air Force’s 18th Space Control Squadron, which is responsible for tracking space objects, confirmed that the rocket reentered over the Atlantic at 11:33AM ET on Monday. Still, it looks like some parts of the falling rocket may have escaped the watery grave.

Pictures from Facebook and Twitter show what looks like a long metal pipe found by villagers in Mahounou in Côte d’Ivoire. There are no indications that anyone was hurt. There’s also no solid confirmation that the pipe came from the rocket. But after doing some sleuthing, McDowell says that locals reported loud sonic booms, flashes, and falling debris around the same time that the rocket would have passed over them. Plus, the village is right in line with the rocket’s path around Earth, so he says it’s possible some pieces made it inland.

“When you have a big chunk of metal screaming through the upper atmosphere in a particular direction at a particular time, and you get reports of things falling out of the sky at that location, at that time, it’s not a big leap to connect them,” he says.

“THEY’RE PLANNING A LOT OF LAUNCHES OF THIS THING.”

Of course, it’s still very early, and it’s unclear exactly what can be done about this if the pieces are, indeed, from the Long March 5B. The United Nations has a treaty known as the Space Liability Convention, an agreement about who is held internationally liable if a falling space object injures someone or harms a place on Earth. The UN came up with the treaty in 1972 after a Soviet satellite crashed into Canada. China acceded to the treaty in 1988, but Côte d’Ivoire isn’t part of it. So even if the pieces are from the rocket, it’s unclear if China will have to pay up in some way.

Either way, space trackers aren’t pleased, and McDowell worries about what this means for the future. “They’re planning a lot of launches of this thing to assemble their new space station, and so that’s going to be a lot of these objects reentering a few days after launch,” says McDowell. “And that’s not good.”

NASA Administrator Jim Bridenstine took China to task today after debris from the reentry of the core stage of its Long March-5B rocket fell in Africa.  Calling it “really dangerous,” he used it as an example of why the Artemis Accords unveiled today are necessary to ensure safe operations on the Moon.  In a statement, he said space exploration should “inspire hope and wonder, not fear and danger.”

On May 5, China launched a new version of its Long March-5 rocket, the LM-5B.  The LM-5 family is the largest in China’s fleet, roughly comparable to a U.S. Delta IV Heavy. Unlike its LM-5 cousin, the LM-5B does not have a second stage.  Instead, it has a much larger fairing to accommodate big payloads.

This was a test launch of a prototype crew spacecraft.  No one was aboard.  When operational, the spacecraft will be used to ferry crews to a new multi-modular China Space Station (CSS) China plans to construct in low Earth orbit between now and 2022.  All three CSS core modules will be launched by the LM-5B.  China also will use the LM-5B to launch robotic spacecraft to the Moon and Mars this year — the Chang’e-5 lunar sample return mission and the Tianwen-1 Mars orbiter/lander/rover.  More robotic missions and someday human trips to the Moon are expected to follow.

The LM-5B first stage, or core stage, augmented by four strap-on boosters that drop away soon after launch, does the lifting and reaches orbit along with the payload.  After a few days it makes an uncontrolled reentry.  In this case, it  remained in orbit until May 11.  Since there was no way to control its descent, it randomly fell over the Atlantic Ocean.

Pieces of space debris make uncontrolled reentries all the time.  They only make the news if they land in populated areas, which is rare since Earth’s surface is 70 percent covered by oceans.  It initially appeared that is just what happened.  The U.S. 18th Space Control Squadron announced its reentry coordinates using its Chinese initials, CZ (for Chang Zheng) instead of the English Long March.  R/B means rocket body.

172 people are talking about this

But soon photographs been popping up on social media of residents of Cote d’Ivoire (Ivory Coast) standing next to what experts concluded must be from the LM-5B core stage.

Reports of a 12-m-long object crashing into the village of Mahounou in Cote d'Ivoire. It's directly on the CZ-5B reentry track, 2100 km downrange from the Space-Track reentry location. Possible that part of the stage could have sliced through the atmo that far (photo: Aminata24) 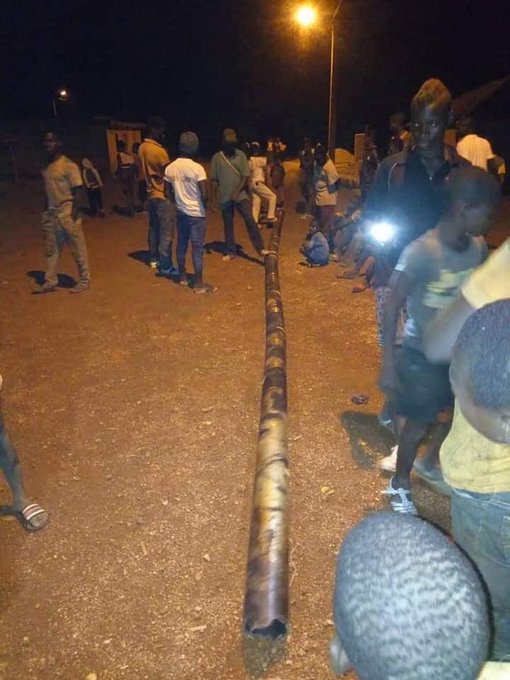 Reports of a 12-m-long object crashing into the village of Mahounou in Cote d'Ivoire. It's directly on the CZ-5B reentry track, 2100 km downrange from the Space-Track reentry location. Possible that part of the stage could have sliced through the atmo that far (photo: Aminata24) pic.twitter.com/yMuyMFLfsv

Sources in Cote d'Ivoire, per @zolgafolDaniel, confirm the objects crashed in the 1530-1600 UTC timeframe, consistent with them being debris from CZ-5B-Y1. Impressive how far downrange debris can get at 28000 km/hr!

30 people are talking about this

Updated plot of the reentry track, with the portion from atmosphere entry (per SpaceTrack) to debris impact in yellow. I measure the length of this portion as 2200 km. 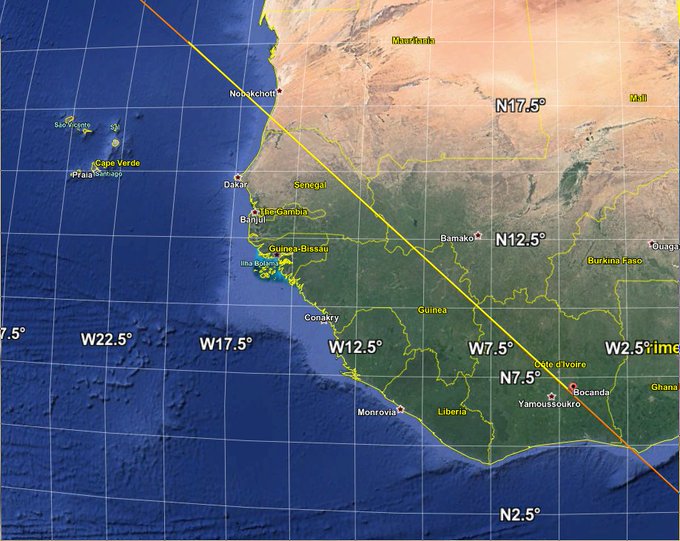 50 people are talking about this

The big concern is that this is just the first launch of the LM-5B. The question becomes whether the populations of Earth that lie beneath the trajectory of LM-5B core stages will be at risk every time it is launched or if China will take steps to mitigate the risk.

The U.N. Committee on Peaceful Uses of Outer Space, of which China is a member, published a set of mitigation guidelines in 2010.

Within its own borders, China has shown a rather cavalier attitude towards rocket stages and other debris that fall on villages. China space expert Andrew Jones has posted photographs and videos on his Twitter feed (@AL_FL).

Rocket debris near a town in Guizhou province following the Long March 3B launch of Apstar-6C satellite on May 3. 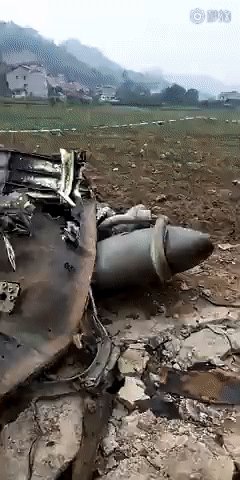 140 people are talking about this

This is the aftermath downrange following a Chinese Long March 3B launch from Xichang early Saturday. And that yellow smoke is very toxic hypergolic propellant. Source: https://weibo.com/3279752321/Ihy1liV5Y?refer_flag=1001030103_ … 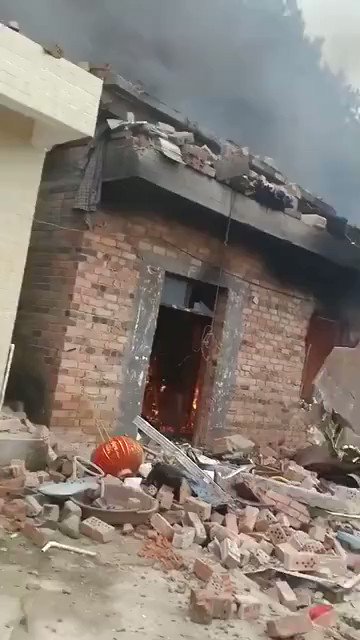 816 people are talking about this

Asked by @SciGuySpace if China has indicated this was just a one-time event, Jones replied that a “semi-official outlet  basically said: ‘what’s the problem? It’s normal.'”

Have they said anything yet about whether the LM5B debris is a one-off thing, or something we can expect with future launches in that configuration?

Nope. Foreign Ministry spokesperson had no info, referred them to relevant orgs (good luck with that). One semi-official outlet basically said: 'what's the problem? It's normal'.

Those had a mass of about 8.6 Metric Tons.  The LM-5B core stage was more than twice that.

Bridenstine raised the LM-5B debris today in the context of NASA’s release of the Artemis Accords, a set of principles the United States is asking international partners to adopt if they want to join the Artemis program to return astronauts to the Moon.  One is to act responsibly with regard to orbital debris and spacecraft disposal.

During a meeting of the NASA Advisory Council’s Regulatory and Policy Committee, he called the reentry “really dangerous.”  He also issued a statement on how it underscores the need for an agreement like the Artemis Accords.

“The empty core stage of the Long March-5B, weighing nearly 20 tons, was in an uncontrolled freefall along a path that carried it over Los Angeles and other densely populated areas.  As a matter of fact, had this spent rocket stage, which is the largest uncontrolled object to fall from low-Earth orbit in almost 30 years, reentered earlier, it could have hit New York.  Two villages in Cote d’Ivoire have reported finding what they believe to be debris from the fallen rocket stage.  I can think of no better example of why we need the Artemis Accords.  It’s vital for the U.S. to lead and establish norms of behavior against such irresponsible activities.  Space exploration should inspire hope and wonder, not fear and danger.” — Jim Bridenstine