DENVER, Aug. 28, 2018 /PRNewswire/ -- Technicians have completed construction on the spacecraft capsule structure that will return astronauts to the Moon, and have successfully shipped the capsule to Florida for final assembly into a full spacecraft. The capsule structure, or pressure vessel, for NASA's Orion Exploration Mission-2 (EM-2) spacecraft was welded together over the last seven months by Lockheed Martin (NYSE: LMT) technicians and engineers at the NASA Michoud Assembly Facility near New Orleans.

Orion is the world's only exploration-class spaceship, and the EM-2 mission will be its first flight with astronauts on board, taking them farther into the solar system than ever before.

At the NASA Michoud Assembly Facility in Louisiana, Lockheed Martin technicians have completed construction of the first Orion capsule structure that will carry humans to deep space on Exploration Mission-2. Image courtesy of NASA.

"It's great to see the EM-2 capsule arrive just as we are completing the final assembly of the EM-1 crew module," said Mike Hawes, Lockheed Martin vice president and program manager for Orion. "We've learned a lot building the previous pressure vessels and spacecraft and the EM-2 spacecraft will be the most capable, cost-effective and efficient one we've built."

Orion's pressure vessel is made from seven large, machined aluminum alloy pieces that are welded together to produce a strong, light-weight, air-tight capsule. It was designed specifically to withstand the harsh and demanding environment of deep space travel while keeping the crew safe and productive.

"We're all taking extra care with this build and assembly, knowing that this spaceship is going to take astronauts back to the Moon for the first time in four decades," said Matt Wallo, senior manager of Lockheed Martin Orion Production at Michoud. "It's amazing to think that, one day soon, the crew will watch the sun rise over the lunar horizon through the windows of this pressure vessel. We're all humbled and proud to be doing our part for the future of exploration."

The capsule was shipped over the road from New Orleans to the Kennedy Space Center, arriving on Friday, Aug. 24. Now in the Neil Armstrong Operations and Checkout Building, Lockheed Martin technicians will immediately start assembly and integration on the EM-2 crew module.

The three main orange and white parachutes help a test version of NASA's Orion spacecraft safely descend to the ground in Arizona. On Sept. 12, NASA engineers will test the Orion parachute system at the U.S. Army Proving Ground in Yuma for the final time to qualify them for missions with astronauts.
Credits: NASA/James Blair
-

NASA is inviting media to view the final test of the Orion spacecraft’s parachute system on Wednesday, Sept. 12, at the U.S. Army’s Yuma Proving Ground in Arizona. This test is the last in a series of eight to qualify the parachutes for crewed Orion missions to the Moon and beyond.

Media will have the opportunity to view the test at the desert drop zone and participate in on-location interviews with Orion Program Manager Mark Kirasich, astronauts Randy Bresnik and Tracy Caldwell-Dyson, and key program officials. Media also will be able to take a close look at the engineering model used for the test.

The Orion test capsule will be dropped from an altitude of more than six miles to verify the spacecraft’s system of 11 parachutes, forward bay covers, cannon-like mortars and pyrotechnic devices successfully work in sequence to slow the capsule’s descent.

To date, tests have evaluated Orion’s parachute performance during normal landing sequences, as well as several failure scenarios, and a variety of potential environmental and weather conditions to ensure astronauts can return safely from deep space missions.

Orion parachute engineers also have provided considerable insight and data to NASA’s Commercial Crew Program partners. NASA has improved computer modeling of how the system works in various scenarios and helped partner companies understand certain elements of parachute systems. In some cases, NASA’s work has provided enough information for the partners to reduce the need for some developmental parachute tests.

The parachutes for Orion’s upcoming uncrewed flight test on NASA’s Space Launch System rocket, Exploration Mission-1, already are loaded into the capsule at the agency’s Kennedy Space Center in Florida. 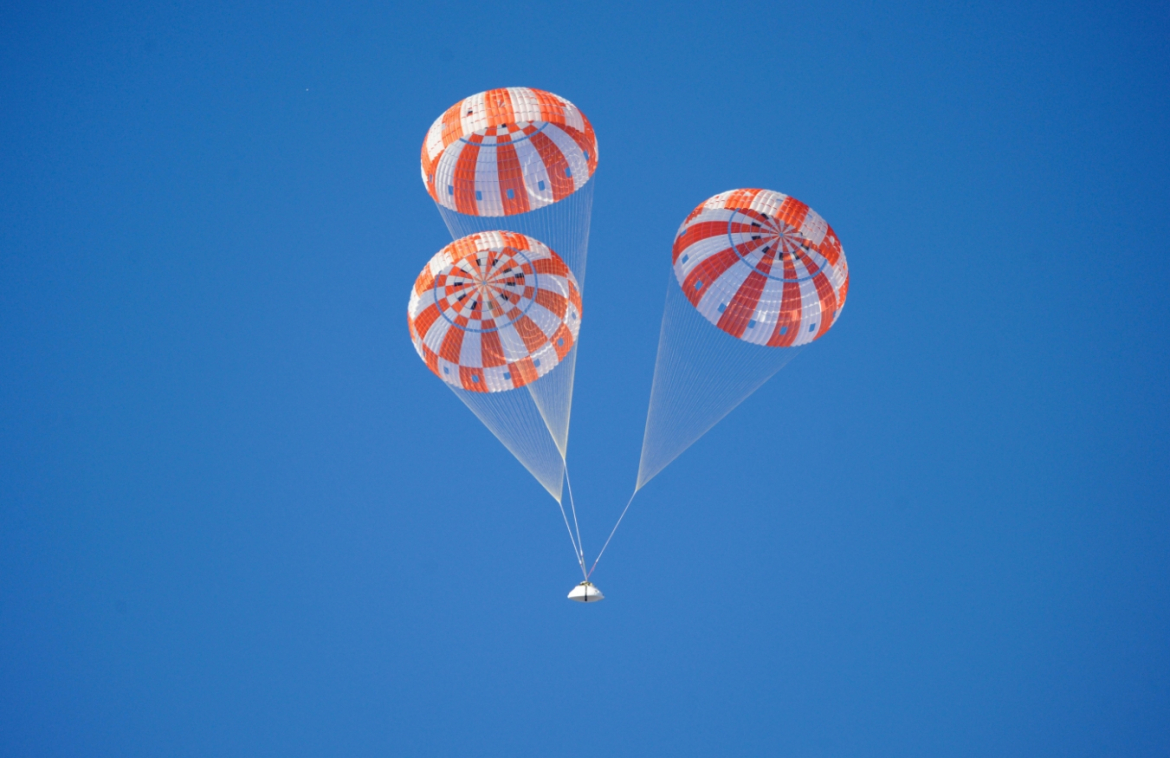 The Orion Program has concluded its drop test series for the spacecraft’s parachute system, with a successful return to terra firma on Wednesday. The three chutes will allow Orion to conclude its mission with a gentle splashdown in the Pacific Ocean. Ensuring the system was safe, including during the loss of a chute, has been the main goal of the test series that has been ongoing for around a decade.

The test series – conducted in Yuma’s proving grounds for the US Army in Arizona – has mainly used a boilerplate Orion spacecraft dropped out of the back of a C-17 plane.

These tests have been conducted since the early days of the Constellation Program (CxP).

The tests use a Parachute Test Vehicle (PTV) system – better known as CPAS – that consists of numerous additional parachutes, required to drag the test vehicle out of the C-17 aircraft via a sledge or pallet system at altitudes ranging from 25,000 to 35,000 feet, providing the correct orientation, altitude and speed, whilst also allowing for the pallet to land safely on the ground under its own dedicated parachutes. 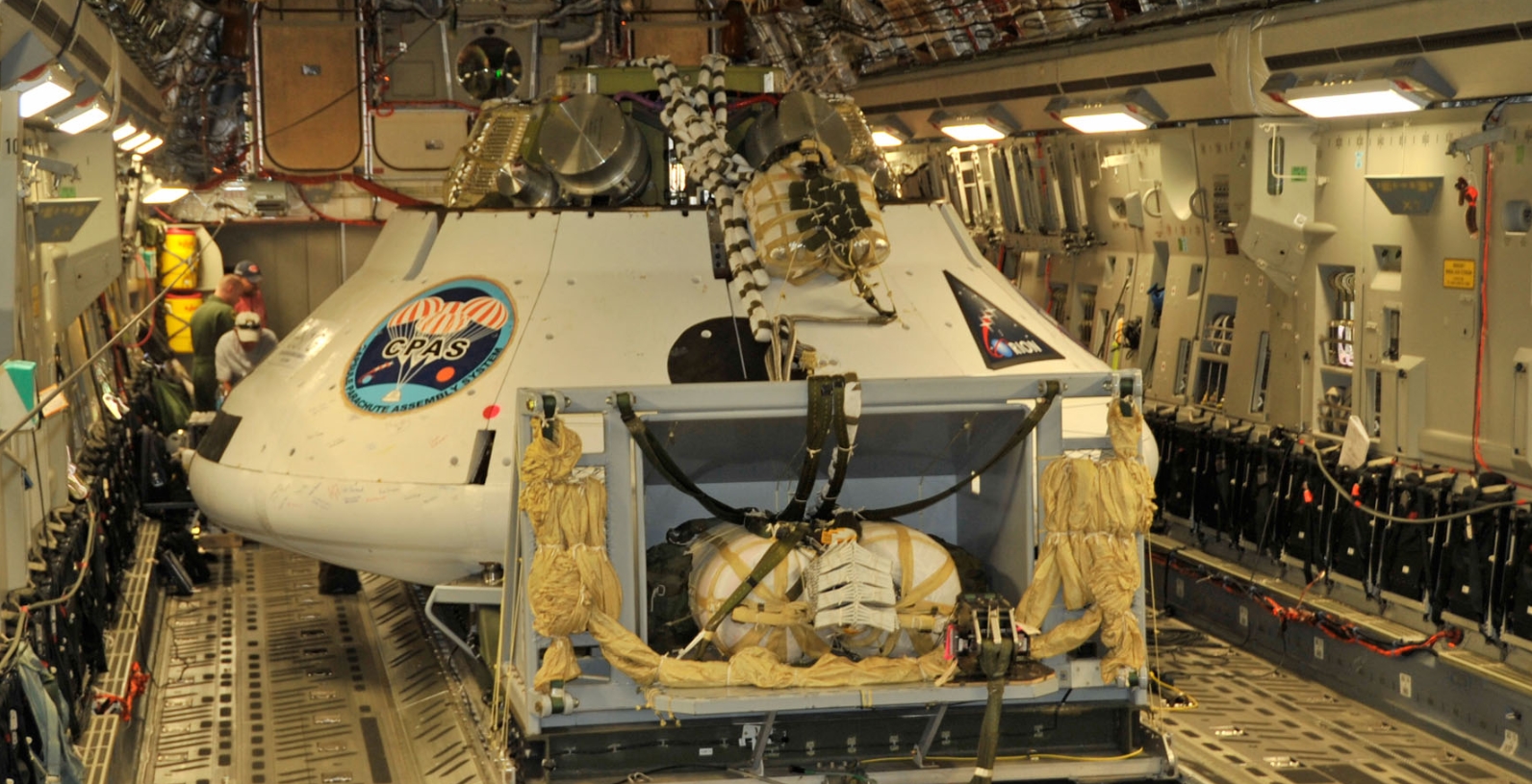 The test series has not been without its failures.

The Orion PTV (Parachute Test Vehicle – first generation) suffered a failure back in 2008 when the programmer chute failed to inflate after deployment, critically removing the requirement for the vehicle’s descent rate to be slowed down and to be correctly orientated for drogue chute deployment.

This failure resulted in the vehicle falling upside down at high speed. With the increased velocity, when the two drogue chutes deployed, they were ripped off almost immediately due to the higher loads.

The one remaining parachute valiantly remained attached but was obviously unable to stop the vehicle crashing to Earth at high speed on its own, resulting in the destruction of most of the test hardware. 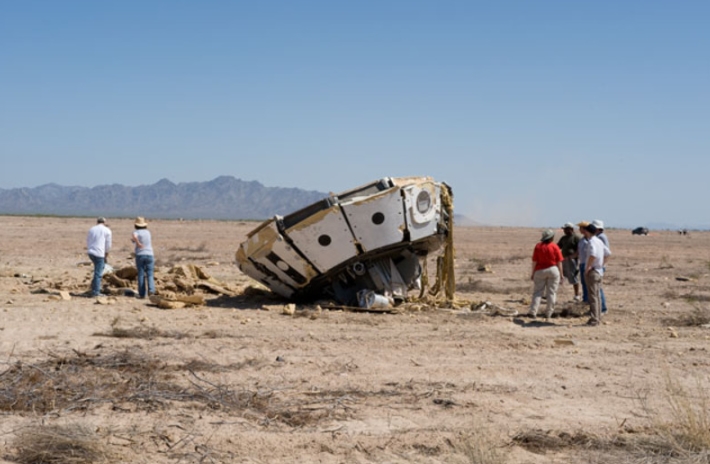 Another failure in 2010 was believed to be the fault of the pallet system itself, which allows the test vehicle to slide out of the back of the C-17.

The pallet apparently remained attached to the test vehicle, causing the duo to crash into the ground, again destroying most of the hardware.

The 2010 parachute test failure occurred during the period Orion was being canceled by President Obama’s FY2011 budget proposal, prior to being fully reinstated, primarily as a Beyond Earth Orbit (BEO) vehicle, by the 2010 Authorization Act.

Testing since then has proceeded with numerous successes, as Orion found her new role as an exploration vehicle, with objectives ranging from drop tests that examine how Orion’s wake – the disturbance of the airflow behind the vehicle – impacts the performance of the parachute system, through to examining the effects of one main parachute skipping the first reefing stage.

Tests on how Orion would cope during a return with only two of her three main parachutes deployed has been a major part of the test series. 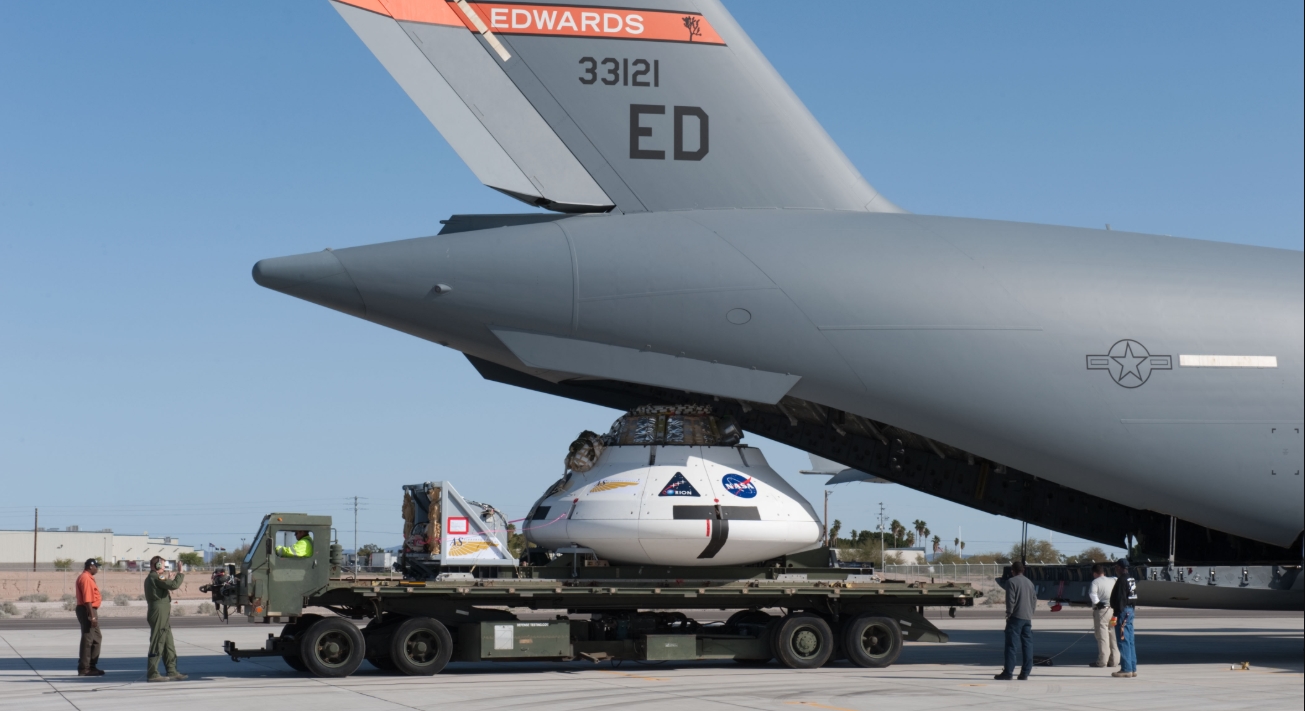 These tests have been classed as the “riskiest tests ever conducted by Orion” – however, they have been deemed a success and provided data to engineers that they will use to qualify Orion’s parachutes for missions with astronauts.

Notably, the system is designed to provide the End Of Mission (EOM) success to a crew’s trip into space, requiring a large amount of evaluation to ensure that goal – of bringing the crew to a safe landing in the ocean – is accomplished.

Some valuable data was gained via the successful mission of the Exploration Flight Test -1 (EFT-1) Orion in 2014. 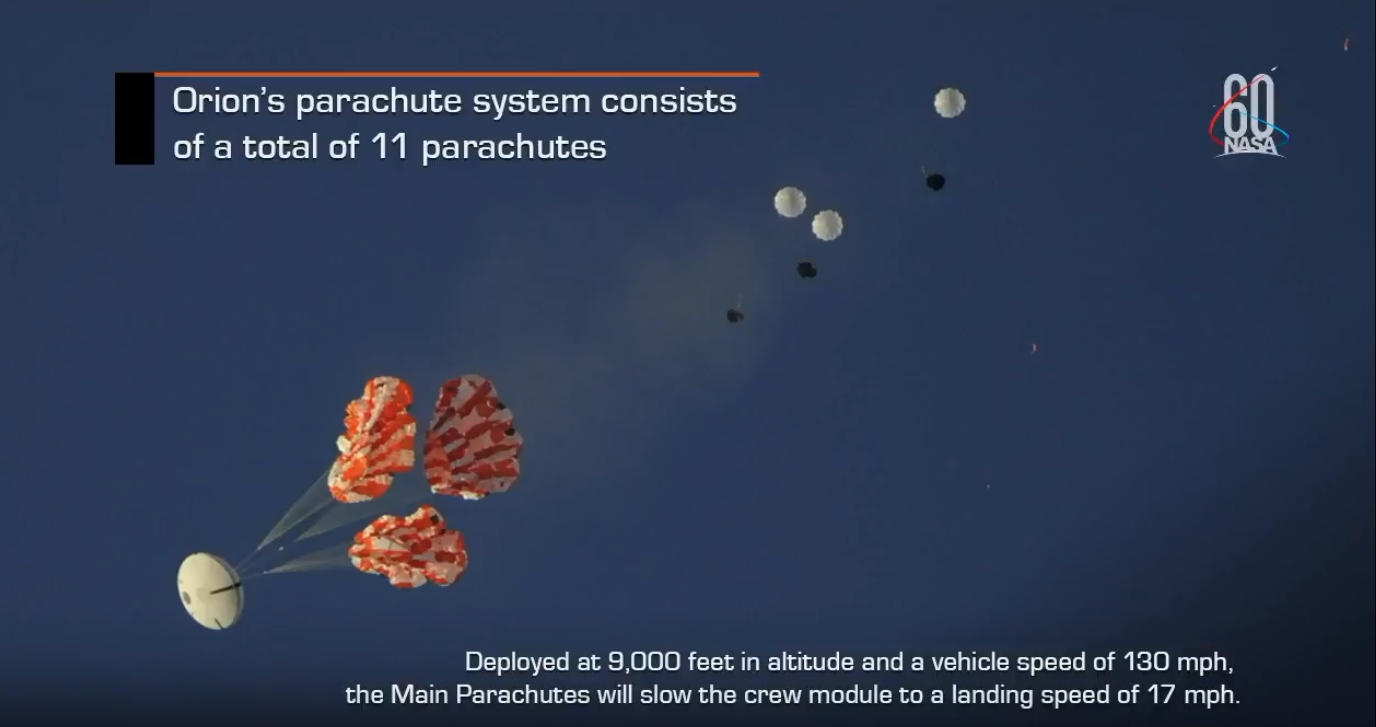 Another requirement was to deal with the Aerospace Safety Advisory Panel (ASAP) concern called ‘pendulum risk’.

Notably, that issue relates to a scenario where one of the three Orion parachutes fails, but the vehicle is then in an unstable return to the splashdown under the two remaining chutes, risking additional complications, not least for the crew onboard.

The ASAP noted pendulum effect is where there is an oscillation of the suspended Orion spacecraft under the parachutes.

It is believed that under certain situations, the landing loads could present a hazard in terms of crew health. However, the Orion team noted they have a good understanding of the issue via extensive analysis and has found that the way to mitigate this risk is reduce the deploy altitude for the main chutes from 8,000 feet to 6,800 feet.

The ASAP expects to be updated on the analysis in future meetings, including information to understand “how that was decided, what the margins were, and why 8,000 feet was the deploy altitude for the parachutes to begin with if 6800 feet is thought to be acceptable now,” per the meeting’s minutes.

The conclusion of the test program will now allow the system to be validated to be used on the first mission for Orion on the Space Launch System (SLS), known as Exploration Mission -1 (EM-1), which will be uncrewed.