Early Friday morning, astronauts onboard the International Space Station were busy at work, harvesting three varieties of leafy greens from the Veggie growth chamber and installing the next generation of plant research – the high-tech Advanced Plant Habitat.

The Veggie plant growth team kicked it up a notch with their sixth round of crops grown aboard the International Space Station with experiment VEG-03D. For the first time, three different plant varieties are simultaneously growing in the Veggie chamber.

On Oct. 27, station astronaut Joe Acaba harvested Mizuna mustard, Waldmann’s green lettuce and Outredgeous Red Romaine lettuce, providing himself and his crew with the makings of a salad — once they top it with salad dressing sent up by the ground crew at Kennedy Space Center in Florida, of course.

“As a continuation of our Veg-03 tech demo efforts, we wanted to try something a little bit different. Building on some of our current ground testing, we decided to attempt a mixed crop. We were hoping that the visual diversity of the plants would be more enjoyable to the crew, as well as the variety of flavors offered by the different types of leafy greens.”

During the harvest, Acaba only clipped about half of the leafy greens, leaving the rest to continue growing for a future yield. This technique, called cut-and-come-again repetitive harvesting, allows the crew to have access to fresh produce for a longer period of time.

Growing three different crops at the same time wasn't without its challenges.

“The biggest complication we have faced thus far has been how well the Mizuna has been growing," Dufour said. "Its long, spear-like stalks tend to get caught in the bellows as the crew opens and closes the unit to water the plants.”

After the Veggie harvest, the crew kept on their virtual overalls and went on to install the Advanced Plant Habitat (APH), NASA’s largest plant growth chamber. 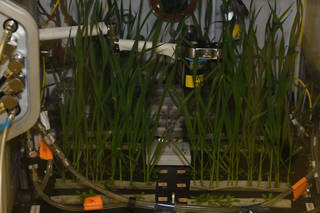 A test unit, or prototype, of NASA's Advanced Plant Habitat (APH) with its first initial grow test in the Space Station Processing Facility at Kennedy Space Center in Florida. The taller plants are dwarf what and the smaller plants are Arabidopsis. Developed by NASA and ORBITEC of Madison, Wisconsin, the APH is the largest plant chamber built for the agency. Photo credit: NASA

As Acaba switched gears from Veggie to the new plant habitat around 5:45 a.m. EDT Friday, APH project manager Bryan Onate and his team walked Acaba through procedures to install the plant habitat into an Expedite the Processing of Experiments to Space Station, or EXPRESS, rack in the Japanese Experiment Module Kibo.

"It's amazing that a plant growth system that began from a blank sheet of paper about five years ago now is installed on the space station," Onate said. "Plant scientists are really going to be able to learn utilizing this system."

The plant habitat is a fully enclosed, closed-loop system with an environmentally controlled growth chamber. It uses red, blue and green LED lights, and broad spectrum white LED lights. The system's more than 180 sensors will relay real-time information, including temperature, oxygen content and moisture levels back to the team at Kennedy.

"APH will be the largest plant growth system on the space station," Howard Levine, the chief scientist in Kennedy's Utilization and Life Science Office who started working on APH seven years ago, said. "It will be capable of hosting multigenerational studies with environmental variables tracked and controlled in support of whole plant physiological testing and bioregenerative life support system investigations."

Once the team at Marshall completes an EXPRESS rack water flow test, the Kennedy team will power up the system. After the water cooling system with the APH passes the test, functional checkout of the plant habitat will begin and take about one week to complete.

Four power feeds to the plant habitat will be turned on and the Kennedy team will monitor the system's Plant Habitat Avionics Real-Time Manager, or PHARMER, for a response. This unique system provides real-time telemetry, remote commanding and photo downlink to the team at Kennedy. 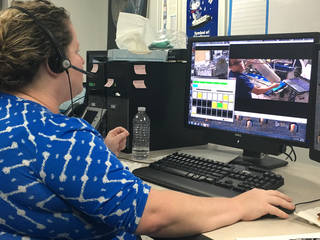 After the PHARMER has verified all subsystems are a go, space station crew members will install the science carrier and initiate the growth of test crops - Arabidopsis seeds, small flowering plants related to cabbage and mustard, and dwarf wheat - during an overlapping timetable of about five weeks. During this time, the system will be monitored for its capability to grow plants, capture and reuse water, and maintain the atmosphere in the growth chamber.

"The test will help us to determine if the planting procedure is good and the habitat is operating as designed," Onate said. "The results of plant growth in the habitat will be compared with the results of tests completed in the control unit here at Kennedy."

All of these preparations are leading up to the initiation of PH-01, which will grow five different types of Arabidopsis and is scheduled to launch on Orbital ATK's ninth commercial resupply mission to the space station.

The nutritional boost of fresh food and the psychological benefits of growing plants become paramount as the agency plans for future missions to deep space destinations.