This image combines two products from the first pointing at the Martian moon Phobos by the THEMIS camera on NASA's Mars Odyssey orbiter, on Sept. 29, 2017. Surface-temperature information from observation in thermal-infrared wavelengths is overlaid on a more detailed image from a visible-light observation.
Credits: NASA/JPL-Caltech/ASU
Full image and caption

NASA's longest-lived mission to Mars has gained its first look at the Martian moon Phobos, pursuing a deeper understanding by examining it in infrared wavelengths.

The Thermal Emission Imaging System (THEMIS) camera on NASA's Mars Odyssey orbiter observed Phobos on Sept. 29, 2017. Researchers have combined visible-wavelength and infrared data to produce an image color-coded for surface temperatures of this moon, which has been considered for a potential future human-mission outpost.

This series of images was taken in visible-wavelength light as the THEMIS camera on NASA's Mars Odyssey scanned across the Martian moon Phobos on Sept. 29, 2017. The apparent motion is due to progression of the camera's pointing during 18 seconds of observing, not from motion of Phobos.
Credits: NASA/JPL-Caltech/ASU
Full image and caption

Looking across the image from left to right presents a sequence of times of day on the Martian moon, from before dawn, to sunrise, to increasing amounts of time after dawn. This provides information about how quickly the ground warms, which is related to the texture of the surface. As barefoot beach walks can confirm, sand warms or cools quicker than rocks or pavement.

This image of Phobos is one product of the first pointing at that Martian moon by the THEMIS camera on NASA's Mars Odyssey orbiter. The Sept. 29, 2017, observation also provided information about temperatures on different areas of Phobos. The oblong moon has an average diameter of about 14 miles.
Credits: NASA/JPL-Caltech/ASU
Full image and caption

"Including a predawn area in the observation is useful because all the heating from the previous day's sunshine has reached its minimum there," Hamilton said. "As you go from predawn area to morning area you get to watch the heating behavior. If it heats up very quickly, it's likely not very rocky but dusty instead."

Phobos has an oblong shape with an average diameter of about 14 miles (22 kilometers). Cameras on other Mars orbiters have previously taken higher-resolution images of Phobos, but none with the infrared information available from THEMIS. Observations in multiple bands of thermal-infrared wavelengths can yield information about the mineral composition of the surface, as well as the surface texture.

One major question about Phobos and Mars' even smaller moon, Deimos, is whether they are captured asteroids or bits of Mars knocked into the sky by impacts. Compositional information from THEMIS might help pin down their origin. 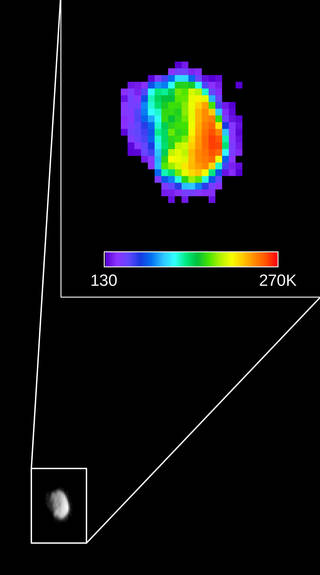 Colors in this image of the Martian moon Phobos indicate a range of surface temperatures detected by observing the moon on Sept. 29, 2017, with the Thermal Emission Imaging System (THEMIS) camera on NASA's Mars Odyssey orbiter.
Credits: NASA/JPL-Caltech/ASU
Full image and caption

Since Odyssey began orbiting the Red Planet in 2001, THEMIS has provided compositional and thermal-properties information from all over Mars, but never before imaged either Martian moon. The Sept. 29 observation was completed to validate that the spacecraft could safely do so, as the start of a possible series of observations of Phobos and Deimos in coming months.

In normal operating mode, Odyssey keeps the THEMIS camera pointed straight down as the spacecraft orbits Mars. In 2014, the spacecraft team at Lockheed Martin Space Systems, Denver; and NASA's Jet Propulsion Laboratory, Pasadena, California; and the THEMIS team at Arizona State University, Tempe, developed procedures to rotate the spacecraft for upward-looking imaging of a comet passing near Mars. The teams have adapted those procedures for imaging the Martian moons.

"We now have the capability of rotating the spacecraft for THEMIS observations," said Odyssey Project Scientist Jeffrey Plaut of JPL. "There is heightened interest in Phobos because of the possibility that future astronauts could perhaps use it as an outpost."

With the first observation now in hand, plans are advancing for additional opportunities at different illumination phases of Phobos and Deimos.

"We want to get observations under all types of lighting -- fully daylit, a small crescent, during eclipse," Hamilton said. "We hope this is the first of several observations that will help us understand Phobos and Deimos."