At 10:50 a.m. EDT, the 230-foot rocket vaulted away from pad 40 carrying 54 more of the company's Starlink internet-beaming satellites to orbit.

A short time after liftoff the 162-foot Falcon 9 first stage booster somersaulted for a landing on the A Shortfall of Gravitas drone ship stationed in the Atlantic Ocean.

Thursday's launch marked the 63rd dedicated Starlink mission for the company and brought the total amount of Starlink satellites launched to over 3,500. It was also SpaceX's 100th successful launch from pad 40 in Florida, according to SpaceX webcast host Siva Bharadvaj.

The automated launch countdown sequence for the 48th Falcon 9 launch of the year began as usual at T-35 minutes. At that point, liquid oxygen (LOX) load in the first stage began and the loading of RP-1 (a highly refined form of kerosene) began in both the first and second stages.

At T-20 minutes, RP-1 load on the second stage completed and ground computers started the process of purging and chilling the second stage umbilical lines ahead of LOX load at T-16 minutes.

This event is usually recognized by the now-famous “T-20 minute vent” from the “strongback” which is the vertical support structure on Falcon 9’s Transporter/Erector – or T/E. This structure contains umbilical lines that power and fuel the second stage, help purge the interstage from oxygen gas buildup, and provide air conditioning to the fairing.

At T-16 minutes this vent stopped, signaling the beginning of LOX load into the second stage. On recent Starlink launches, SpaceX has been experimenting with this part of the propellant load process. These experiments include loading colder liquid oxygen into the second stage to pack more energy into the same volume or extending the load sequence further into the count than in a regular countdown sequence to allow the propellant to stay colder closer to T0.

Nine minutes later, the engine chill process begins. In this process, a small amount of liquid oxygen is allowed to flow through the turbopumps of each of the nine Merlin 1D engines on the first stage. This thermally conditions the pumps ahead of the high flow of this cryogenic fluid during engine ignition and avoids the creation of bubbles of oxygen that could damage the pumps.

At the T-6 minute mark, RP-1 load finishes on the first stage and the tanks get ready for pressurization ahead of strongback retraction. The strongback retraction process begins at around T-4 minutes with the opening of the top clamp arms followed by a roughly one-and-a-half-degree rotation away from the rocket.

LOX load ends on the first stage at around T-3 minutes and continues on the second stage until approximately T-1 minute and 40 seconds. Once propellant loading is complete, the rocket and ground systems prepare for liftoff. This includes purging the propellant lines to both the booster and second stage as well as performing final software checks.

At T-1 minute, control of the automated countdown sequence is handed over to Falcon 9’s onboard computers in a process SpaceX calls “startup.” At this point in the sequence, the tanks also start to pressurize to flight levels. Shortly after, the launch director then gives the go or no-go decision to proceed with the launch.

At T-3 seconds, the onboard computers command ignition of all nine Merlin 1D engines on the first stage, which ramp up to full power 2.8 seconds later. Once engine health is confirmed to be good, the rocket commands the ground computers to release the hold-down clamps, allowing the vehicle to lift off.

The flight profile for this mission follows a similar one to all recent Starlink missions to shell four from Cape Canaveral, where the vehicle arches to the northeast over the Atlantic Ocean. The rocket passed through the area of maximum aerodynamic pressure–or max-Q–roughly one minute and 10 seconds into flight.

Roughly two and a half minutes into the flight, Falcon 9’s first-stage engines shut down in an event called main engine cutoff–or MECO. A few seconds after this, both stages separated and the second stage ignited its single Merlin 1D Vacuum (MVacD) engine.

This was MVacD’s first of two burns during the mission and lasted approximately six minutes. Shortly after ignition, the payload fairing halves separated. While the second stage and Starlink satellites continued on their flight to the target 232-by-336 kilometer orbit, the first stage and fairing halves returned to Earth for recovery and reuse. 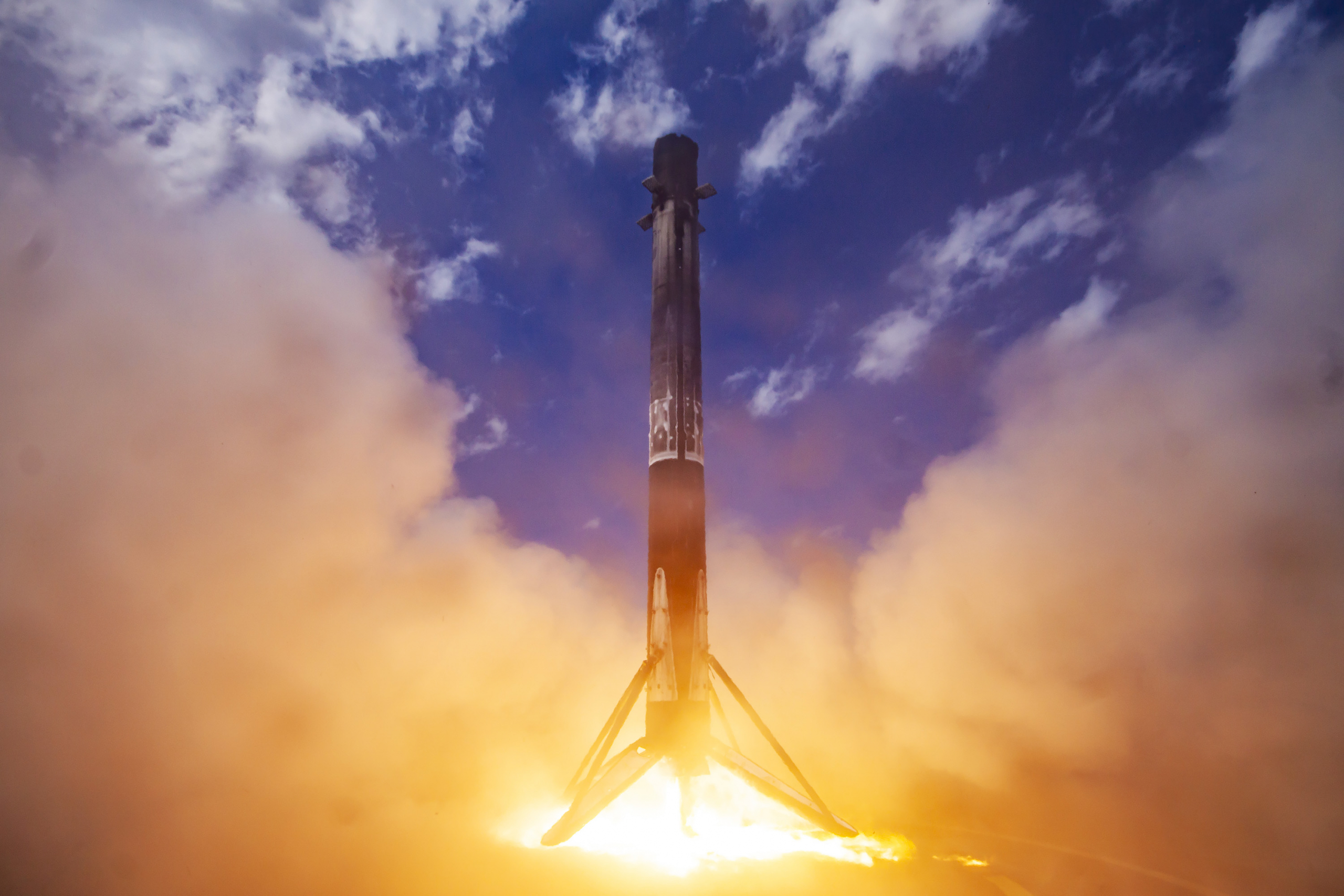 B1062-5 lands on ASOG after supporting the Axiom-1 mission. (Credit: SpaceX)

The fairing halves, meanwhile, oriented themselves for reentry using cold gas thrusters and then parachuted down to a soft splashdown on the ocean. These will be recovered by SpaceX’s multi-purpose recovery vessel Doug.

Both recoveries occur more than 650 km downrange in the North Atlantic Ocean.

Once the satellites are deployed, the MVacD engine on the second stage will perform another burn for deorbit and disposal over the Pacific Ocean. Elon Musk recently shared a video on Twitter of this process as captured by one of the satellite’s onboard engineering cameras on a prior mission.

Thursday’s launch put 54 more Starlink satellites into the fourth shell of the first generation of the constellation, bringing the total of Starlink satellites launched to 3,505. Out of these, 275 satellites have already reentered. Of the ones remaining in orbit, 63 are non-maneuvering and 2,704 are in their operational orbit.

(Status of Starlink constellation from Jonathan McDowell as of Oct. 18)

Falcon 9’s first stage for this mission, B1062, flew for the 10th time after previously supporting the launch of two GPS-III satellites, two private Crew Dragon missions, the launch of the Nilesat 301 geostationary satellite, as well as four prior Starlink missions. This puts B1062 as the sixth booster in the fleet to reach SpaceX’s initial goal of flying the first stages 10 times with minimal refurbishment between flights. 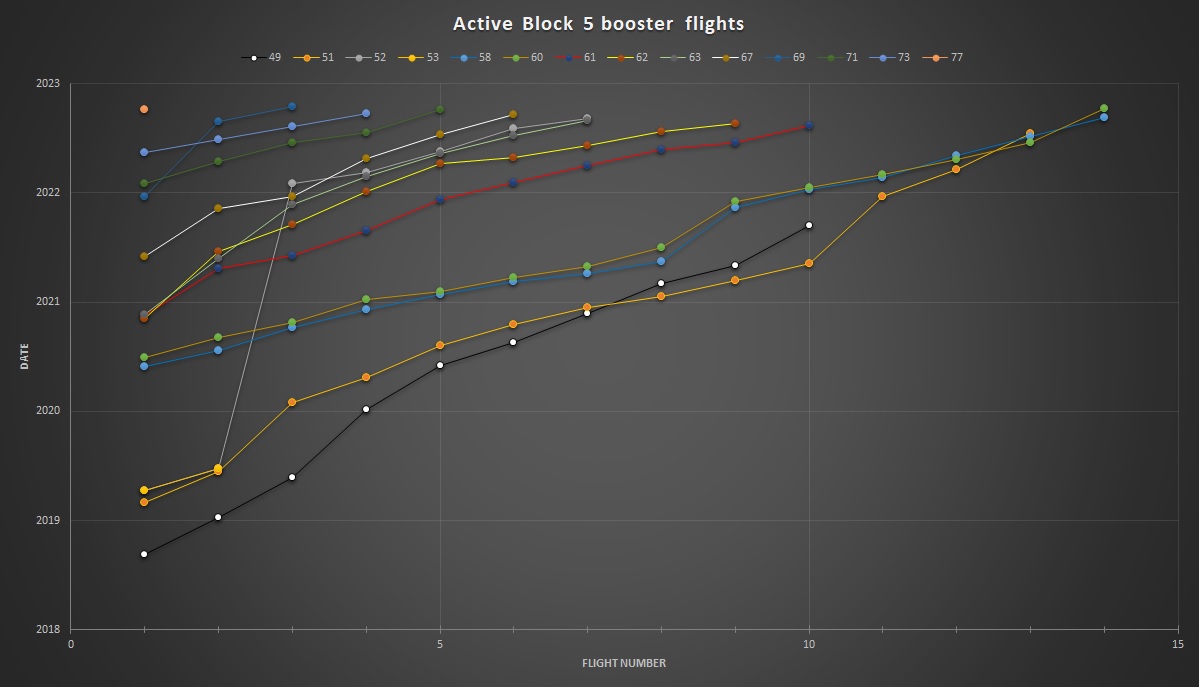 The currently active Falcon 9 Block 5 boosters and their flights

SpaceX’s launch on Thursday was the 63rd launch dedicated to Starlink and the company’s fifth launch of the month. Another Starlink mission from the Cape was previously scheduled to launch next week; however, this was delayed into November to prioritize maintenance work at the launch pad, as well as to ensure schedule priority for commercial customers.

SpaceX’s next mission from Florida will therefore be the long-awaited launch of the USSF-44 mission onboard a Falcon Heavy rocket, currently scheduled for no earlier than Oct. 31. Work has been underway at Launch Complex 39A for the past two weeks to prepare the ground systems for the fourth launch of the world’s most powerful operational rocket.