A Chinese researcher installs the lobster-eye telescope, or the Lobster Eye Imager for Astronomy (LEIA), on Nov. 22, 2021. (NAOC/Handout via Xinhua)

Scientists eyeing the distant universe are sometimes inspired by the diverse creatures on Earth. The lobster-eye telescope developed and launched by Chinese scientists is the latest example.

The National Astronomical Observatories of the Chinese Academy of Sciences (NAOC) recently revealed the world's first batch of large-field X-ray maps of the sky captured by the lobster-eye telescope, or the Lobster Eye Imager for Astronomy (LEIA).

The LEIA, launched into space in late July, is a large-field X-ray imaging telescope, the first of its kind in the world, according to the NAOC. It is expected that with the "lobster eye," people will be able to efficiently observe the mysterious transient phenomena in the universe.

The most special feature of LEIA is its 36 micro-pore lobster-eye glasses and 4 large-array CMOS sensors, all developed by China.

Biologists discovered early on that the lobster's eye is different from other animals. Lobster eyes are made up of numerous tiny square tubes, pointing to the same spherical center. This structure allows light from all directions to reflect in the tubes and converge on the retina, which gives the lobster a large field of view.

In 1979, an American scientist proposed that the lobster eye be simulated to create a telescope to detect X-rays in space. But this idea failed to be realized for a long time until micro-processing technology improved sufficiently to make it possible. Scientists then developed lobster-eye glasses, which are covered with tiny square holes as thick as a hair.

The X-ray Imaging Laboratory of NAOC began the research and development work on lobster-eye X-ray imaging technology in 2010, and finally made a breakthrough.

The newly launched LEIA not only features the much-anticipated lobster-eye glasses, but also pioneers in installing CMOS sensors, which can process with high spectral resolutions.

"We realized the application of CMOS sensors to X-ray astronomical observations in space for the first time. It is an important innovation in X-ray astronomy detection technology," said Ling Zhixing, a scientist of the NAOC.

"The biggest advantage of the lobster-eye telescope is its wide-angle vision," said Ling, who is in charge of the LEIA project.

According to Ling, the previous X-ray telescopes only had a field of view roughly the size of the Moon as seen from Earth, while this lobster-eye telescope is capable of covering a celestial region about the size of 1,000 Moons.

"Twelve such telescopes will be installed on the future Einstein Probe satellite, and their field of view could be as large as about 10,000 Moons," he added.

Scientists have found that most cosmic objects show complex variations in brightness in the X-ray band. Some objects that originally have no X-ray radiation can suddenly produce one, such as black holes that are devouring stars.

As Ling has mentioned, the newly launched LEIA is an experimental module for the Einstein Probe satellite, which is expected to be launched at the end of 2023. A total of 12 modules will then be mounted on the new satellite.

The program has attracted extensive attention worldwide, with the European Space Agency and the Max Planck Institute for Extraterrestrial Physics in Germany participating in it.

"This technology will revolutionize monitoring of the X-ray sky, and the test module shows the strong science potential of the Einstein Probe mission," said Paul O'Brien, head of Astrophysics, School of Physics and Astronomy at the University of Leicester.

"We have finally succeeded in obtaining the observation results of the lobster-eye telescope after more than a decade of arduous efforts, and we are all very proud to be able to contribute such advanced equipment to the world's astronomical research," said Zhang Chen, assistant to the Principal Investigator of the Einstein Probe program.

According to Zhang, the Einstein Probe will carry out systematic sky surveys to monitor high-energy transient objects in the universe.

The mission is expected to discover cloaked black holes and map the distribution of black holes in the universe, and help us to study their formation and evolution.

The Einstein Probe will also be used to search for X-ray signals from gravitational wave events and pinpoint them. Moreover, it will be used in observing neutron stars, white dwarfs, supernovae, early cosmic gamma bursts and other objects and phenomena, he said. ■ 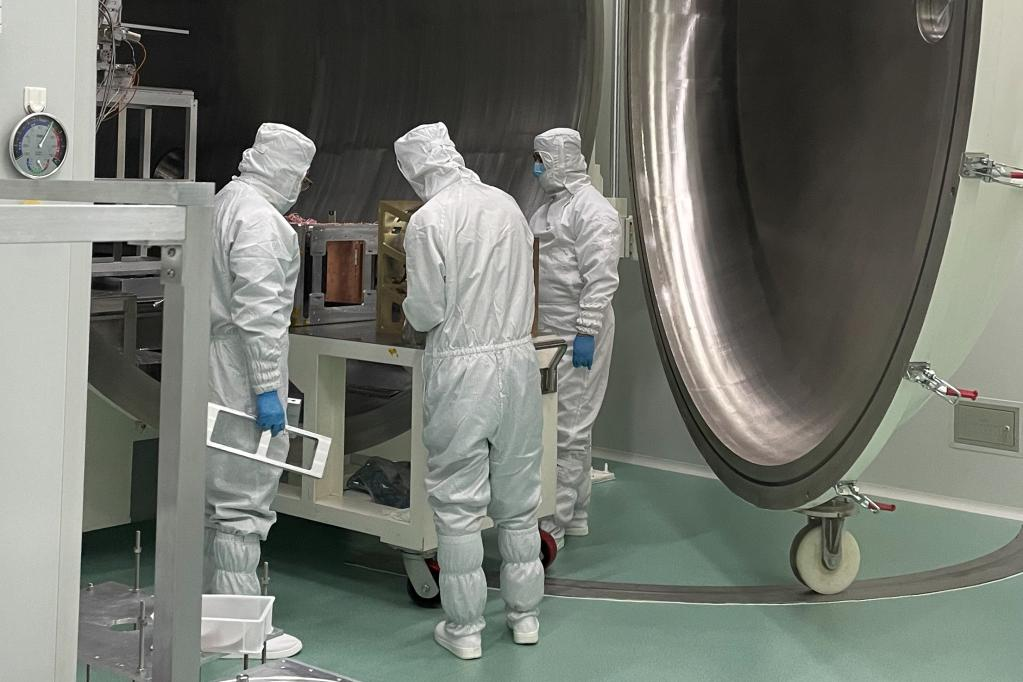 Chinese researchers test the lobster-eye telescope, or the Lobster Eye Imager for Astronomy (LEIA), on Nov. 27, 2021. (NAOC/Handout via Xinhua)

Photo taken in August 2022 shows an image of the central sky zone of the Milky Way obtained by the lobster-eye telescope, or the Lobster Eye Imager for Astronomy (LEIA). (NAOC/Handout via Xinhua)