Astronomers are winding back the clock on the expanding remains of a nearby, exploded star. By using NASA's Hubble Space Telescope, they retraced the speedy shrapnel from the blast to calculate a more accurate estimate of the location and time of the stellar detonation.

The victim is a star that exploded long ago in the Small Magellanic Cloud, a satellite galaxy to our Milky Way. The doomed star left behind an expanding, gaseous corpse, a supernova remnant named 1E 0102.2-7219, which NASA's Einstein Observatory first discovered in X-rays. Like detectives, researchers sifted through archival images taken by Hubble, analyzing visible-light observations made 10 years apart. 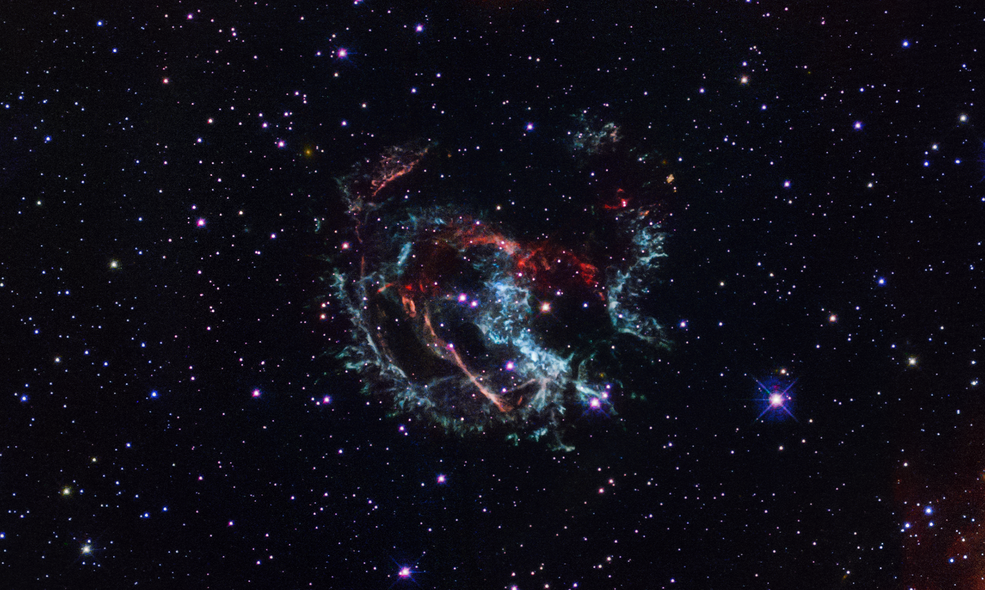 This Hubble Space Telescope portrait reveals the gaseous remains of an exploded massive star that erupted approximately 1,700 years ago. The stellar corpse, a supernova remnant named 1E 0102.2-7219, met its demise in the Small Magellanic Cloud, a satellite galaxy of our Milky Way.
Credits: NASA, ESA, and J. Banovetz and D. Milisavljevic (Purdue University)

The research team, led by John Banovetz and Danny Milisavljevic of Purdue University in West Lafayette, Indiana, measured the velocities of 45 tadpole-shaped, oxygen-rich clumps of ejecta flung by the supernova blast. Ionized oxygen is an excellent tracer because it glows brightest in visible light.

To calculate an accurate explosion age, the astronomers picked the 22 fastest moving ejecta clumps, or knots. The researchers determined that these targets were the least likely to have been slowed down by passage through interstellar material. They then traced the knots' motion backward until the ejecta coalesced at one point, identifying the explosion site. Once that was known, they could calculate how long it took the speedy knots to travel from the explosion center to their current location.

According to their estimate, light from the blast arrived at Earth 1,700 years ago, during the decline of the Roman Empire. However, the supernova would only have been visible to inhabitants of Earth's southern hemisphere. Unfortunately, there are no known records of this titanic event.

The researchers' results differ from previous observations of the supernova's blast site and age. Earlier studies, for example, arrived at explosion ages of 2,000 and 1,000 years ago. However, Banovetz and Milisavljevic say their analysis is more robust.

This time-lapse video shows the movement of a supernova remnant—the gaseous remains of an exploded star—that erupted approximately 1,700 years ago. The stellar corpse, a supernova remnant named 1E 0102.2-7219, met its demise in the Small Magellanic Cloud, a satellite galaxy of our Milky Way. The movie's opening frame shows ribbons of glowing gaseous clumps that make up the remnant. The video then toggles between two black-and-white images of the remnant, taken 10 years apart, revealing subtle shifts in the ejecta's expansion over time.
Credits: NASA, ESA, A. Pagan (STScI), J. Banovetz and D. Milisavljevic (Purdue University)

"A prior study compared images taken years apart with two different cameras on Hubble, the Wide Field Planetary Camera 2 and the Advanced Camera for Surveys (ACS)," Milisavljevic said. "But our study compares data taken with the same camera, the ACS, making the comparison much more robust; the knots were much easier to track using the same instrument. It's a testament to the longevity of Hubble that we could do such a clean comparison of images taken 10 years apart."

The astronomers also took advantage of the sharp ACS images in selecting which ejecta clumps to analyze. In prior studies, researchers averaged the speed of all of the gaseous debris to calculate an explosion age. However, the ACS data revealed regions where the ejecta slowed down because it was slamming into denser material shed by the star before it exploded as a supernova. Researchers didn't include those knots in the sample. They needed the ejecta that best reflected their original velocities from the explosion, using them to determine an accurate age estimate of the supernova blast.

Hubble also clocked the speed of a suspected neutron star—the crushed core of the doomed star—that was ejected from the blast. Based on their estimates, the neutron star must be moving at more than 2 million miles per hour from the center of the explosion to have arrived at its current position. The suspected neutron star was identified in observations with the European Southern Observatory's Very Large Telescope in Chile, in combination with data from NASA's Chandra X-ray Observatory.

"That is pretty fast and at the extreme end of how fast we think a neutron star can be moving, even if it got a kick from the supernova explosion," Banovetz said. "More recent investigations call into question whether the object is actually the surviving neutron star of the supernova explosion. It is potentially just a compact clump of supernova ejecta that has been lit up, and our results generally support this conclusion."

So the hunt may still be on for the neutron star. "Our study doesn't solve the mystery, but it gives an estimate of the velocity for the candidate neutron star," Banovetz said.