During a typical year, over a million people visit Yellowstone National Park, where the Old Faithful geyser regularly blasts a jet of boiling water high in the air. Now, an international team of astronomers has discovered a cosmic equivalent, a distant galaxy that erupts roughly every 114 days.

Using data from facilities including NASA’s Neil Gehrels Swift Observatory and Transiting Exoplanet Survey Satellite (TESS), the scientists have studied 20 repeated outbursts of an event called ASASSN-14ko. These various telescopes and instruments are sensitive to different wavelengths of light. By using them collaboratively, scientists obtained more detailed pictures of the outbursts.

“These are the most predictable and frequent recurring multiwavelength flares we’ve seen from a galaxy’s core, and they give us a unique opportunity to study this extragalactic Old Faithful in detail,” said Anna Payne, a NASA Graduate Fellow at the University of Hawai’i at Mānoa. “We think a supermassive black hole at the galaxy’s center creates the bursts as it partially consumes an orbiting giant star.”

Payne presented the findings on Tuesday, Jan. 12, at the virtual 237th meeting of the American Astronomical Society. A paper on the source and these observations, led by Payne, is undergoing scientific review.

Watch as a monster black hole partially consumes an orbiting giant star. In this illustration, the gas pulled from the star collides with the black hole’s debris disk and causes a flare. Astronomers have named this repeating event ASASSN-14ko. The flares are the most predictable and frequent yet seen from an active galaxy.
Credits: NASA’s Goddard Space Flight Center
Download high-resolution video and images from NASA’s Scientific Visualization Studio

Astronomers classify galaxies with unusually bright and variable centers as active galaxies. These objects can produce much more energy than the combined contribution of all their stars, including higher-than-expected levels of visible, ultraviolet, and X-ray light. Astrophysicists think the extra emission comes from near the galaxy’s central supermassive black hole, where a swirling disk of gas and dust accumulates and heats up because of gravitational and frictional forces. The black hole slowly consumes the material, which creates random fluctuations in the disk’s emitted light.

But astronomers are interested in finding active galaxies with flares that happen at regular intervals, which might help them identify and study new phenomena and events.

“ASASSN-14ko is currently our best example of periodic variability in an active galaxy, despite decades of other claims, because the timing of its flares is very consistent over the six years of data Anna and her team analyzed,” said Jeremy Schnittman, an astrophysicist at NASA’s Goddard Space Flight Center in Greenbelt, Maryland, who studies black holes but was not involved in the research. “This result is a real tour de force of multiwavelength observational astronomy.”

ASASSN-14ko was first detected on Nov. 14, 2014, by the All-Sky Automated Survey for Supernovae (ASAS-SN), a global network of 20 robotic telescopes headquartered at Ohio State University (OSU) in Columbus. It occurred in ESO 253-3, an active galaxy over 570 million light-years away in the southern constellation Pictor. At the time, astronomers thought the outburst was most likely a supernova, a one-time event that destroys a star. 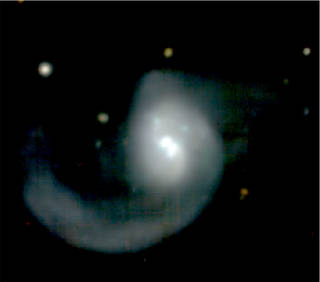 This image of active galaxy ESO 253-3 was captured by the European Space Observatory’s Multi Unit Spectroscopic Explorer as part of the All-weather MUse Supernova Integral-field of Nearby Galaxies (AMUSING) survey. ESO 253-3 displays the most predictable and frequent flares scientists have yet identified in an active galaxy.
Credits: Michael Tucker (University of Hawai’i) and the AMUSING survey

Six years later, Payne was examining ASAS-SN data on known active galaxies as part of her thesis work. Looking at the ESO 253-3 light curve, or the graph of its brightness over time, she immediately noticed a series of evenly spaced flares – a total of 17, all separated by about 114 days. Each flare reaches its peak brightness in about five days, then steadily dims.

Payne and her colleagues predicted that the galaxy would flare again on May 17, 2020, so they coordinated joint observations with ground- and space-based facilities, including multiwavelength measurements with Swift. ASASSN-14ko erupted right on schedule. The team has since predicted and observed subsequent flares on Sept. 7 and Dec. 20.

The researchers also used TESS data for a detailed look at a previous flare. TESS observes swaths of the sky called sectors for about a month at a time. During the mission’s first two years, the cameras collected a full sector image every 30 minutes. These snapshots allowed the team to create a precise timeline of a flare that began on Nov. 7, 2018, tracking its emergence, rise to peak brightness, and decline in great detail.

“TESS provided a very thorough picture of that particular flare, but because of the way the mission images the sky, it can’t observe all of them,” said co-author Patrick Vallely, an ASAS-SN team member and National Science Foundation graduate research fellow at OSU. “ASAS-SN collects less detail on individual outbursts, but provides a longer baseline, which was crucial in this case. The two surveys complement one another.”

Using measurements from ASAS-SN, TESS, Swift and other observatories, including NASA’s NuSTAR and the European Space Agency’s XMM-Newton, Payne and her team came up with three possible explanations for the repeating flares.

One scenario involved interactions between the disks of two orbiting supermassive black holes at the galaxy’s center. Recent measurements, also under scientific review, suggest the galaxy does indeed host two such objects, but they don’t orbit closely enough to account for the frequency of the flares.

The second scenario the team considered was a star passing on an inclined orbit through a black hole’s disk. In that case, scientists would expect to see asymmetrically shaped flares caused when the star disturbs the disk twice, on either side of the black hole. But the flares from this galaxy all have the same shape.

The third scenario, and the one the team thinks most likely, is a partial tidal disruption event.

A tidal disruption event occurs when an unlucky star strays too close to a black hole. Gravitational forces create intense tides that break the star apart into a stream of gas. The trailing part of the stream escapes the system, while the leading part swings back around the black hole. Astronomers see bright flares from these events when the shed gas strikes the black hole’s accretion disk.

In this case, the astronomers suggest that one of the galaxy’s supermassive black holes, one with about 78 million times the Sun’s mass, partially disrupts an orbiting giant star. The star’s orbit isn’t circular, and each time it passes closest to the black hole, it bulges outward, shedding mass but not completely breaking apart. Every encounter strips away an amount of gas equal to about three times the mass of Jupiter.

Astronomers don’t know how long the flares will persist. The star can’t lose mass forever, and while scientists can estimate the amount of mass it loses during each orbit, they don’t know how much it had before the disruptions began.

Payne and her team plan to continue observing the event’s predicted outbursts, including upcoming dates in April and August 2021. They’ll also be able to examine another measurement from TESS, which captured the Dec. 20 flare with its updated 10-minute snapshot rate.

“TESS was primarily designed to find worlds beyond our solar system,” said Padi Boyd, the TESS project scientist at Goddard. “But the mission is also teaching us more about stars in our own galaxy, including how they pulse and eclipse each other. In distant galaxies, we’ve seen stars end their lives in supernova explosions. TESS has even previously observed a complete tidal disruption event. We’re always looking forward to the next exciting and surprising discoveries the mission will make.”

TESS is a NASA Astrophysics Explorer mission led and operated by MIT in Cambridge, Massachusetts, and managed by NASA's Goddard Space Flight Center. Additional partners include Northrop Grumman, based in Falls Church, Virginia; NASA’s Ames Research Center in California’s Silicon Valley; the Harvard-Smithsonian Center for Astrophysics in Cambridge, Massachusetts; MIT’s Lincoln Laboratory; and the Space Telescope Science Institute in Baltimore. More than a dozen universities, research institutes, and observatories worldwide are participants in the mission.

Goddard manages the Swift mission in collaboration with Penn State in University Park, the Los Alamos National Laboratory in New Mexico, and Northrop Grumman Innovation Systems in Dulles, Virginia. Other partners include the University of Leicester and Mullard Space Science Laboratory in the United Kingdom, Brera Observatory and the Italian Space Agency in Italy.

ASAS-SN is operated by Las Cumbres Observatory and funded in part by the Gordon and Betty Moore Foundation.