It has been a busy year of science aboard the International Space Station. In November, we kicked off the 20th year of continuous human presence aboard the space station, which so far has hosted 239 people and more than 2,700 science experiments. During the past year, research has ranged from growing leafy greens in microgravity to analyzing mining microbes to testing out autonomous robots. This research is benefiting people on Earth while helping prepare us to go forward to the Moon in 2024, and then on to Mars.

Take a look at some of the pioneering investigations crew members worked on in 2019: 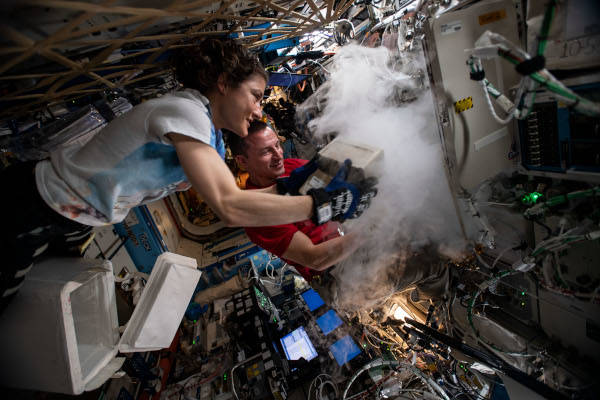 NASA astronauts Christina Koch and Andrew Morgan stow biological research samples into a science freezer located inside the U.S. Destiny laboratory module. It is important to store scientific samples in cold facilities like the General Laboratory Active Cryogenic ISS Experiment Refrigerator (GLACIER) to preserve the data produced in space for researchers to analyze on Earth.

ESA (European Space Agency) astronaut Luca Parmitano holds an Amyloid Aggregation blue jar. Amyloid fibrils, a conglomeration of proteins that can build up in the body, are associated with a number of neurodegenerative conditions such as Alzheimer’s and Parkinson’s diseases. The Amyloid Aggregation investigation assesses whether microgravity affects formation of these fibrils, which represents a potential risk to astronauts on long flights.

Students participating in the Sally Ride EarthKAM project time the perfect shot to catch JAXA’s HTV-8 cargo vehicle making its way to the space station carrying science and supplies. The Sally Ride EarthKAM program allows students to request photographs of specific Earth features, taken by a special camera mounted on the space station when it passes over those landscapes. Learn more about the science that was on board HTV-8 here.

Harnessing the power of microbes 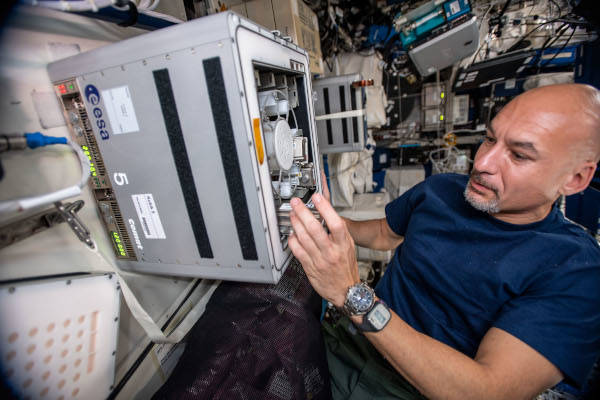 ESA astronaut Luca Parmitano installs biomining reactors in KUBIK as a part of the BioRock investigation. For centuries, people have done the hard work of mining useful minerals and metals from solid rock. Then, scientists learned how to harness the power of tiny microbes to do some of this labor. This process, called biomining, has become common on Earth. The BioRock investigation represents the first study of how microbes grow on and alter planetary rocks in microgravity and simulated Martian gravity.

Getting a closer look 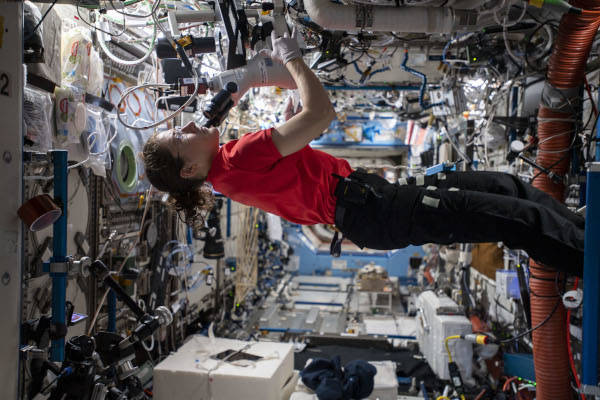 Expedition 60 flight engineer Christina Koch of NASA uses a microscope to observe and photograph growing protein crystal samples as part of the Microgravity Crystals experiment. The Microgravity Crystals investigation crystallizes a membrane protein that is integral to tumor growth and cancer survival. Results may support development of cancer treatments that target the protein more effectively and with fewer side effects. 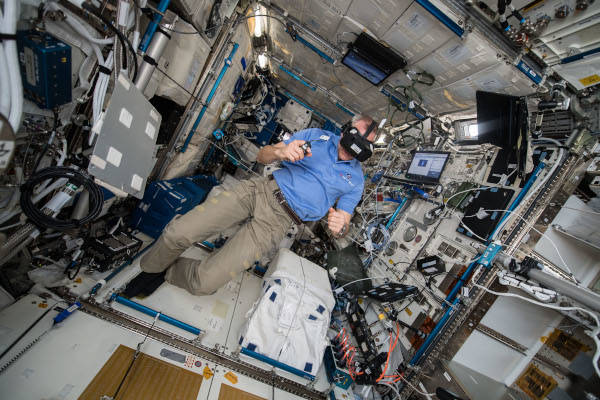 Canadian Space Agency (CSA) astronaut David Saint-Jacques performs a session of the Time Perception in Microgravity investigation that measured the subjective changes in time perception in humans during and after long-duration exposure to microgravity. Crew members were asked to indicate how long they see a blue square in the center of a head-mounted display. 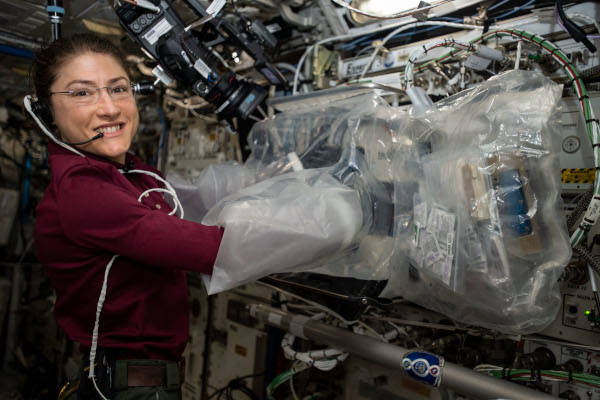 NASA astronaut Christina Koch activates the BioFabrication Facility (BFF) to test its ability to print organ-like tissues in space. Scientists and medical professionals have long dreamed of using 3D biological printers to produce usable human organs. But printing the tiny, complex structures found inside human organs has proven difficult in Earth’s gravity. The BFF allows researchers to explore whether the microgravity environment of space may support the fabrication of human organs in space. 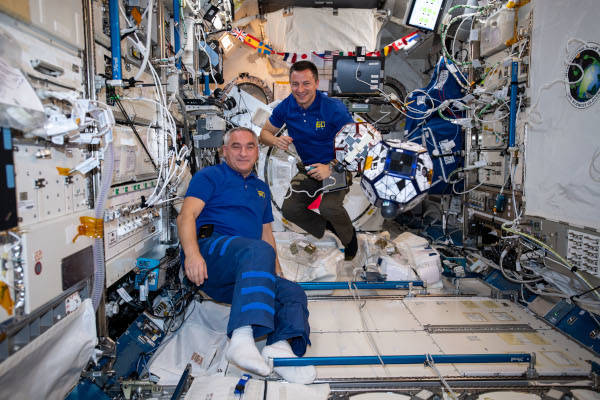 Expedition 60 Flight Engineers cosmonaut Alexander Skvortsov and astronaut Andrew Morgan float with the SPHERES robots, putting small spacecraft technologies to the test. The crew is running code from participants of the SPHERES Zero Robotics (ZR) 2019 Middle School Summer Program. This program tests student-developed algorithms and selects the best designs from the competition to operate the robots on board the space station. 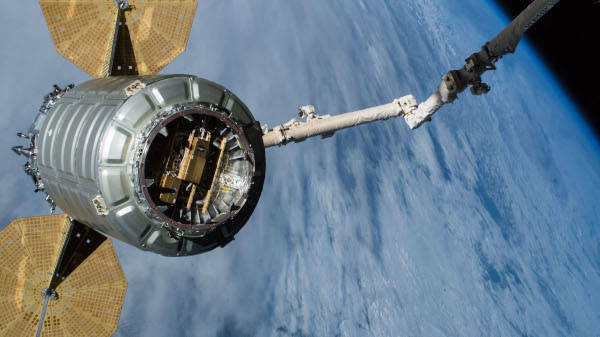 The NG-10 Cygnus cargo craft from Northrop Grumman, with its prominent cymbal-shaped solar arrays, is in the grips of the Canadarm2 robotic arm. Cygnus was released moments later as the space station orbited over the Pacific Ocean. Visible in Cygnus' Common Berthing Mechanism is the SlingShot small satellite deployer, designed to deploy CubeSats from the cargo ship once it reaches a safe distance from the station. 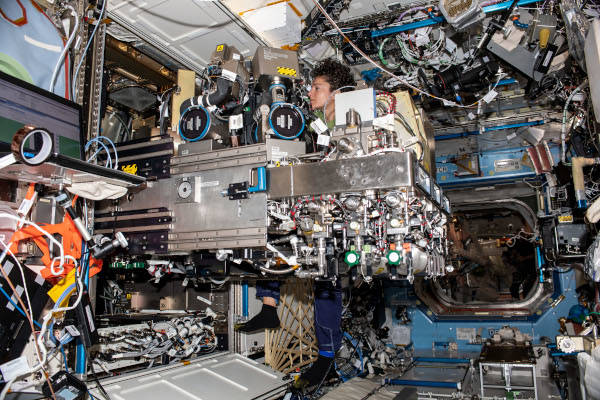 One of the jobs of the space station crew is to run and maintain the science hardware. In the above pictures, NASA astronaut Jessica Meir works on the Combustion Integrated Rack (CIR), a facility in which combustion experiments can be performed in microgravity. The CIR, along with facilities such as the Microgravity Science Glovebox, create a secure and safe environment in which to study combustion without putting the crew in danger. 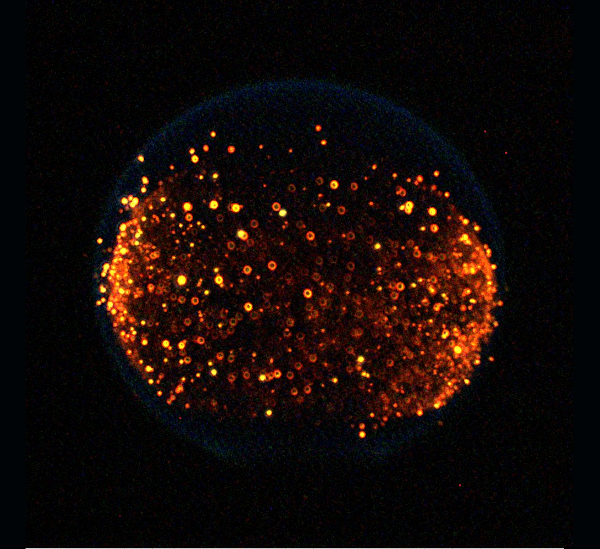 This flame was one of many ignited as part of the Flame Design investigation inside of CIR to investigate the amount of soot that is produced in different conditions. The yellow spots are soot clusters that glow yellow when hot. These clusters grow larger in microgravity than on Earth because the soot remains within the flame longer. 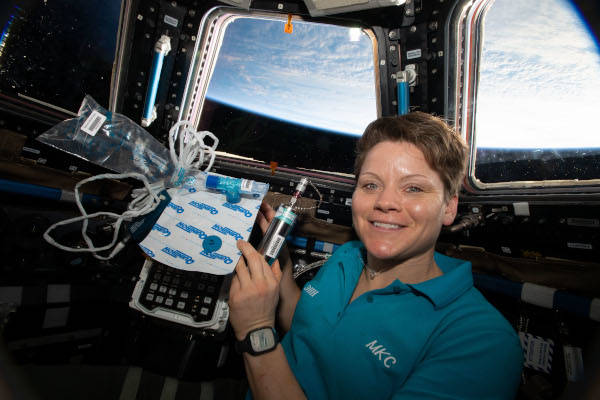 NASA astronaut Anne McClain is pictured in the cupola of the space station holding biomedical gear for the Marrowexperiment. The study measures fat changes in the bone marrow before and after exposure to microgravity. In addition, this investigation measures specific changes of red and white blood cell functions. 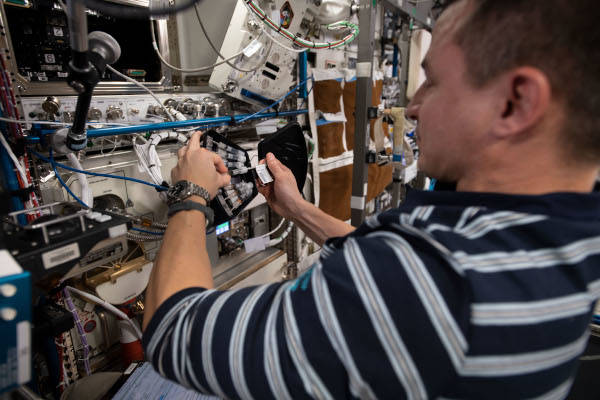 NASA astronaut Andrew Morgan works with the Multi-use Variable-g Platform (MVP) Experiment Module used in the MVP Cell-02 investigation aboard the space station. The MVP enables space biology research into a variety of small organisms such as fruit flies, flatworms, plants, fish, cells, protein crystals and many others. The Cell-02 experiment seeks to understand how organisms adapt to the space environment, an important component of future space exploration. 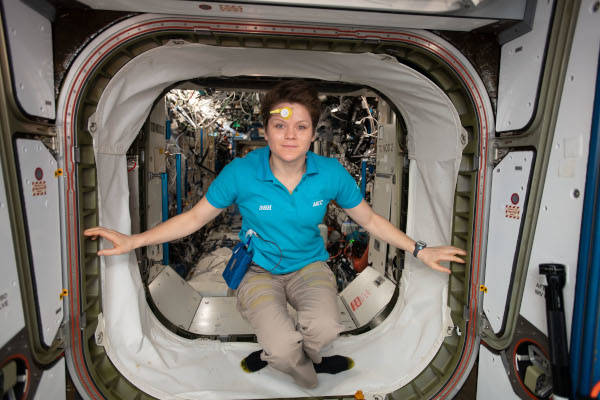 NASA astronaut Anne McClain is pictured inside the vestibule between the Harmony module and the Destiny laboratory module. She is wearing a sensor on her forehead that is collecting data for the Circadian Rhythmsexperiment researching how an astronaut's “biological clock” changes during long-duration spaceflight. 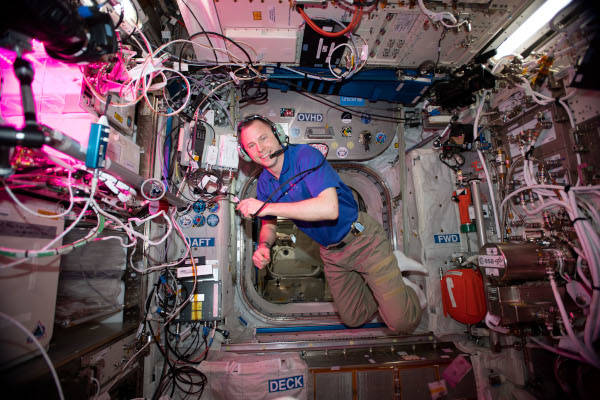 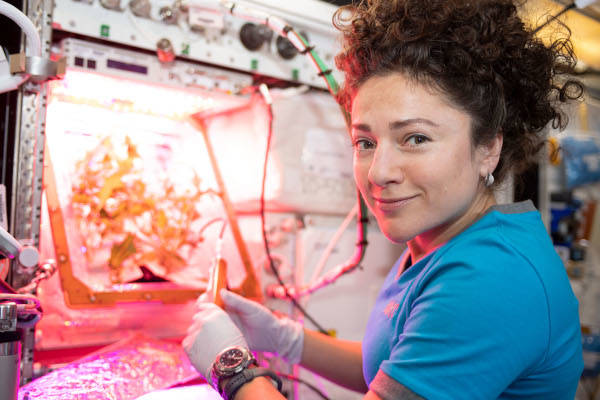 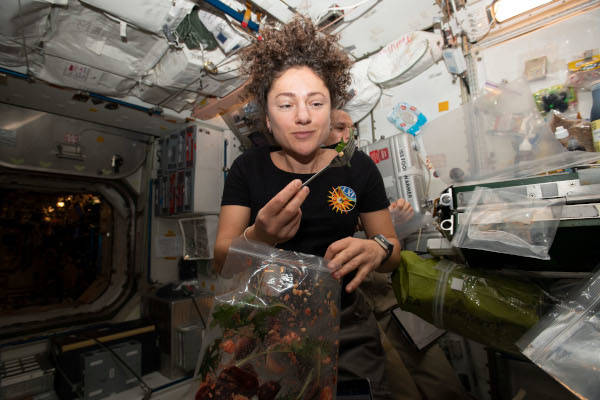 NASA astronaut Jessica Meir waters the plant pillows of Mizuna mustards greens aboard the space station, and then eats the greens after harvesting. The greens were raised as part of the Veg-04B experiment. This investigation is part of a phased research project to address the need for a continuous fresh food production system in space and focuses on the effects of light quality and fertilizer on a leafy crop. 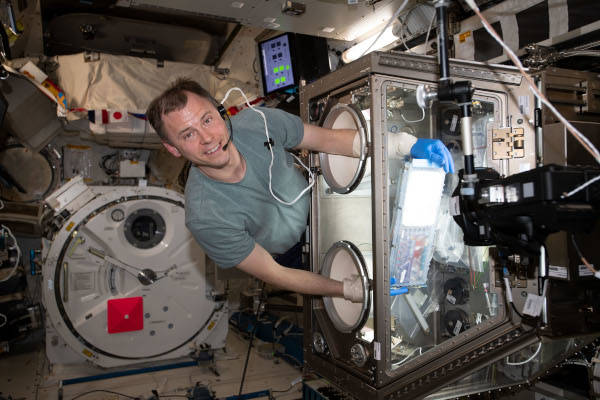 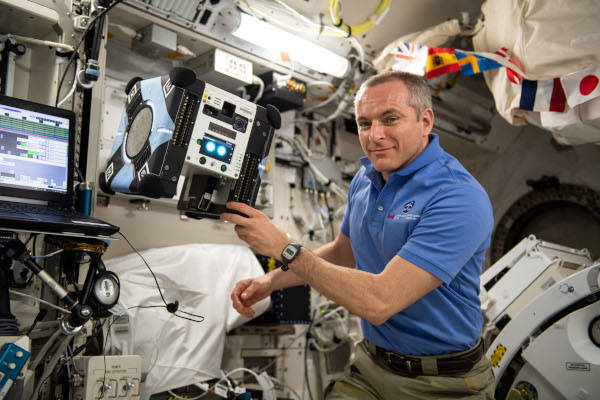 Canadian Space Agency (CSA) astronaut David Saint-Jacques is photographed working with the free-flying Astrobee cube named Bumble and the docking station onboard the space station. Astrobee consists of three self-contained free flying robots and a docking station for use inside the station. It is an autonomous free flyer powered by fans and operates in the entire U.S. Operating Segment (USOS) using vision-based navigation. 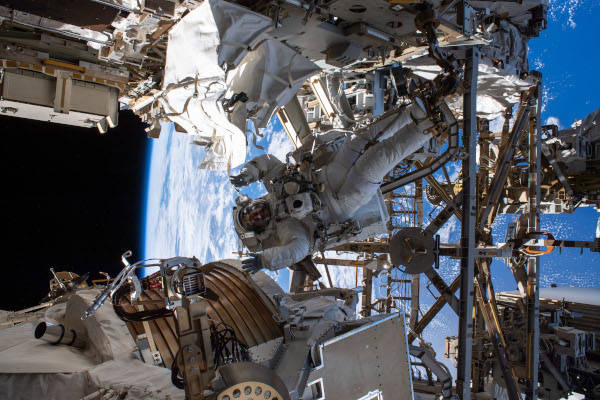 NASA astronaut Andrew Morgan waves as he is photographed, seemingly camouflaged among the Alpha Magnetic Spectrometer (AMS-02) and other station hardware during the first spacewalk to repair the cosmic particle detector. AMS has provided hundreds of researchers around the globe with data that can help piece together the puzzle of what the universe is made of and how it began. As with many items exposed to the harsh environment of space, AMS needed an upgrade to continue its data collection.

These are just a few of the many investigations currently being conducted aboard the orbiting laboratory. For daily updates, follow @ISS_Research, Space Station Research and Technology News or our Facebook. For opportunities to see the space station pass over your town, check out Spot the Station.