In 2020, NASA will be taking long strides toward returning astronauts to the Moon, continuing the exploration of Mars and developing new technology to make supersonic aircraft fly more quietly.

In 2020, NASA will be taking long strides toward returning astronauts to the Moon, continuing the exploration of Mars and developing new technology to make supersonic aircraft fly more quietly.

Launching Americans from U.S. soil, sending a new rover to Mars and continuing to prepare for human missions to the Moon are just a few of the things NASA has planned for 2020.
Credits: NASA TV/Lacey Young

Artemis: Returning astronauts to the Moon

Under Artemis, NASA will send new science instruments and technology demonstrations to study the Moon, accelerate plans to send astronauts to the Moon by 2024, and establish sustainable lunar exploration by 2028. One of Artemis's major milestones in 2020 will be the Green Run test of all four engines of the Space Launch System's core stage. NASA will also continue to work with commercial partners to send landers to the Moon, where they will help prepare the way for astronaut landings, including a rover that will map water ice on the Moon.

After uncrewed test flights in 2019, Boeing and SpaceX are getting ready to launch American astronauts from the United States for the first time since the space shuttle's last mission 2011.  Commercial spacecraft and rockets already are delivering cargo to the space station, with more supply flights this year, and crew vehicles are will undergo their final tests.

The space station -- in its 20th year of hosting astronauts in orbit -- is more than a destination for next-generation spacecraft. Astronauts use the space station for exploration technology, advanced life support systems and human and robotic interfaces. It’s a unique microgravity test bed and national laboratory where humans work to benefit life on Earth and prepare for destinations farther into our solar system. 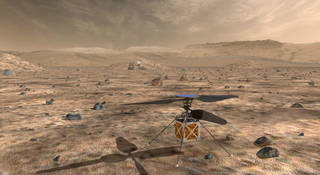 NASA's Mars Helicopter, a small, autonomous rotorcraft, will travel with the agency's Mars 2020 rover, currently scheduled to launch in July 2020, to demonstrate the viability and potential of heavier-than-air vehicles on the Red Planet.
Credits: NASA/JPL-Caltech

NASA's latest mission to Mars -- a mission that will receive a new name before launch -- will be the latest rover to head to the Red Planet, but it's not going alone. To aid it in its exploration, it's carrying the first helicopter that will fly on another planet.

NASA is continuing its research to make supersonic aircraft -- which generate loud booms as they go slow down below the speed of sound -- quieter and more amenable to flying in populated areas. The X-59, or QUESST, aircraft passed a major review milestone in 2019, progressing toward more inflight tests.

2020 promises developments on many fronts as we continue to lead the world in exploration and inspire the next generation.