A Dutch website set up to record UFO sightings was flooded early Saturday with reports after a "train of stars" was spotted crossing the Netherlands' skies, sparking fears of an alien invasion.

But what some thought to be a close encounter of the third kind turned out to be a string of some 60 satellites launched by US-based SpaceX hours earlier as part of its "Starlink" constellation.

The row of satellites which are part of a plan by billionaire Elon Musk's firm to provide internet from space, glided across Dutch skies around 1:00 am (2300 GMT).

Shortly afterwards, Dutch website www.ufomeldpunt.nl was inundated with more than 150 sighting reports, with astonished spotters describing a "bizarre train of stars or lights moving across the skies at constant speed".

"There's a long line of lights. Faster than a plane. Huh?" one spotter reported, while another called it a "star caravan" and one saying "I have it on film".

"I didn't know what to make of it," an unnamed witness later told the NOS public broadcaster.

"Is it Russia attacking the US? Are they UFOs? Seriously, I didn't know," the witness said.

One of SpaceX's Falcon 9 rockets blasted off without incident from Cape Canaveral in Florida at around 0230 GMT on Friday.

An hour after liftoff, the rocket began to release the satellites at an altitude of 280 miles (450 kilometres).

The satellites then had to separate and use their thrusters to take up their positions in a relatively low orbit of 340 miles (550 kilometres).

Each of the satellites weighs 227 kilograms (500 pounds) and was built in-house in Redmond, near Seattle.

Starlink will become operational once 800 satellites have been activated, which will require a dozen more launches.

One Dutchman who remained unfazed was satellite spotter Marco Langbroek, who knew what the mysterious lights were -- and had his camera on hand.

"I cheered them on, the moment they appeared," he told the NOS.

SpaceX’s unorthodox card-dealing launch of 60 Starlink broadband satellites has led to into an unusual viewing opportunity for skywatchers — and an occasion to wonder about the impact of such mega-constellations on the natural night sky.

A video captured by satellite-watcher Marco Langbroek in the Netherlands sums up the awe. “I could not help shouting ‘OAAAAAH!!!!’ he wrote on his SatTrackCam Leiden blog. “Here is the video I shot, be prepared to be mind-blown!”:

It didn’t take long for Langbroek and other skywatchers to work out the coordinatesfor the long train of satellites, and to plug those coordinates into online satellite-pass calculators such as CalSky. On Twitter, David Dickinson, author of “The Universe Today Ultimate Guide to Viewing the Cosmos,” started doling out location-specific sighting predictions based on the Orbitron satellite-tracking program.

CalSky automatically picks up your coordinates for satellite sightings, but for those in the Seattle area, the best time to look for the Starlink train passing by tonight is likely to be in the range of 10:50 to 11:10 p.m. PT, going from southwest to northeast. That’s a liberal stretch of time that accounts for a range of locations (say, Port Townsend vs. North Bend), plus uncertainties in the orbital estimates.

There are other passes overnight at around 12:30, 3:50 and 5:20 a.m. PT. The brightness of the satellites is a question mark. Some say they can be seen with the naked eye, while others advise scanning with binoculars. A lot depends on how the satellites pick up the glint of the sun after dusk or before dawn. Tonight Langbroek reported that the satellite train wasn’t as bright as it was the night before.

Speaking of brightness, astronomers and SpaceX fans have already begun the debate over the prospect of having thousands of broadband-beaming satellites in low Earth orbit. The 60 satellites launched this week merely represent the beginning of a campaign aimed at launching as many as 11,000 such spacecraft. And that’s just for SpaceX’s Starlink system. Thousands more could go into orbit for the constellations being contemplated by OneWeb, Telesat, LeoSat Enterprises and Amazon’s Project Kuiper.

Last year, Rocket Lab came in for some grief from astronomers for sending up its “mirror-ball” Humanity Star satellite for a few months of twinkle time in the night sky. This week’s Starlink spectacle renewed the discussion over potential interference with astronomical observations. Even SpaceX CEO Elon Musk joined in:

I know people are excited about those images of the train of SpaceX Starlink satellites, but it gives me pause.

They’re bright, and there are going to be a lot of them.

If SpaceX launches all 12,000, they will outnumber stars visible to the naked eye.

1,232 people are talking about this

Not a single one will be visible at night. Just near dusk or dawn, which are not good observing times anyway. Also, only a handful will be around at any given location. It's just not a problem.

36 people are talking about this

Precisely, sats will be in darkness when stars are visible

137 people are talking about this

I get that, but I see ISS ALL THE TIME at night and it has a lower altitude.

Elon Musk ✔@elonmusk
Replying to @mcjamez and 3 others

ISS is extremely gigantic & has lights

123 people are talking about this

Dr Marco Langbroek@Marco_Langbroek
Replying to @elonmusk and 2 others

Hate to disagree with @elonmusk, but: that is true in wintertime, but not in summertime. Then, with altitudes at 550 km, they are visible throughout the night at middle latitudes like Europe. Just like they were last night:https://vimeo.com/338361997

Trevor Mahlmann@TrevorMahlmann
Replying to @elonmusk and 2 others

I’m firmly in the ‘i think they’ll be spaced out enough it won’t really matter’ camp, but that is not true.

Here’s an updated video with the exposure turned up to 11. I was so excited I just had to share it as quick as possible and forgot to do this before 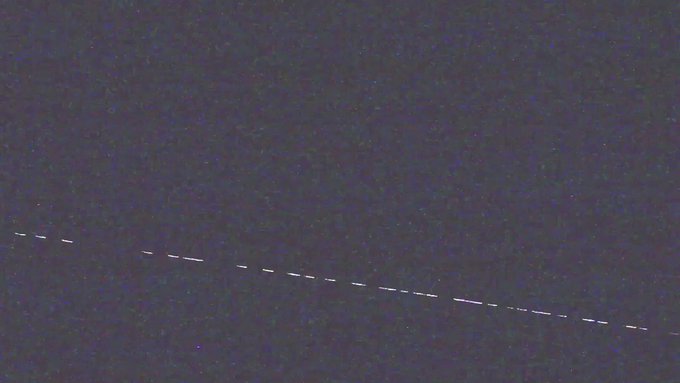 26 people are talking about this

I’ll try to do a sunlit temporal and spatial analysis tomorrow. I’m guessing we won’t like the number.

In any case, the Starlink satellites shouldn’t be bunched up for long. SpaceX’s plan calls for each satellite to raise its orbit from the deployment altitude of 440 kilometers (273 miles) to the operational altitude of 550 kilometers (342 miles). That happens on a timed basis, every 90 minutes. The idea is that as each satellite raises its orbit, it lags behind the rest of the chain.

Within just a few days, the tightly spaced “train” will turn into a dispersed chain that girdles the globe. And once that happens, chances are that skywatchers and sky-worriers alike will turn their attention to the next batch of Starlink satellites.

It’s best to start looking a few minutes early to account for uncertainties in the orbital predictions. And for what it’s worth, the predictions from various websites vary by a few minutes. Those other sites include CalSky and CMDR2. According to CalSky, only the opportunities at 10:12 and 11:49 p.m., plus the 3:04 a.m. appearance, will be illuminated.

Earlier this week, SpaceX successfully launched its first 60 StarLink satellites into orbit around the Earth. An amateur astronomer in the Netherlands caught sight of them orbiting Earth after deployment, and captured the scene on video.

Astronomer Dr. Marco Langbroek noted on his blog that he calculated where the satellites would be orbiting, and waited with his camera. The result is a spectacular one: a string of bright dots flying across the sky, prompting some people to report that they saw UFOs.

Langbroek shot the video with a “WATEC 902H low-light-level surveillance camera, equipped with a Canon FD 1.8/50 mm lens,” and counted at least 56 distinct objects. He noted that the “train” will make 2-3 passes each night, and will eventually spread out into their destination orbits.

The satellites are part of SpaceX’s more ambitious projects: a massive fleet of satellites orbiting between 340 and 208 miles up that will provide internet connectivity around the Earth. SpaceX’s launch earlier this week is the first of many that will eventually launch nearly 12,000 units into orbit in the coming years.