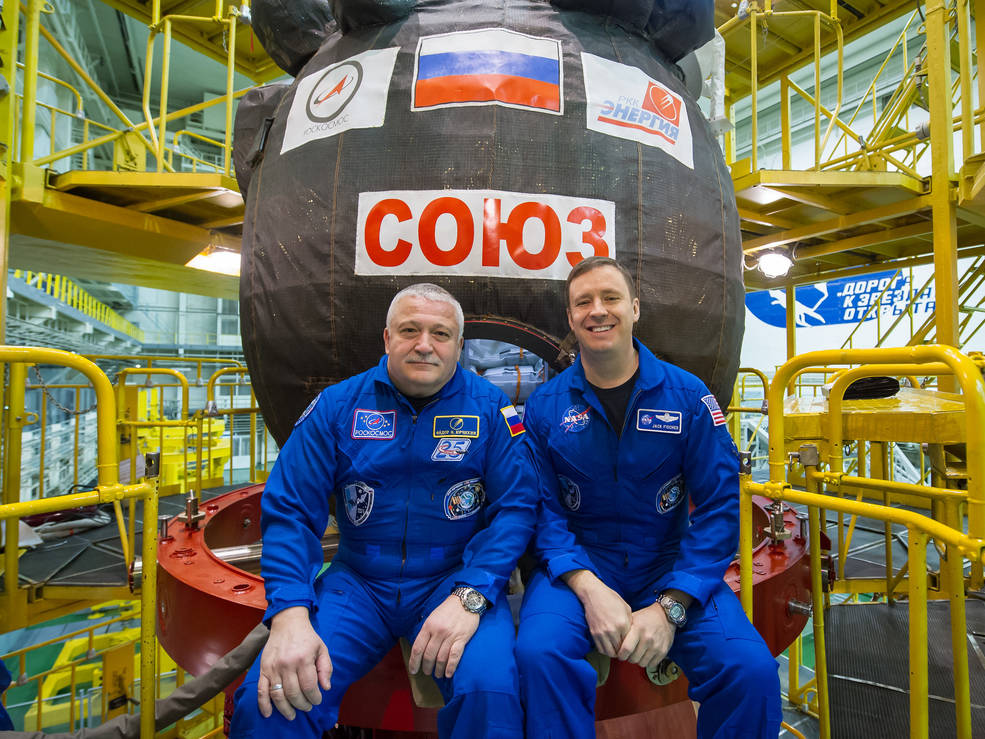 In the Integration Building at the Baikonur Cosmodrome in Kazakhstan, Expedition 51 crewmembers Fyodor Yurchikhin of the Russian space agency Roscosmos and Jack Fischer of NASA sit for pictures April 6, 2017, in front of their Soyuz MS-04 spacecraft as part of pre-launch preparations.
Credits: NASA

NASA astronaut Jack Fischer is poised for a journey of exploration and research on the International Space Station. Extensive coverage of upcoming prelaunch activities, launch and arrival will air on NASA Television and streamed on the agency’s website.

Coverage begins Thursday, April 13, with video of prelaunch activities in Baikonur, Kazakhstan, which will air on NASA TV through Wednesday, April 19.

Fischer and his Expedition 51-52 crewmate Fyodor Yurchikhin, of the Russian space agency Roscosmos, are scheduled to launch at 3:13 a.m. EDT Thursday, April 20 (1:13 p.m. Baikonur time), from the Baikonur Cosmodrome aboard a Soyuz MS-04 spacecraft. NASA TV coverage of the launch will begin at 2:15 a.m.

The pair will travel on a fast-track, six-hour course to the space station and dock to the Poisk module at 9:23 a.m. NASA TV coverage of the docking will begin at 8:30 a.m. Once at the station, they will be welcomed by Expedition 51 Commander Peggy Whitson of NASA and Flight Engineers Oleg Novitskiy of Roscosmos and Thomas Pesquet of ESA (European Space Agency). Hatches between the Soyuz and space station will open at 11:05 a.m. NASA TV coverage of hatch opening and welcome ceremonies will begin at 10:45 a.m.

Expedition 51 will continue work on hundreds of experiments in biology, biotechnology, physical science and Earth science aboard the International Space Station, humanity’s only microgravity laboratory.

Fischer, a first-time space flier, and Yurchikhin, a veteran of four spaceflights, will spend more than four months aboard the orbiting laboratory before returning to Earth in early September. BAIKONUR (Kazakhstan), The state commission at the Baikonur space center in Kazakhstan has approved the crew of a new expedition to the International Space Station (ISS), Russia’s State Space Corporation Roscosmos told TASS on Wednesday.

The launch of a Soyuz-FG carrier rocket with a Soyuz MS-04 spacecraft to the International Space Station is planned for 10:13 Moscow time on April 20. After reaching the orbit, it will take the spacecraft six hours to approach the ISS. The spacecraft is expected to dock with the world orbiter’s Russian module Poisk at 16:22 Moscow time on the same day.

The previous three flights of the Soyuz MS spacecraft were held under a two-day scheme as they were carried out in the testing mode.

It was reported earlier that a Soyuz-FG carrier rocket with a Soyuz MS-04 spacecraft had been installed on a launch pad at the Baikonur spaceport.

Previous reports said that a smaller crew would fly to the International Space Station as a 70-kg cargo container would be installed on the vacant third seat.

Roscosmos has reported that two of four Soyuz spacecraft crews will comprise two instead of three members in 2017. This situation is expected to last until the multifunctional laboratory module Nauka docks with the space station.

Yurchikhin and Fischer earlier pledged to work faster to successfully fulfil scientific tasks in a crew of two aboard the world’s sole orbiter.

A Soyuz manned spacecraft scheduled to take off tomorrow to the International Space Station is the first in the batch to get a name, Argo, Roscosmos has announced.

"The Soyuz MS-04 manned spacecraft has been named Argo," the statement says.

A day before the launch, Russian cosmonaut Fyodor Yurchikhin said that his vision of the spacecraft differs from that of NASA astronaut Jack Fischer. "He believes our spacecraft is female, a fiancee, and asked our lead designer, Sergey Romanov, for his blessing. I believe the spacecraft is male, a man of character," Yurchikhin noted, adding that the following expedition is also mulling over a name for their spacecraft.

A Soyuz-FG carrier rocket is scheduled to launch from the Baikonur Cosmodrome at 10:13 a.m. Moscow time on April 20 to deliver the Soyuz MS-04 spacecraft to the International Space Station. The spacecraft is planned to dock at the ISS at 4:22 p.m. Moscow time on the same day, with Fyodor Yurchikhin of Roscosmos and Jack Fischer of NASA aboard.