A federal agency may have violated the law when it licensed SpaceX to launch thousands of satellites, according to a forthcoming paper. That raises the possibility that disgruntled astronomers could sue.

The Federal Communications Commission (FCC) approved SpaceX’s request to launch thousands of satellites in March 2018 – part of the rocket company’s plan to blanket the Earth in high-speed satellite internet.

SpaceX has already launched 180 of those satellites and plans to send up additional batches every two weeks throughout 2020, for a total of 1,400 by the end of the year. The company hopes to finish the entire project, called Starlink, in 2027. By then, the network could include up to 42,000 satellites – nearly 20 times the number of operational satellites in orbit today.

But according to Ramon Ryan, a second-year law student at Vanderbilt University, the FCC might have violated a federal environmental law when it licensed the SpaceX project. Two legal experts agree, though the FCC rejects the idea.

Ryan’s paper about the potential issue, which was first reported by Jonathan O’Callaghan for Scientific American, is slated for publication later this year in the Vanderbilt Journal of Entertainment and Technology Law. He shared the paper with Business Insider as well.

„The FCC has opened themselves up to potential litigation,“ Ryan said.

„If there are lots and lots of bright moving objects in the sky, it tremendously complicates our job,“ astronomer James Lowenthal told the New York Times. „It potentially threatens the science of astronomy itself.“ 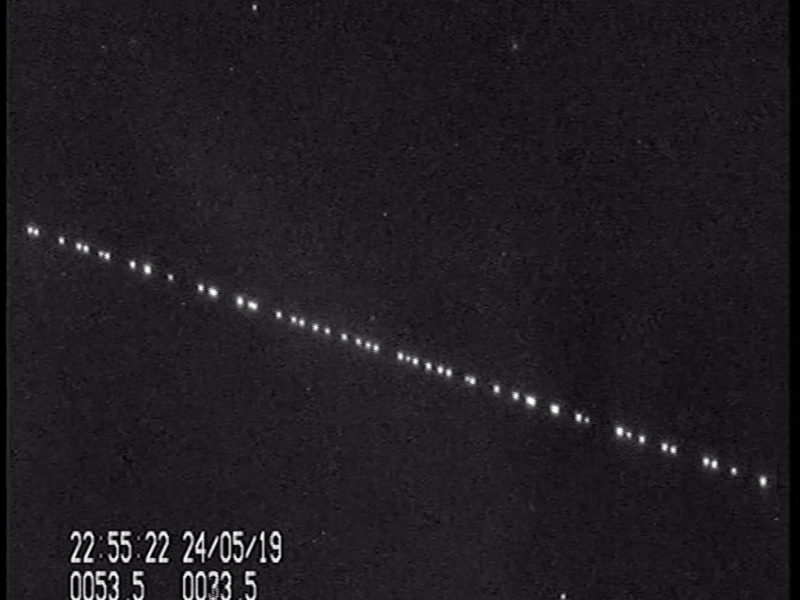 Foto: An astronomer in the Netherlands captured the Starlink train zooming across the sky shortly after its launch.sourceVimeo/SatTrackCam Leiden

Ryan wanted to find out whether astronomers could pursue any kind of legal action.

At the heart of his paper is the National Environmental Policy Act (NEPA), which was signed into law in 1970. It requires federal agencies to assess the environmental impacts of their activities before taking any action.

But some agencies are granted „categorical exclusions“ for certain activities and basic tasks that don’t affect the environment – things like processing payroll, collecting data, or installing a security system at the office. 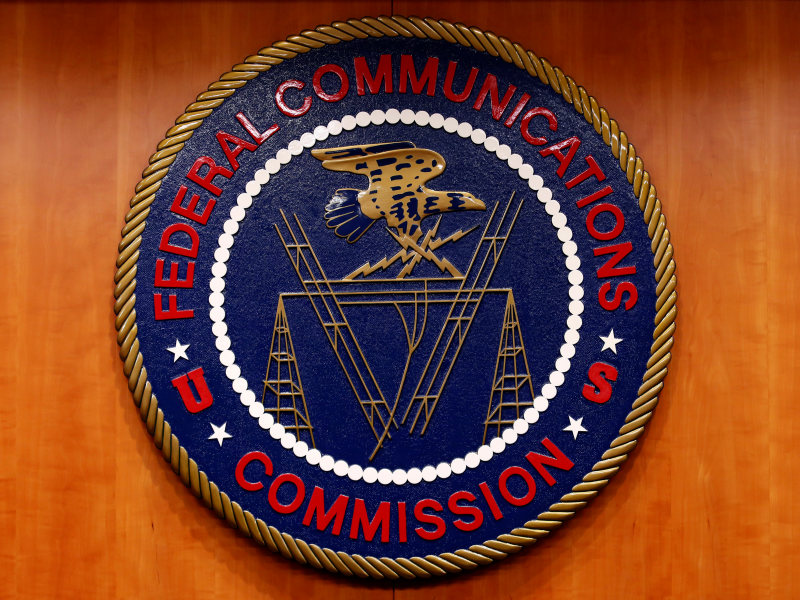 In the FCC’s case, a sweeping categorical exclusion covers most of the agency’s work, including the third-party activities it approves.

„There are other agencies that use categorical exclusions, but I don’t think there is one that’s as broad as this,“ Kevin Bell, staff counsel at Public Employees for Environmental Responsibility, told Scientific American.

The FCC only has to conduct environmental reviews under NEPA for projects that involve „high-intensity lighting,“ expose humans to unsafe levels of radiofrequency radiation, or involve facilities on protected land.

„It is a policy that was designed for another time, before large-scale space exploration,“ Bell added. 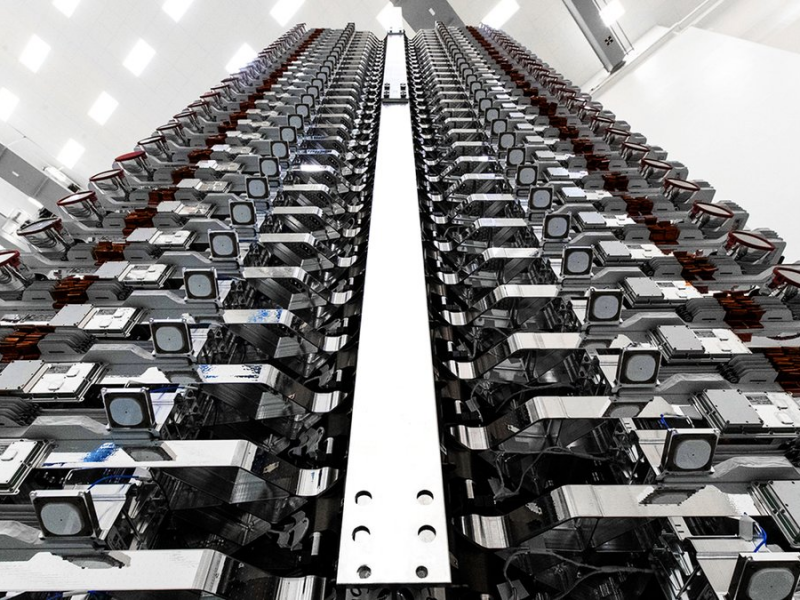 Foto: The first batch of 60 high-speed Starlink internet satellites, each weighing about 500 pounds, flat-packed into a stack prior to their launch aboard a Falcon 9 rocket on May 23, 2019.sourceSpaceX via Twitter

In its application to the FCC, SpaceX responded „No“ to a question about whether the project would „have a significant environmental impact.“ That meant nobody had to conduct a NEPA assessment of the satellites‘ effects on the environment.

SpaceX did not respond to a request for comment for this story.

Did the FCC violate NEPA?

Without conducting studies, Ryan says, the FCC can’t confirm that projects like Starlink have no significant environmental impact. That means it could be violating NEPA when it applies the categorical exclusion to them.

„I think there is a tolerable NEPA argument that can be made,“ Bell said. „The beauty of the night sky [and], for astronomers, the ability to conduct science by doing observations of the night sky are both impacts that would be covered by the statute. So there should be a case there.“

In several past lawsuits, courts have ruled against government agencies that applied categorical exclusions to activities for which they hadn’t analyzed the environmental consequences.

„That would be the end goal of this litigation, is to strike down the FCC’s broad categorical exclusion and make them tailor it to very specific instances,“ Ryan said.

If someone were to file a lawsuit against the FCC over this issue, a judge could temporarily halt future Starlink launches.

But the FCC doesn’t think Ryan’s argument would hold water.

„We strongly reject this theory,“ an FCC spokesperson said in a statement to Business Insider. „The FCC’s action in unanimously approving the SpaceX deployment was entirely lawful. The Order provides ample legal rationale based on the public record – which incidentally did not include any comments along the lines of these after-the-fact criticisms.“

The spokesperson added that the agency is aware of „concerns raised about the effect of satellites in the Starlink system on observations by astronomers,“ but said „this issue has not been raised in any FCC proceedings.“

Bright mega-constellations of satellites could obscure the stars 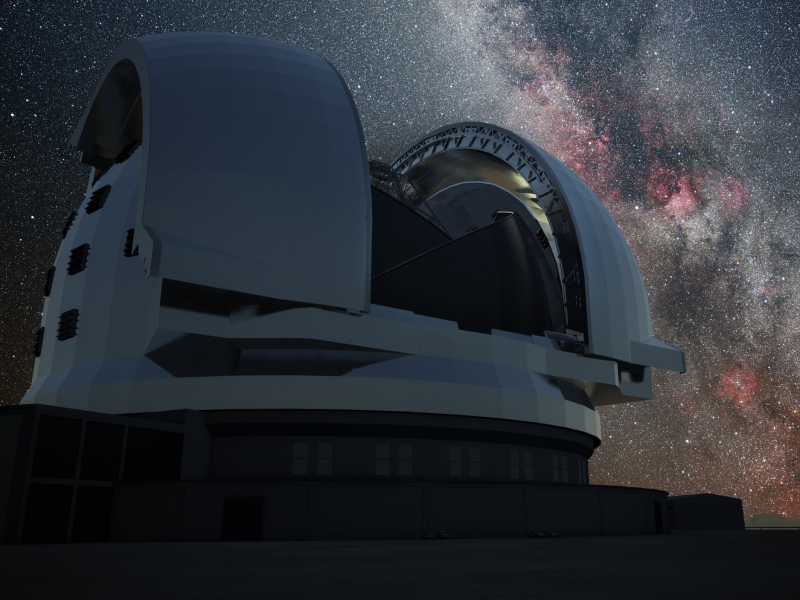 Foto: Artist’s impression of the European Extremely Large Telescope (E-ELT) at night while observations are in progress.sourceESO/L. Calçada

Astronomers‘ worst fear about Starlink is that the mega-constellation of bright satellites could completely blot out the stars, rendering researchers unable to observe the universe from Earth.

„The new megaconstellations coming online have the potential to be brighter than 99% of everything else in Earth orbit, and that’s where the concern comes from,“ Patrick Seitzer, an astronomer at the University of Michigan, told Nature.

SpaceX has pledged to find ways to reduce Starlink satellites‘ impact on astronomy. In a batch of satellites launched January 6, the company included an experimental satellite painted with a black coating to make it less reflective and, hopefully, less bright in the night sky.

Ryan thinks that because the FCC has not studied the environmental impacts of proposed satellite constellations, it would have difficulty defending its assertion that they have no significant effects in court.

„If astronomers are affected in their work, [if] it’s blocking their ability to do their jobs, then they would have standing, at least, to get into federal court,“ Sarah Bordelon, an environmental lawyer at the firm Holland & Hart, told Scientific American.

Ryan also thinks there’s an argument to be made that the project could damage the environment on an aesthetic level – which NEPA explicitly protects.

„The general public has the right to be able to look at the sky and not see 6,000 satellites flaring,“ he said.

The additional threat of mercury fuel 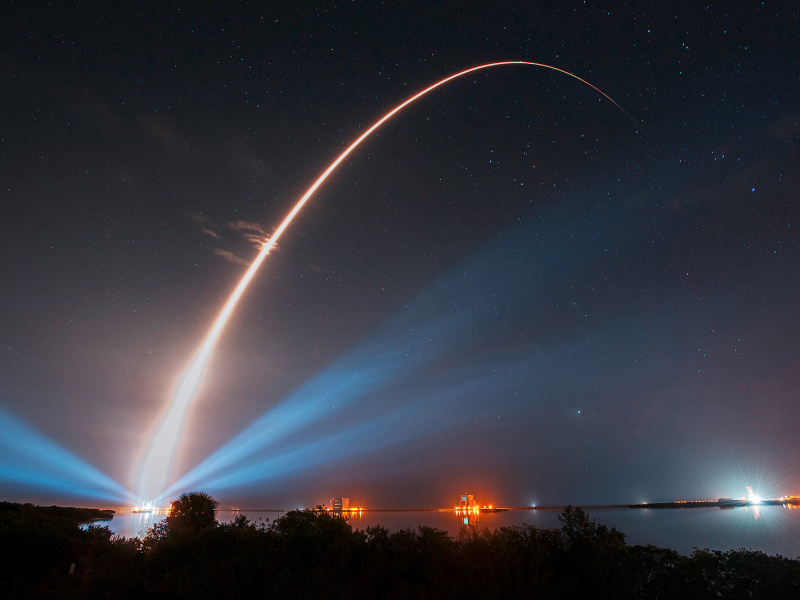 Ryan also noted the possibility of another environmental issue, though it hasn’t arisen yet: mercury fuel.

As the satellite industry booms, he said, companies might consider using this fuel because it’s cheap, effective, and performs better than some alternatives (like xenon or krypton). But mercury is a neurotoxin that can damage the human nervous system, kidneys, lungs, and immune system, as well as kill or harm wildlife. A startup called Apollo Fusion, for example, was designing satellite-propulsion systems to use mercury for fuel as of November 2018, according to Bloomberg.

NASA experimented with using mercury as rocket fuel in the 60s and early 70s, but stopped due to environmental concerns and exposure risks for technicians on the ground.

NASA, however, does not have a sweeping categorical exclusion from NEPA.

After Bell learned about Apollo Fusion’s plans, he submitted a complaint to the FCC on behalf of Public Employees for Environmental Responsibility, arguing that mercury-fueled satellites could easily slip through the FCC’s review process.

In that complaint, he calculated that an entire constellation of mercury-fueled satellites could release 200 tons of the toxic substance into the atmosphere.

„These things would just be able to be launched without anyone ever looking at the consequences of it,“ Ryan said. „That’s probably the stronger argument for having a court intervene.“