Goddard scientist Will Zhang holds mirror segments made of silicon. These X-ray optics have been baselined for the proposed Lynx X-ray Observatory.
Credits: Chris Gunn/NASA

Recent testing has shown that super-thin, lightweight X-ray mirrors made of a material commonly used to make computer chips can meet the stringent imaging requirements of next-generation X-ray observatories.

As a result, the X-ray mirror technology being developed by Will Zhang and his team at NASA’s Goddard Space Flight Center in Greenbelt, Maryland, has been baselined for the Design Reference Mission of the conceptual Lynx X-ray Observatory — one of four potential missions that scientists have vetted as worthy pursuits under the 2020 Decadal Survey for Astrophysics.

If selected and ultimately launched in the 2030s, Lynx could literally carry tens of thousands of Zhang’s mirror segments, which would offer a two orders-of-magnitude leap in sensitivity over NASA’s flagship Chandra X-ray Observatory and the European Space Agency’s Advanced Telescope for High-Energy Astrophysics, or Athena. Chandra itself offered a significant leap in capability when it launched in 1999. It can observe X-ray sources — exploded stars, clusters of galaxies, and matter around black holes —100 times fainter than those observed by previous X-ray telescopes.

In another development, Zhang and his team have secured a nearer-term flight opportunity aboard a sounding rocket mission scheduled for 2021. This would represent the technology’s first demonstration in space.

The effort to develop the new optic began seven years ago when Zhang began experimenting with mono-crystalline — a single-crystal silicon that had never before been used to create X-ray mirrors. These specially fabricated optics must be curved and nested inside a cylindrically shaped container so that highly energetic X-ray photons graze their surfaces and deflect into an observatory’s instruments rather than passing through them. 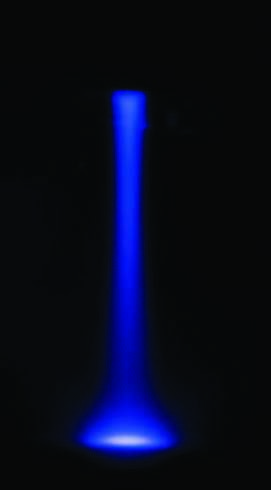 This particle beam polishes the surface of a new X-ray optic made of silicon.
Credits: Chris Gunn/NASA

His goal — given the cost of building space observatories, which only increase in price as they get larger and heavier — was to develop easily reproducible, lightweight, super-thin mirrors, without sacrificing quality.

“What we’ve done is shown from a scientific perspective and empirically that these optics can be built” using an inexpensive, abundantly available material that is immune from the internal stresses that can change the shape of X-ray mirrors made of glass, the more traditional mirror-making material, Zhang said.

Reviews conducted by a NASA-commissioned panel of 40 experts deemed that Zhang’s optics made of the brittle, highly stable silicon material are capable of the same image quality as the four pairs of larger and heavier mirrors flying on Chandra. The panel also deemed two other technologies – full-shell mirrors and adjustable optics – as being able to fulfill the requirements of the conceptual Lynx Observatory.

Not only could Zhang’s mirrors provide 0.5 arc-second resolution — comparable to the image quality afforded by ultra-high-definition television — they also met Zhang’s low-mass requirements. They are 50 times lighter and thinner than Chandra’s, Zhang said. This means future observatories could carry far more mirrors, creating a larger collection area for snagging X-rays emanating from high-energy phenomena in the universe.

But Zhang said he and his team are still “far, far away from flying our optics.”

He and his engineering team now have to figure out how to bond these fragile mirror segments inside the canister, which protects the entire mirror assembly during a rocket launch and maintains their nested alignment.

“We have a lot to do, and not a lot of time to do it,” Zhang said. “This is now an engineering challenge.”

Time is of the essence, he added. Just two years from now, Zhang’s team must deliver a 288-segment mirror assembly to Randall McEntaffer, a professor at Pennsylvania State University in State College who is developing a sounding rocket mission called the Off-plane Grating Rocket Experiment, or OGRE, expected to launch from the Wallops Flight Facility in 2021. In addition to the mirrors, OGRE will carry a university-developed spectrograph equipped with next-generation X-ray diffraction gratings used to split X-ray light into its component colors or wavelengths to reveal an object’s temperature, chemical makeup, and other physical properties.

OGRE will do much to advance the mirror assembly, Zhang added. The mission will help determine whether the team’s design can protect the fragile nest of mirrors from extreme launch forces experienced during liftoff and ascent through Earth’s atmosphere.

X-ray observatories like Chandra give us a new view of our universe beyond what we can see with our eyes. Now a team at NASA’s Goddard Space Flight Center is working to take X-ray astronomy to the next level. Goddard astrophysicist Dr. William Zhang believes his mirrors can show us what’s happening near supermassive black holes like the one in the center of our Milky Way galaxy. Here’s how the mirrors come together.
Credits: NASA

Zhang envisions a bright future for the team’s optics. Even if Lynx isn’t chosen for development by the 2020 Decadal Survey, other proposed missions could benefit, Zhang said. These include a couple X-ray observatories now being investigated as potential astrophysics Probe-class missions and another now being considered by the Japanese.

“Five years ago, people said it couldn’t be done, but we proved our ideas,” Zhang said. “My team is grateful to Goddard’s Internal Research and Development program for giving us the seed money. We couldn’t have achieved this without it.