This image of the horizon was seen from the cockpit of NASA Armstrong Flight Research Center’s F/A-18 research aircraft during a flight in support of the Quiet Supersonic Flights 2018 research series, or QSF18. NASA test pilots performed the quiet supersonic dive maneuver off the coast of Galveston, Texas, creating a quieter version of the sonic boom to obtain recruited community survey feedback data. The test pilot climbed to around 50,000 feet, followed by a supersonic, inverted dive. This maneuver creates sonic boom shockwaves in such a way that they are quieter in a specific area. Meanwhile, NASA researchers match community feedback to the sound levels of the flights, using an electronic survey and microphone monitor stations on the ground. This is preparing NASA for community response models for the future X-59 QueSST.

NASA has updated the date for the media day event at which journalists are invited to learn about the agency’s Quiet Supersonic Flights 2018 campaign. The event will now take place Tuesday, Nov. 13, in the Houston area.

Test pilots and project leads will be available for interviews and to share information about the flight series, known as QSF18, and its contributions to NASA aeronautics research. Media also will get a close-up look at flight operations with NASA’s F/A-18 research aircraft as they are used to test community response over Galveston, Texas, using a “quiet thump” technique designed to reduce loud sonic booms typically associated with supersonic flight.

The event is weather-dependent, but is currently scheduled to begin at 10 a.m. CST at Ellington Field, just north of NASA’s Johnson Space Center in Houston, then moves to Galveston, where QSF18 field team members operating microphone stations will measure sound levels. Reporters will have an opportunity to observe the field equipment and interview personnel during periods between quiet thumps.

What Did You Hear? Be a QSF18 Citizen Scientist

For two weeks starting November 5, 2018, we flew a NASA research aircraft at supersonic speed over the Galveston area during the mornings and/or afternoons.

Usually an aircraft flying that fast makes a very loud sonic “boom!” sound. But for these tests, we flew a unique pattern that created a much quieter sound over the land.

We did this in order to test sensor equipment and survey tools used to collect data about the sounds from the ground and from 500 official community participants who live in the “Community Response Survey Area.”

The area where people might hear the quiet “thump” sound was bigger than the official response survey area, so we conducted this citizen science activity to also collect responses from people not participating in the official survey or who lived in the official "Community Response Survey Area."

Then use the Citizen Science form on this page to record your responses (e.g., time, location, perception of sound). You are not required to enter any personal information.

(NOTE: This citizen science activity was informal and not the same as the formal process of collecting official responses from pre-selected community volunteers. However, all responses will be reviewed by NASA researchers following the flight campaign.)

(NOTE: Display of responses is delayed by 24 hours to ensure covering all flights from preceding flight day.)

THANK YOU FOR PARTICIPATING! 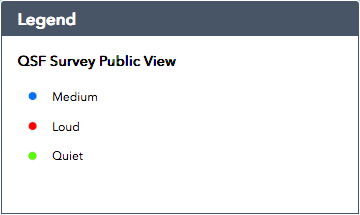 NASA will fly its supersonic F/A-18 jet over the Gulf of Mexico while researchers measure public response to the aircraft’s noise in and around the coastal city of Galveston, Texas.

The F/A-18 pilot will fly a unique diving maneuver over the Gulf of Mexico that will result in the possibility of Galveston area residents hearing a quiet sonic “thump” instead of the loud and sometimes disruptive sonic booms historically associated with supersonic flight.

NASA is recruiting via mail some 500 residents to participate in the two-week-long research activity. Participants will be asked to fill out a brief online survey several times each day about their impressions of any noise they hear from the F/A-18 jet. Residents who participate for the full duration will be paid $50.

The city of Galveston was selected because its coastal location enables the F/A-18 to fly a supersonic maneuver that sends a quieter sonic “thump” toward Galveston and confines louder sonic booms to the open water of the Gulf of Mexico. NASA’s nearby facilities at Ellington Field also will enable more efficient aircraft operations.

NASA researchers will place sound-measuring equipment in and around Galveston to supplement the public response data. Locations will be selected based on research needs and approval from local authorities.

To ensure public safety and awareness, NASA is cooperating with local, state and federal authorities and conducting an extensive public outreach initiative in support of this research.

Results from this activity in Galveston will inform research methods for future community response surveys that will use NASA’s X-59 Quiet Supersonic Technology aircraft.

NASA’s Low-Boom Flight Demonstration, which includes QSF18, is a comprehensive, scientifically-driven effort to provide U.S. and international regulators with statistically valid data that could result in new rules that allow commercial supersonic flight over land.

Starting on November 5, NASA will begin flying F/A-18 research aircraft, one of them pictured here, to perform a special dive maneuver that will create a sonic boom out over the Gulf of Mexico in such a way that residents in Galveston would perceive it as a quiet thump – that is, if they are able to hear them at all.
Credits: NASA/Lauren Hughes

NASA is set to begin a series of quiet supersonic research flights off the coast of Texas near Galveston to test ways to measure the community’s response to a unique acoustic experience.

Normally, an aircraft flying at supersonic speeds (faster than Mach 1, the speed of sound) produces a sonic boom so loud that, today, commercial supersonic flight is prohibited over land.

Beginning Nov. 5, however, NASA test pilots will fly an F/A-18 supersonic research aircraft in a unique maneuver that creates a quieter “thump.” Capturing how people and sensors on the ground respond to that sound is the goal for the Quiet Supersonic Flights 2018, or QSF18, campaign.

“QSF18 is a big step in NASA’s efforts to understand what is required for acceptable supersonic overland flight,” said NASA’s Commercial Supersonic Technology ProjectManager Peter Coen. “This is the first time in decades that we have reached out to a large community as part of our supersonic research. NASA has performed similar tests at our Armstrong Flight Research Center, using similar sounds created by the same F/A-18. We’ve measured the noise levels and the impact on structures, as well as surveyed people for annoyance, to make certain that these tests are safe and well-planned. We greatly appreciate Galveston’s interest and support.”

The F/A-18 is a typical supersonic aircraft so, in order to shush the boom, it will be put into a quiet supersonic dive maneuver. Starting out over the water at around 50,000 feet the aircraft will be put into a special dive that still creates a regular sonic boom, however when the sound reaches land it should be heard as a quieter “thump” instead.

QSF18 is unique for another reason. For the first time, NASA’s Johnson Space Center, located just north of Galveston, will provide critical support for a NASA activity is about flight but not into space! The center’s flight operations staff are part of the team supporting the QSF18 aircraft, pilots and other crew based out of nearby Ellington Field.

“NASA’s role as a leader into new frontiers paves the way forward towards new technologies, opportunities, and milestones across multiple endeavors, as we have always done throughout our history,” said Mark Geyer, director of NASA’s Johnson Space Center. “As our efforts also continue to expand our boundaries and capabilities in space, Johnson Space Center is proud to be working with our colleagues at NASA’s research centers at Langley and Armstrong, and to take part in the agency’s aeronautics research efforts to lead aviation into a new era as ‘One NASA.’”

In Galveston, community feedback data will be gathered through the use of a survey, in which 500 recruited volunteer residents, if they hear the thumps, will define the level at which they were able to perceive the sound. QSF18 data will be used to help NASA better understand successful data collection methods for future flights using an experimental aircraft called the X-59 Quiet Supersonic Technology, or QueSST, demonstrator. Starting in 2022, the X-59 will directly fly over yet-to-be-selected communities to collect data using lessons learned from QSF18.

“Galveston is both honored and excited to be part of this project,” said Galveston Mayor James Yarbrough. “This is the type of project that motivates engineers and innovators. In Galveston, we have a long and proud history of being involved in advances in science and technology, whether that’s in medicine, rail, or shipping. In this case, our residents will have an opportunity to participate in a study to advance aviation and the design of commercial planes that can break the sound barrier quietly. We’re excited to be a small part of it, and we’ll do what we can to support NASA and help ensure the success of this study. Thanks to NASA for choosing Galveston as the location for testing this idea.”

While the “quiet thumps” produced by the F/A-18 present no risk of causing physical damage to people or structures, NASA has learned that elements such as atmospheric turbulence and humidity can influence how certain areas may perceive the sound, which may be heard differently from other areas. NASA will operate a number of microphone stations in the area to match up the community’s response with the decibel level of each sonic thump.

Additionally, NASA will have resources available to residents who would like to learn more about supersonic flight research, and how it may help lead to an exceptional reduction in commercial flight times. NASA has committed to engage the educators and youth of the Galveston area, through STEM learning activities. This features two web-based opportunities, including a “Seeing Sound” learning module, with classroom activities for students, and a citizen scientist activity for anyone in the Galveston area to submit data on the sounds they hear. (This activity is separate from the process of collecting official data responses from pre-selected community volunteers.)

A NASA F/A-18 demonstrates the quiet supersonic dive maneuver over NASA’s Armstrong Flight Research Center in California, creating a quiet thump in a necessary area instead of a louder sonic boom. NASA has used microphones to measure the levels of these sounds, and has studied the thumps to confirm they pose no danger to people, animals or structures.
Credits: NASA/Lauren Hughes