Even 50 years later, Apollo 7 is still remembered as one of the most important first test flights of any spacecraft. 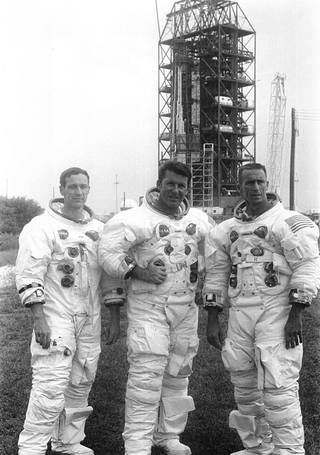 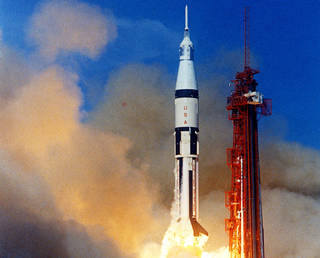 Apollo 7 lifts off from Cape Kennedy (now Cape Canaveral) Air Force Station's Launch Complex 34 on Oct. 11, 1968. It was the first of several piloted flights designed to qualify the spacecraft for the half-million-mile round trip to the Moon.
Credits: NASA

On Oct. 11, 1968, NASA launched its first crewed Apollo mission, which paved the way for the moon landing less than a year later.

The Apollo 7 crew was commanded by Walter Schirra, with Command Module Pilot Donn Eisele, and Lunar Module Pilot Walter Cunningham. The mission consisted of an 11-day Earth-orbital test flight to test the Apollo command and service module. It was also the first time a crew flew on the Saturn IB rocket.

Although Apollo 7 was a complete technical success, it was born out of a tragedy. After the fatal fire that took the lives of the Apollo 1 crew—Gus Grissom, Roger Chaffee, and Ed White—the Apollo 7 crew took over the mission.

Apollo 1 was supposed to be the first crewed Apollo mission. During a launch rehearsal test at Cape Kennedy, an electrical fire broke out in the cabin. Because the cabin atmosphere was pure oxygen, the fire spread incredibly quickly. The fire also created intense pressure inside the cabin, and because the hatch could only swing inward, the crew was stuck inside.

All further crewed missions had to wait until NASA could determine the sources of the mishap—technical and organizational—and ensure that nothing like it would happen again. In the 21 months between Apollo 1 and Apollo 7, the Apollo spacecraft and spacesuits were redesigned to more safely fly crews to space.

While Apollo 4, 5, and 6 practiced some of the maneuvers necessary to build up to a lunar landing, such as the first flight of the Saturn V rocket and high-speed reentry, none of these missions were crewed. (Apollo 2 and 3 were skipped in the sequence out of respect to the Apollo 1 crew.)

By late 1968, NASA was ready to move forward from the Apollo 1 disaster and work toward landing on the moon. The Apollo 7 crew not only had to take over the mission that their friends and colleagues had died training for, but they have to prove to the world that the Apollo program was still in good shape to continue.

“Gus would be the first person to say, ‘Let’s get on with it. Do good work,’” said Apollo 7 Commander Wally Schirra, reflecting on the mission.

On Oct. 11, Apollo 7 launched from Cape Kennedy Air Force Station, Florida. The Saturn IB rocket performed well and the liftoff was smooth. Aside from minor hardware problems, there were no significant problems or anomalies during the flight. The Apollo Command and Service Module passed the test and cleared the way for Apollo 8 to complete its lunar orbit, and instilled the confidence in the Apollo 11 crew to land on the moon. Apollo 7 was not only the first three-person American space mission, but it was also the first to include a live television broadcast from inside an American spacecraft.

Eleven days after the launch, the Apollo 7 crew splashed down south of Bermuda and the crew was instantly celebrated for their success.

“It was the longest, it was the most ambitious, and most successful first test flight of any new flying machine, ever,” said Apollo 7 Lunar Module Pilot Walter Cunningham. “And it’s still true today, 50 years later.”