The sample size of NWA 11119 was similar to that of a baseball.

Scientists believe the solar system was formed some 4.6 billion years ago when a cloud of gas and dust collapsed under gravity possibly triggered by a cataclysmic explosion from a nearby massive star or supernova. As this cloud collapsed, it formed a spinning disk with the sun in the center.

Since then scientists have been able to establish the formation of the solar system piece by piece. Now, new research has enabled scientists from The University of New Mexico, Arizona State University and NASA's Johnson Space Center to add another piece to that puzzle with the discovery of the oldest-ever dated igneous meteorite.

The research titled, Silica-rich volcanism in the Early Solar System Dated at 4.565 Ga (billion years), was published today in Nature Communications. This research provides direct evidence that chemically evolved silica-rich crustal rocks were forming on planetsimals within the first 10 million years prior to the assembly of the terrestrial planets and helps scientists further understand the complexities of planet formation.

“The age of this meteorite is the oldest, igneous meteorite ever recorded,” said Professor and Director of the UNM Institute of Meteoritics Carl Agee. “Not only is this just an extremely unusual rock type, it's telling us that not all asteroids look the same. Some of them look almost like the crust of the Earth because they're so light colored and full of SiO2. These not only exist, but it occurred during one of the very first volcanic events to take place in the solar system.”

The research started to unfold at UNM when graduate student and lead author Poorna Srinivasan, asked Agee for ideas on her Ph.D. thesis. Agee had a yet-to-be studied crustal rock that was found in a sand dune in Mauritania by a nomad that he received from a meteorite dealer. The rock was lighter in color than most meteorites and was laced with green crystals, cavities and surrounded by quench melt. He gave the sample to Srinivasan who began to study the mineralogy of the rock, Northwest Africa (NWA) 11119.

"This research is key to how the building blocks of planets formed early in the solar system. When we look out of the solar system today, we see fully formed bodies, planets, asteroids, comets and so forth. Then, our curiosity always pushes us to, to ask the question - How did they form?" - Professor Carl Agee

“The mineralogy of this rock is a very, very different from anything that we've worked on before,” said Srinivasan. “I examined the mineralogy to understand all of the phases that comprise the meteorite. One of the main things we saw first were the large silica crystals of tridymite which is a similar to the mineral quartz. When we conducted further image analyses to quantify the tridymite, we found that the amount present was a staggering 30 percent of the total meteorite – this amount is unheard of in meteorites and is only found at these levels in certain volcanic rocks from the Earth.”

Part of Srinivasan’s research also involved trying to figure out through chemical and isotopic analyses what body the meteorite could be from. Utilizing oxygen isotopes done in collaboration with Dr. Karen Ziegler in UNM’s Center for Stable Isotope (CSI) lab, she was able to determine that it was definitely extraterrestrial.

“Based on oxygen isotopes, we know it's from an extraterrestrial source somewhere in the solar system, but we can't actually pinpoint it to a known body that has been viewed with a telescope,” said Srinivasan. “However, through the measured isotopic values, we were able to possibly link it to two other unusual meteorites (Northwest Africa 7235 and Almahata Sitta) suggesting that they all are from the same parent body – perhaps a large, geologically complex body that formed in the early solar system.” 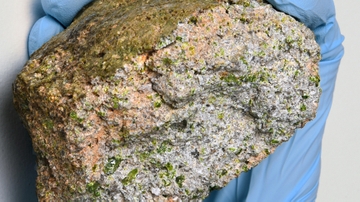 The sample size of NWA 11119 was similar to that of a baseball.

One possibility is that this parent body was disrupted through a collision with another asteroid or planetesimal and some of its ejected fragments eventually reached the Earth’s orbit, falling through the atmosphere and ending up as meteorites on the ground – in the case of NWA 11119, falling in Mauritania at a yet unknown time in the past.

“The oxygen isotopes of NWA11119, NWA 7235, and Almahata Sitta are all identical, but this rock – NWA 11119 – stands out as something completely different from any of the over 40,000 meteorites that have been found on Earth,” said Srinivasan.

Further, research using an inductively coupled plasma mass spectrometry was performed in the Isotope Cosmochemistry and Geochronology Laboratory (ICGL) at the Center for Meteorite Studies at Arizona State University to determine the precise formation age of the meteorite. The research confirmed that NWA 11119 is the oldest-ever igneous meteorite recorded at 4.565 billion years.

“The purpose of this research was to understand the origin and formation time of an unusually silica-rich igneous meteorite,” says co-author and ASU’s Center for Meteorite Studies director, Meenakshi Wadhwa. “Most other known igneous asteroidal meteorites have ‘basaltic’ compositions that have much lower abundances of silica – so we wanted to understand how and when this unique silica-rich meteorite formed in the crust of an asteroidal body in the early Solar System.”

Most meteorites are formed through the collision of asteroids orbiting the sun in a region called the asteroid belt. Asteroids are the remains from the formation of the solar system formation some 4.6 billion years ago. The chemical composition ranges of ancient igneous meteorites, or achondrites, are key to understanding the diversity and geochemical evolution of planetary building blocks. Achondrite meteorites record the first episodes of volcanism and crust formation, the majority of which are basaltic.

“The meteorite studied is unlike any other known meteorite,” says co-author and ASU School of Earth and Space Exploration graduate student Daniel Dunlap. “It has the highest abundance of silica and the most ancient age (4.565 billion years old) of any known igneous meteorite. Meteorites like this were the precursors to planet formation and represent a critical step in the evolution of rocky bodies in our solar system.”

“This research is key to how the building blocks of planets formed early in the solar system,” said Agee. “When we look out of the solar system today, we see fully formed bodies, planets, asteroids, comets and so forth. Then, our curiosity always pushes us to, to ask the question - How did they form? How did the Earth form? This is basically a missing part of the puzzle that we've now found that tells us these igneous processes act like little blast furnaces that are melting rock and processing all of the solar system solids. Ultimately, this is how planets are forged.”