Time-lapse of Shuttle Training Aircraft lifted to display at U.S. Space & Rocket Center
One of only four retired NASA Shuttle Training Aircraft was moved into position for display at the U.S. Space & Rocket Center in Huntsville, Alabama Monday March 6th. This modified Grumman Gulfstream II aircraft was used to train shuttle astronaut pilots as its controls & handling characteristics were similar to the Space Shuttle. It was primarily used to practice landings at the Shuttle Landing Facility in Florida and the White Planes Space Harbor in Mew Mexico.

All told, 56 astronauts flew the aircraft for approach and landing training. Many more flew on board the aircraft in other positions or as passengers, including Space Camp alumna Dottie Metcalf-Lindenburger.

Some significant astronauts who have flown this aircraft include:

In 2011 NASA announced that the fleet of Shuttle Training Aircraft would be retired at the end of the shuttle missions. The N945 aircraft was stored at the Birmingham-Shuttlesworth International Airport until March 2017 when it was brought to the U.S. Space & Rocket Center in pieces to be reassembled and placed on display.

Monday the aircraft was lifted by two cranes and mounted to concrete piers. The move was not without its moments as at one point in the move one of the cranes lost its balance and the aircraft fell several feet to the ground.  However it was not significantly damaged and after adding more counterweight and repositioning the cranes the aircraft was successfully mounted for display.

Plans are to construct a platform that will allow visitors to view the interior of the plane which is on display near the Pathfinder Shuttle display. 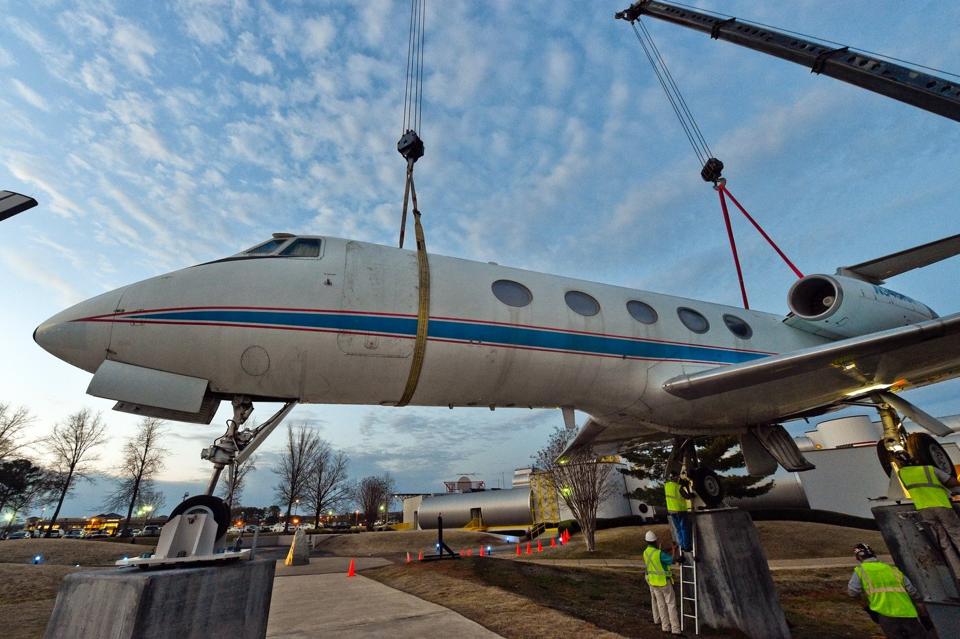