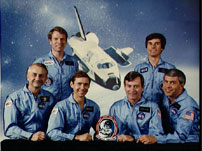 The launch set for Sept. 30 was delayed 28 days due to a suspect exhaust nozzle on the right solid rocket booster. The problem was discovered while the shuttle was on the launch pad. The shuttle returned to the Vehicle Assembly Building (VAB) and was demated. The suspect nozzle was replaced and the vehicle restacked. The countdown on Nov. 28 proceeded as scheduled.

This flight carried first Spacelab mission and first astronaut to represent the European Space Agency (ESA), Ulf Merbold of Germany. ESA and NASA jointly sponsored the Spacelab-1 and conducted investigations which demonstrated the capability for advanced research in space. Spacelab is an orbital laboratory and contains an observations platform composed of cylindrical pressurized modules and U-shaped unpressurized pallets which remain in the orbiter's cargo bay during flight. Altogether 73 separate investigations were carried out in astronomy and physics, atmospheric physics, Earth observations, life sciences, materials sciences, space plasma physics and technology. This was the first time six persons were carried into space on a single vehicle.
---
Frams von STS-9 Columbia-Spacelab1-Mission NASA-Video: